Posted in: Disc Reviews by Brent Lorentson on January 4th, 2016 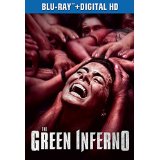 It’s been a long wait for those of us wanting to see Eli Roth’s return behind the camera since Hostel 2 hit the screens. I’ve been more than a little excited since hearing about Roth’s plans to bring the cannibal genre to its jungle roots.  It’s been long enough since audiences have been shocked by the ferocity we haven’t seen from the genre since Cannibal Holocaust and Cannibal Ferox.  Sadly, the intentions were there, but the execution just fell short.  Instead of getting the shock and gore we’ve come to expect since Cabin Fever and Hostel 1&2, this time around we get a film that feels a little restrained.

Justine (Lorenza Izzo) is a college freshman who desperately feels the need to protest against the injustices in the world but hasn’t quite found a cause worth fighting about.  That is, until in one of her classes the subject of female circumcision is brought up.  It’s a subject that offends and disgusts, and it’s one of Roth’s moments to interject his “agenda” upon the audience.  Though for most viewers they will simply pick up on this scene as being a way to foreshadow some of the brutality to come.

One of her classmates, Jonah (Aaron Burns) catches up to Justine and extends an invitation to come to one of his group’s meetings. It’s at the meeting she is introduced to the leader of the activist group, Alejandro (Ariel Levy), who seems to believe he’s the on-campus version of Che Guevara.  Despite the opposition of Alejandro and his stink eye girlfriend Kara (Ignacia Allanand), Justine sticks around with the group.  When an opportunity to save the rainforest comes along, Justine sees her opportunity to make a difference and prove herself not just to the group, but to her overprotective father.

By the time the group arrives to the jungle, I’m sure I wasn’t the only horror fan feeling as though they were misled. Where’s the horror? Where’s even the slightest hint of violence?  Well, the wait is just a bit longer.  When they do arrive to the spot in the jungle where companies are searching for gas, as the plan unfolds in their attempt to stop bulldozers, well, the urge to reach through the screen and smack these students is one that will be hard to resist.  After all, their dangerous stunt seems to be for nothing more than some social media publicity.  I’m approaching this from the standpoint that Roth is more poking fun at these activists rather than endorsing them, simply because the members of the group just seem to hit every cliché in some over-the-top manner.

It’s during their flight out of the jungle where things go horrifically wrong and their plane crashes.  Stranded in the middle of nowhere, the few who survive are quickly surrounded by vicious natives who believe the activists are part of the same group that wishes to destroy their village, and it is here where things just go to hell for those who survived.

As the villagers lead the survivors from the river to the center of the village, we are given some imagery that is equally beautiful as it is horrifying as the survivors are greeted with heads on spikes and corpses that have been stripped clean of their flesh.  It’s not pretty, and before they can have chance to dwell on what will possibly be done to them, Jonah is pulled from the group and is laid out onto a rock and brutally butchered.  The camera doesn’t flinch, nor does it look away as we watch the cruel demise of this character and expect only the same or worse will come to those who remain.

As I mentioned about the camera not looking away, this gets to be my biggest complaint about the film, the decision to constantly let the camera cut in and out of focus.  It’s addressed in the commentary to look like an amateur documentary, but the problem with that is the film never had a documentary feel to begin with.  It would be one thing if the film had this style from the opening scene, but instead this is a stylistic change that occurs past the midpoint of the film, and it just becomes distracting.

The decision to shoot the film during the daytime does to some degree remove a lot of the dread, yet at the same time this misdirection never lets the viewer feel the characters are ever safe. This is most unsettling in a scene where the women are pulled aside and are inspected. Once it is decided which girl is to be picked it is left to our imagination what is to follow; even when the character is seemingly returned unharmed, she has no recollection as to what has been done to her.  Personally I wish this was played with more, but instead it feels like a wasted moment as the characters put their heads together and concoct such a ridiculous escape plan they even dub it “the Scooby-doo plan”.

What I feel most viewers will find the most frustrating is the film’s final moments.  It’s a sequence that has a character saying things that we know as a viewer it is all a lie, but I can’t understand why they would say such things.  I have an opinion of my own about it, but to discuss it would be far too deep into spoiler territory. But even if I were to be correct, it’s kind of absurd to have this scene. Yet it goes a step further, and rather than simply ending the film, it just lingers too long.

In the end the film just left me cold.  It was entertaining, but it lacked the emotional punch to the gut.  You never care enough about the characters; even the ones you dislike are given mostly predictable kills, and for the ones you do like the impact just isn’t there.  Just because it’s graphic doesn’t make it emotional. And that is what is missing from this film, the emotional investment to anyone.  It’s a shame, because I feel that Roth was scratching the surface of something great here but never quite got there.

The Green Inferno is presented in a 2.40:1 aspect ratio.  The 1080p image is arrived at with an AVC MPEG-4 codec at an average of 34mbps.  With the glut of found-footage horror films, it is nice to finally have a film that is filled with such rich and colorful scenery.  The Amazonian jungle and all its colors pop in this format; most prominent is of course green, but red as well.  Being shot in HD with the Canon C300, we are given plenty of rich detail in the characters, from the painted villagers, to gory morsels of flesh of the dispatched activists.  Though I’m not a fan of all the camera work, the quality of the picture is sharp and clear.

The DTS-HD Master Audio 5.1 track is kind of track a horror film needs to not only immerse the viewer but to help deliver the swift kick to the gut.  Everything from the jungle ambient noise of the birds and other creatures of the jungle, along with the buzz of flying insects, this is a detail that is subtle but works well.  But where the SFX really come together are on the brutal scenes of violence.  There is a certain scene in particular with the sound cue for when an eye gouge occurred that I felt appropriately nauseated.  The audio quality of the cast is clear as well, even in moments with multiple characters talking or in some cases screaming.

Audio Commentary:  Director El Roth heads up the commentary with his producer Nicolas Lopez and several members of the cast.  Though the commentary is filled with numerous bits of behind-the-scenes information, what I found irritating is that there are simply too many people talking on this one track. At times we have them talking over one another, and as a listener you feel with some of these stories there could have been so much more to get out of this had there been simply another track designated for just the cast.  It’s a quibble of mine simply because there are no behind-the-scenes features with the film.

Photo Gallery:  We get a series of production photos and screen grabs from the film, but that is all.

I really wanted to embrace this film.  I love cannibal films, but this film just didn’t deliver the goods.  It’s not a bad film by any means; it just leaves you wanting so much more, and it leaves the viewer feeling a bit cheated.  It does have its moments, but it is just not enough to take this film to the next level.

Brent Lorentson is a horror writer and film critic based out of Tampa, Florida. With a BA in Digital Film, he co-wrote and co-directed Scavenger Hunt. His short stories have appeared in various horror anthologies. In 2019 his short script Fertile Blood will be a part of the anthology horror film Slumber Party. He is currently working on his first novel A Dark and Secret Place set to be released in late 2019. Favorite Films: Taxi Driver, Fight Club, I Saw the Devil, The Wild Bunch, Dawn of the Dead, A Clockwork Orange, Pulp Fiction, Heathers, The Monster Squad, and High Fidelity.
Wrecker The Visit (Blu-ray)