Posted in: Disc Reviews by Gino Sassani on February 17th, 2016 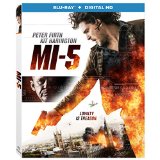 On the surface MI-5 looks to be a mundane direct-to-video film attempting to cash in on a couple of things. Mission Impossible: Rogue Nation is the fifth in the series and often referred to as MI:5. The new James Bond film has a plot involving the head of MI-5 attempting to take down the MI-6 department and our beloved 007. None of these would contribute to the fortuitous name. Rather it’s the difference in racial sensitivity between Britain and the United States. MI-5 is actually a feature-film version of the long-running British series Spooks. The film’s original title happens to be Spooks: The Greater Good. It seems that even foreign nations have noticed we can be offended by words that have completely innocent meanings so long as someone out there can find an offensive albeit completely unintended meaning. Don’t believe me? Just check in with how many sports media refer to the Washington Redskins these days. It’s unfortunate, because I like the original title. It’s more original. MI-5 is so generic these days.

If you’re up on the show, you already know the Intelligence Chief of MI-5, Harry Pearce, still played by Peter Firth. After 10 years he’s now a disgraced agent and on the run after terrorist Adam Qasim (Gabel) escapes from a prisoner transport that Pearce was in charge of conducting. Some inside the agency think that Pearce was a part of the escape plan.

Enter decommissioned agent Will Holloway, played by newcomer Kit Harington. Harington may well be new to the series, but his character is not new to Pearce. They are connected in two crucial ways. It was Pearce who decommissioned him, and Pearce was present when his father was killed in the field. MI-5 brings him in literally from the cold where he had his own op going in Russia. They put him on Pearce, where a game of trust and distrust play out between the two. Throughout the film we never quite know who the good guys and the bad guys happen to be. Two things are certain here. The first is that someone high in the command chain is a mole and the second that Qasim is planning something big.

It’s very much a cat-and-mouse game throughout the film. The two leads are rarely actually together. There’s a Bourne Identity element here with our heroes having to work outside the agency. Still they can’t even be sure that they can trust each other. In the end Pearce is out to clean out his own agency as much as he wants to stop a terrorist attack. In the background the escaped terrorist is causing the American CIA to attempt a takeover of MI-5 because they view them as insecure. Too many players make the plot a bit hard to follow at times, and some of it is unnecessary. Add that to concerns of people like myself who have never seen the actual series. Let me at least put that worry to rest.

You do not have to have seen any of television show to keep up here. The story is completely self-contained. That doesn’t mean there isn’t enough for the fans to enjoy. There are obvious references to the show and an early reflective scene that finds Pearce at the grave of the show’s analyst Ruth Evershed. There’s some background here, to be sure, and it’ll be a nice little extra for the show’s fans.

I can’t really compare the two, but this film does a pretty nice job of combining action with character moments. For some there might be too much of the latter, but I found it to be a nice balance. There’s also enough of the globetrotting that we look for in our British spy films. Still most of the action takes place in London, where they managed to find some of the lesser-used locations. There have been a ton of productions filmed in London, and too many use the same reference locations. I liked that I saw many locations I hadn’t seen before. Yes, the landmarks are represented. There’s a rather nice little romp through Heathrow Airport. I’m sure Londoners appreciated the little nods to what I’m sure they think of as the “real” London.

MI-5 is presented in its original aspect ratio of 2.40:1. The 1080p image is arrived at with an AVC MPEG-4 codec at an average 25-30 mbps. The high-definition image presentation is quite sleek and glossy. I certainly get the feel of a British television production. But the budget of a feature film does come through. There’s nice detail even during the high-action scenes. Black levels are rich with pleasantly rich blacks and nice subtle shadow definition. They aren’t called upon often. Most of the film occurs in bright exterior shots that can even be a little harsh at times.

The DTS-HD Master Audio 5.1 is not going to blow away your system Dialog is the main point here, and it’s served finely enough. The action scenes deliver a little more dynamic range, but I have to say that the subs don’t ever quite live up to the challenge. Surrounds stay strictly in the background, and the score stays subdued.

The Making Of MI-5: (11:16) Cast and crew offer the usual insights. There’s a disclaimer about the original title. I’m a bit offended that the producers think of Americans as being so easily offended. There’s plenty of behind-the-scenes footage and the usual too many clips. There’s some info to tie in the production with the television show and an expectation there will be more.

Deleted Scenes: (5:37) There are three with a play-all option.

I think this will appeal to fans of the spy genre and satisfy the television show fans. I do get the idea that this is a passing-of-the-baton kind of thing. The Holloway character appears to be the future if the franchise continues. With a mix of old and new, it appears this decade-old show “might still have a trick or two”.

Gino Sassani is a member of the Southeastern Film Critic's Association (SEFCA). He is a film and television critic based in Tampa, Florida. He's also the Senior Editor here at Upcomingdiscs. Gino started reviewing films in the early 1990's as a segment of his local television show Focus. He's an award-winning recording artist for Omega Records. Gino is currently working on his 8th album Merchants & Mercenaries. Gino took over Upcomingdiscs Dec 1, 2008. He works out of a home theater he calls The Reel World. Favorite films: The Godfather, The Godfather Part II, The Body Snatcher (Val Lewton film with Karloff and Lugosi, not the pod people film), Unforgiven, Gladiator, The Lion King, Jaws, Son Of Frankenstein, The Good, The Bad And The Ugly, and Monsters, Inc.
Paulette (Blu-ray) Black Mass (Blu-ray)