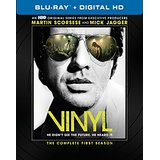 “I started at the bottom working every club in New York City. I mopped floors. Swabbed ashtrays. Hauled kegs. You think you work hard? Try scraping Chubby Checker’s vomit off the inside of a toilet stall.”

Martin Scorsese is a man who has worked very hard over the years. His list of film accomplishments is too big to list here. On television his recent teaming with Terrance Winter produced Boardwalk Empire. It’s not much of a surprise the two would team up again for another HBO series. The unlikely partner in this trio is Rolling Stones front-man Mick Jagger. Together these guys have given us another quality HBO series and another compelling anti-hero.

“By the time it’s the early 60’s I got to start my own record company. Then I built that company into a record label. And then that label ate up other people’s labels. Devoured them. I had a golden ear, a silver tongue, and a pair of brass balls.”

The man with the brass balls is Richie Finestra, played by Bobby Cannavale. Cannavale gave us a terribly frightening character in Gyp Rossetti on Boardwalk Empire. On Vinyl Richie is carried for other reasons. He’s not the kind of gangster Gyp was. He isn’t likely to gut a man just for asking for directions. But he’s just as dangerous if he’s your friend. His self-destructive nature is toxic to anyone around him. Some people need a building to fall on them to get the message. With Richie that’s literally just the beginning.

It’s 1973, and Richie has owned one of the top record labels in the business. American Century has had some of the top acts of the era. It’s an eclectic portfolio that includes Led Zeppelin and Donny Osmond. But the music business is changing, and Richie and his partners are ready to cash out. A German mega-label has made a generous offer that will make all of them millionaires. Everyone is counting on the sale. His partners and his family need the sale to happen, but Richie self-destructs yet again and pulls back at the brink of the deal. Now artists are jumping ship, and no one seems to be able to find the next big thing.

From the title and all of the trailers and buzz you expect Vinyl to be about the 1970’s music business, and there is a grain of truth behind that. But it’s not really about that at all. This is the story of a man spiraling completely out of control and the damage it does to everyone around him. The music business is just the backdrop to it all. Plenty of folks are counting on Richie, and he just can’t get out of his own way.

Of course Bobby Cannavale is at the center of the drama. This is a powerful performance, and he sucks us right into the disaster that is Richie. He has such a tremendous ego that he neglects the input and contributions of others to a point where they feel belittled. He’s so wound tight from booze and cocaine that he is literally riding a tidal wave of sex, drugs, and, of course rock ‘n’ roll. He finds himself at the focus of a murder investigation following a rather interesting character played by an almost unrecognizable Andrew Dice Clay. Richie even turns to mob boss.

There’s quite a lot going on in the supporting cast. Ray Romano is playing completely against type as Richie’s number-one partner. As Zak he’s finally learning that he’s going to go down with the reckless Richie. Richie’s wife Devon is played by Olivia Wilde, who sets no limits to the extent she’ll go in playing Devon. Scorsese has that ability to push performers to a physical and emotional edge. Just ask Robert De Niro. Wilde throws off all of her own conventions to play the vulnerable wife looking to protect her family and find an ounce of independence.

The office is populated by the 1970’s stereotypes. Max Cassela is the yes-man A&R man who is in charge of grooming the artists. His assistant is Jamie Vine, played by Juno Temple. She’s in charge of getting coffee and keeping the staff and artists supplied with various drugs. She wants to be an A&R person and tries to make it happen when she intercepts a tape from Kip Stevens played by Mick Jagger’s son James. Kip has a rough band called The Nasty Bits, and she sees them as her chance to get noticed. Of course dreams are meant to be broken, and we get a great idea of what it might have been like for a woman to try to get ahead in what was a male-dominated game. Through Kip we also see that the dream of getting signed might not be everything he hoped it would be. Compromise and loss of control make a love into a business.

There are also a lot of great artist references from the time. We meet Robert Plant, David Bowie, Alice Cooper, Robert Goulet, and even The King himself, Elvis Presley. Many of these actors are spot-on, and the show does a nice job of blending their performances with the actual music. It’s a particular trip to see Elvis singing Polk Salad Annie while Zak is going crazy about how far The King has fallen. That episode leads to a lengthy sit-down between Richie and Elvis that’s some of the best stuff of the season until it’s interrupted by The Colonel and another dream goes bust. Another emotional moment is the Bowie scenes, which were filmed around the time Bowie died. There’s a nice dedication at the end of the episode.

As you might well imagine, there’s a lot going on here. Richie tries to turn his fortunes around, but every time he is at the doorstep of success he knocks himself and those around him down. There’s a constant theme at play here, but throughout it all Richie is a character you can’t stop watching. He’s as addictive as the white powder he puts up his nose.

The production values shine with extraordinary presence here. I grew up in the 1970’s, and this film has that American Hustle feel that brought me back all of those years. Add the great music, and you get somewhat transported to what might feel like an alien place to the millennials. There’s a style that isn’t always quite authentic and certainly stretches the boundaries of believability more than I might like to see. Still, it’s a blast, and Cannavale is absolutely captivating.

Each episode is presented in its original broadcast aspect ratio of 1.78:1. The 1080p image is arrived at with an AVC MPEG-4 codec. This high-definition image presentation is every bit the period piece that Boardwalk Empire was. You get a grainy 70’s film-like image even though the source is a digital camera. The colors are warm with plenty of soft oranges and browns. Black levels are a little above average, which is pretty much what you have to expect with the grain processing and soft colors.

The DTS-HD Master Audio 5.1 is best during the musical sources. That’s where the dynamic edge of the sound is at its finest. Dialog is also a centerpiece of this show, and it comes through just fine. Surrounds offer just enough ear candy to keep you engaged if not completely immersed in the 1970’s sounds.

Inside The Episode: You’ve seen these kinds of episode-specific features many times. They range 2-5 minutes and give you a brief bit of cast and crew insights.

Making Vinyl – Recreating The 70’s: (18:31) This behind-the-scenes feature is more promotional than informative. There’s a bit about costume and production design, and most of the talk is about the 70’s fashions.

This show fits quite nicely with Boardwalk Empire and The Sopranos. Terrance Winter is the common thread, and this might finally be the new breakout HBO has been hoping for. With Game Of Thrones facing fewer years in front than behind, this is the kind of piece that can keep the energy flowing for a few more years. It might even inspire you to break out the old turntable or even that electric guitar that’s been gathering dust in the closet. “Wanna be in a band?”

Gino Sassani is a member of the Southeastern Film Critic's Association (SEFCA). He is a film and television critic based in Tampa, Florida. He's also the Senior Editor here at Upcomingdiscs. Gino started reviewing films in the early 1990's as a segment of his local television show Focus. He's an award-winning recording artist for Omega Records. Gino is currently working on his 8th album Merchants & Mercenaries. Gino took over Upcomingdiscs Dec 1, 2008. He works out of a home theater he calls The Reel World. Favorite films: The Godfather, The Godfather Part II, The Body Snatcher (Val Lewton film with Karloff and Lugosi, not the pod people film), Unforgiven, Gladiator, The Lion King, Jaws, Son Of Frankenstein, The Good, The Bad And The Ugly, and Monsters, Inc.
Tuesday Round Up: June 7, 2016 Contest: Win The Confirmation on Blu-ray from Lionsgate