All The Way (Blu-ray) 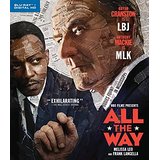 Lyndon Baines Johnson became the 36th President of the United States under the most tumultuous circumstances imaginable. Besides being thrust into office after the shattering assassination of President John F. Kennedy, Johnson had to immediately contend with multiple political crises. Most notably, LBJ faced pressure from several different fronts as he worked to pass what eventually became the Civil Rights Act of 1964. All The Way, buoyed by a funny and ferocious lead performance, offers a thought-provoking and entertaining look at a truly complex figure.

All The Way, which takes its name from LBJ’s 1964 presidential campaign slogan and is based on the Tony-winning play of the same name, opens in the immediate aftermath of JFK’s assassination and the somber swearing in of Lyndon Johnson (Bryan Cranston) as president with wife Lady Bird Johnson (Melissa Leo) by his side. The mood, however, is lightened rather quickly once LBJ begins to settle into the Oval Office and we get a glimpse of the new president’s folksier, more profane side. Robert Schenkkan adapted his own play for the screen, so it’s not surprising to find subtly effective touches, such as the fact that LBJ is being fitted for a suit the first time we see him in the Oval Office. (He’s trying to figure out how to fit into his new role…or how to tailor the presidency to his own strengths.)

“That’s the question, isn’t? What does Lyndon Johnson really want?”

Of course, Johnson is almost immediately peppered with problems. Martin Luther King (Anthony Mackie) is applying pressure on behalf of the Civil Rights Movement for LBJ to pass a substantial Civil Rights Act that, among other things, outlawed discrimination based on race, religion, and sex. Meanwhile, Johnson’s mentor — Georgia Senator Richard Russell (Frank Langella) — represents a contingent of Southern Democrats who threaten to withdraw their support for LBJ’s re-election bid (and perhaps abandon the party altogether) if the civil rights bill passes. And as if LBJ didn’t have enough on his plate, there’s also his desire to declare a War on Poverty and the escalation of the conflict in Vietnam after an incident at the Gulf of Tonkin.

The LBJ of All the Way is a man who wants to “drag the South of the past” and teams up with liberal-minded Senator Hubert H. Humphrey (Bradley Whitford) to help him accomplish his goals and get re-elected. That 11-month countdown to the 1964 election represents an internal clock for Johnson and it results in a series of fractured relationships. (There are also repeated allusions to Johnson’s past — and future — health struggles.) Director Jay Roach (Recount, the great Game Change) has seemingly become HBO’s go-to guy for offering a peek behind the curtain of the country’s political process at the highest level.

The movie also succeeds by painting a multi-layered portrait of its protagonist.More than anything, Johnson is portrayed as someone with a genuine desire to unite people. That inherent passion in LBJ’s character is what prevents Cranston’s portrayal from feeling like it’s over-the-top. The actor — reprising his role from the play’s Broadway run and largely unrecognizable thanks to some transformative makeup — shows us both the bawdy and wily side of Johnson. More than anything, his LBJ comes across as someone who ultimately relishes the responsibility of the presidency, despite acquiring it under tragic circumstances.

It’s tempting to view this movie as the flip side of Selma, which covered a similar time period and featured LBJ as a supporting player to Martin Luther King’s efforts. There are a few moments in All The Way that seem close to putting LBJ and MLK on equal footing, as King performs his own political balancing act with angry, frustrated colleagues he has to appease. But while this is firmly a Lyndon Johnson movie — and already pretty jam-packed at 132 minutes — Mackie (an effective, measured contrast to LBJ’s bombast) was certainly up to the task of playing a civil rights icon. Leo only has one showcase monologue as Lady Bird Johnson, but is generally a doting, crucially supportive force for her husband. Langella goes from trusted adviser to wounded foe for LBJ, but never loses the fatherly affection he has for him.

History is the ultimate spoiler here, so we know that Johnson eventually passes the Civil Rights Act. (Even if the bill’s protections aren’t necessarily enforced at the state and local level in certain Southern states.) So even though we kind of know what’s going to happen at the end — the Vietnam War and the War on Poverty pretty much get the short shrift here, for what it’s worth — All the Way remains compelling by dramatizing the delicate maneuvering politicians have to do to get things done.

All the Way is presented in its original aspect ratio of 1.78:1. The 1080p image is arrived at with an AVC MPEG-4 codec at an average of 37 mbps. Since it’s based on a play, I didn’t go in expecting the most dazzling visual presentation, but this movie still manages to impress. There are understated touches here, like the slightly desaturated palette for the brief JFK assassination flashback that kicks off the movie. The baseline image here features warm tones that help counteract the dark colors (gray/blue/brown suits) that largely populate the screen. Fine detail is phenomenal, which makes it easier to see how well the makeup effects used on Cranston hold up. Overall, this is a rich, surprisingly vibrant presentation of a film that could’ve easily looked staid.

The DTS-HD Master Audio 5.1 track is certainly dialogue-driven, but there are subtly effective bits that help bring the era to life. The gunshots that ring out during the opening titles originate at the front speakers and make their way though the rears. While rear speaker activity is very subdued throughout the movie, the sound field does come to life during the appropriate times. (LBJ’s State of the Union address and during civil rights protests.) Sub activity is virtually nonexistent, but James Newton Howard’s score swells throughout all channels without ever becoming overbearing. Meanwhile, dialogue comes through flawlessly and fidelity is spot-on throughout.

Bryan Cranston Becoming LBJ: (1:55) A very brief Making Of, but there’s some good stuff here. In addition to two-hours in the makeup chair to become LBJ, Cranston also wore 2 ½ inch lifts so that he could tower over people in alternately friendly and threatening ways. Cranston also generously thanks the makeup team for helping craft his performance. Wish this had been longer.

All The Way — A Walk Through History: (10:06) This featurette features input from the cast, Schenkkan and several historians, who offer valuable historical context of this pivotal time period. The 1960s are described as a time when America was struggling against its baser instinct to accomplish loftier goals. Definitely worth a look

All The Way depicts an important, fixed period in time (when the Democratic Party lost its 100-year-old foothold on the Southern states) yet feels timely (no one believes that things are as bad today as they were in the 1960s for minorities, but the current unrest certainly contains echoes of the civil rights movement).

HBO continues to be in the business of cranking out compelling, well-crafted movies that have mostly been squeezed out of multiplexes. All The Way is no exception.