Posted in: Disc Reviews by Gino Sassani on December 1st, 2016 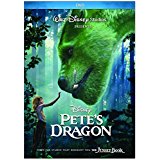 “Sometimes a dragon gets lost…and winds up far from his home.”

It appears to be the intention at Walt Disney Studios that each of its animated classics is to be remade as a live-action film. You can certainly understand the why that might be so. Computer-generated images have passed into the realm of photo-realistic presentations. Today there isn’t anything you can’t bring into the “real” world to interact with actual flesh and blood actors. The concept brought us the brilliant Jon Favreau version of The Jungle Book. Not all of these attempts have been or will be quite so successful. I count Pete’s Dragon among one of those lesser-than films.

The story is quite different from the classic animated feature. The only thing the two really have in common are the characters of Pete and Elliot the dragon. In this story Pete finds himself alone in the deep woods after a car accident takes his parents. He almost immediately encounters the dragon who he names Elliot after the character in his favorite childhood book about a lost puppy.

Jump to six years later, and we see that the two have bonded and made a life together in the woods. They are happy, but that’s all about to come crashing down as a lumber company is invading the woods the duo call home. The company is led by two brothers. Jack (Bentley) is the rational brother who wants to conserve as he cuts trees. His girlfriend Grace (Howard) is also a local park ranger, and the two of them have a young daughter. Jack’s brother and partner is Gavin, played by the new Dr. McCoy, Karl Urban. Once Elliot’s and Pete’s presence is known, Gavin wants to hunt the dragon and profit from its capture. I guess there’s more than a little bit of Carl Denham in the character, but the reference is likely lost on an audience too young to remember the 1933 version of King Kong. Additionally Robert Redford attempts to lend some emotional weight to the material as Grace’s father, Meachum, who has become a bit of a town laughingstock because of his stories of a dragon encounter in his own past. No one really believes him, of course. Redford does deliver a touching character that is really the best face of the film.

Strangely, there isn’t much magical about the CGI dragon. It’s certainly a bit clever. I wasn’t too keen on the idea of Elliot having fur, but after a while it kind of grew on me. But this is actually a substandard CGI creation in almost every other way. The dragon’s green color never appears to catch the natural light of the environments so that he always appears unnaturally placed in almost every scene. I understand the dragon has the ability to blend, but the image does just that even when Elliot isn’t trying to blend in. There’s no real charm in this creature, and that’s a problem when you’re trying to make the kind of emotional connection that existed in the original animated feature. Elliot’s mannerisms almost turn him into a giant dog, and he’s much more canine in the end than dragon. The young actor Oakes Fegley is rather cute and delivered a strong performance as Pete. But he didn’t do near the phenomenal job that Neel Sethi gave us in The Jungle Book. There’s no real heart to this version, and that’s coming from a studio fan who wants every Disney film to be… well… magical.

Pete’s Dragon is presented in its original aspect ratio of 2.39:1. The 1080p image is arrived at with an AVC MPEG-4 codec at an average 35 mbps. The biggest problem with this high-definition image presentation is a serious lack of contrast. The space that separates images here is soft and somewhat blurred. I’ve already mentioned how hard it is to really get a good focus on Elliot. The film appears to have used strong lens filters that deliver a smoky look that takes away a lot of detail and texture. Black levels are necessarily weak, and the film suffers in contrast to the vibrant recent release of the animated film.

The DTS-HD Master Audio 7.1 does not really take advantage of the additional surround space. It’s a dialog-heavy film with little more than grunts and whimpers coming from Elliot. There’s great potential in these deep forest environments to use the ambient sounds as a way to bring you into a world the image fails to do. But this audio presentation is flat and never quite seals the deal.

Notes To Self – A Director’s Diary: (7:31) This behind-the-scenes feature takes a rather clever approach. It’s driven by director David Lowery reading pages of the diary he began when he took the job. Amidst the narration we get cast and crew offering the usual sound bites and a few nice production moments.

Making Magic: (2:11) Pretty much a promo piece with the same narration approach, but this time from cast members.

Disappearing Moments: (9:11) The director leads you through a montage of deleted scenes. This is again a clever and unique way of presenting the scenes.

It’s a bit appropriate that Pete’s Dragon was one of two “gentle giant” fantasy films this past summer. The other was Steven Spielberg’s BFG. You see, this film is more like ET than the original animated film. Of course, the name Elliot makes it easier to make that connection, but that was the name of the dragon in the 1977 film. The comparison and ET-esque nature of the film likely didn’t help. It lost money in the domestic box office and only ended up doubling the $40 million the 1977 film hauled in. Which means when you adjust for inflation the cheaper cartoon performed much better. Maybe not every Disney classic needs to have this kind of rebirth. Soon it’s Winnie The Pooh, and “you have no idea what this thing’s capable of”.

Gino Sassani is a member of the Southeastern Film Critic's Association (SEFCA). He is a film and television critic based in Tampa, Florida. He's also the Senior Editor here at Upcomingdiscs. Gino started reviewing films in the early 1990's as a segment of his local television show Focus. He's an award-winning recording artist for Omega Records. Gino is currently working on his 8th album Merchants & Mercenaries. Gino took over Upcomingdiscs Dec 1, 2008. He works out of a home theater he calls The Reel World. Favorite films: The Godfather, The Godfather Part II, The Body Snatcher (Val Lewton film with Karloff and Lugosi, not the pod people film), Unforgiven, Gladiator, The Lion King, Jaws, Son Of Frankenstein, The Good, The Bad And The Ugly, and Monsters, Inc.
The Hunger Games: Catching Fire (UHD Blu-ray) (4K) The Hunger Games: Mockingjay Part 1(UHD Blu-ray) (4K)