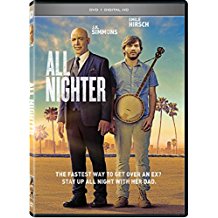 “Dad, this is my boyfriend Martin…”

The tension generated by the first meeting between a young man and the father of the woman he loves has always been a reliable source of conflict. I mean, Ben Stiller and Robert DeNiro managed to squeeze three(!) Focker movies out of that stressful dynamic. All-Nighter fits snugly into that familiar sub-genre while managing to carve out low-key moments of character development and male bonding in between all the noise that comes with this sort of whacky situation.

The movie opens with a young couple named Martin and Ginnie (Emile Hirsch, Analeigh Tipton) arriving at a restaurant to meet Ginnie’s dad Mr. Gallo (J.K. Simmons) for dinner. Martin and Mr. Gallo’s first meeting is a disaster in every conceivable way: the stern, workaholic Mr. Gallo favors three-piece suits and red meat, while Martin is a stammering, sensitive banjo player who hasn’t eaten meat in years. (I’m thinking that J.K. Simmons just has it out for young musicians.) The two part ways with Martin hoping he doesn’t have to see Mr. Gallo very often.

Fast forward six months, and Mr. Gallo unexpectedly shows up on Martin’s doorstep one morning frantically looking for Ginnie. Turns out Martin and Ginnie have broken up during that time. Even though Martin has no idea where his ex-girlfriend is, he still represents the best chance Mr. Gallo has of locating his daughter. As a result, the two embark on a mini-odyssey to find Ginnie…and not get on each other’s last nerve.

All Nighter is less of a goofy romp than it appears to be on paper. (Or at least in trailer form.) Director Gavin Wiesen (The Art of Getting By) and screenwriter Seth W. Owen often struggle with the tone of their movie, which combines elements of Guess Who’s Coming to Dinner and Dude, Where’s My Car? I mean, it’s no wonder that unlikely mash-up resulted in an uneven film.

In addition to the central “Where is Ginnie” question, the story has a built-in mystery that is even more intriguing: what happened that caused Martin and Ginnie to break up in the first place? (And also, why is Mr. Gallo so eager to find her all of a sudden?) The answers aren’t explosive or earth-shattering, and I really appreciate that All Nighter doesn’t turn into a quest for Martin get Ginnie back. Instead, the movie works best as a character piece about two vastly different men figuring out how to meet in the middle. (The secret is…Bob Seger!)

It helps that Simmons (in full Whiplash mode early on, but softening as the story progresses) and Hirsch (taking the next step in his eventual transformation into Jack Black) have very good chemistry on-screen. Unfortunately, there seemed to have been some mandate on set that something zany had to happen when things got too “real” or emotional in the story. That’s how the ripped Simmons ends up in a feminine pink T-shirt that says “Keep It Juicy” for most of the final act. And while I enjoyed Taran Killam and Kristen Schaal’s work early on as fantastically passive aggressive/bickering couple Gary and Roberta, Killam is considerably more irritating when Gary joins Martin and Mr. Gallo on their quest. He’s essentially a drugged-out human whoopee cushion.

All Nighter seems to want to have it both ways, but much of the outlandish humor — Martin also lives with a disruptive, swinger roommate named “Jimothy” (Jon Daly) — ends up sabotaging the parts of the movie that work really well. The filmmakers probably would’ve been better served to lean in one direction or the other; I mean, even Mr. Gallo’s mysterious day job as a “procurer” ends up being infinitely more boring than it sounds. All that being said, I really enjoyed the two leads and the fact that the movie managed to side step many of the odd-couple/rom-com clichés that usually dominate these sorts of films. Check this one out if it pops up on your radar…but don’t feel like you have to spend all night hunting down a copy.