Posted in: Disc Reviews by Brent Lorentson on June 28th, 2017 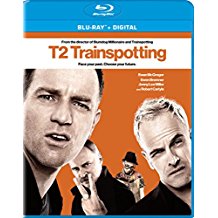 “First, there is an opportunity.  Then…there’s a betrayal.”

It’s been 20 years since the release of Trainspotting, and it’s fair to say a lot has changed in the past two decades.  I remember going out to the United Artists Mission Bell Cinemas to see Trainspotting the weekend it came out.  I was with my best friend at the time, and neither of us was old enough to buy tickets for the film, so we ended up having to sneak into the film.  We’d seen the trailers, and in a time before the internet there just wasn’t much we could find out about it aside from reading articles in the entertainment magazines.  To this day, I remember walking out of the auditorium simply floored by the film.  Everything from the soundtrack to the visuals just hit me, and this was one of the first times I realized what creative influence a director has on the look and feel of a film.  I came out as a fanny of Danny Boyle and the insane kinetic energy he puts into the look of his films.  Over the years Danny Boyle has stepped out of the independent film spotlight and become a big-league director with several other award winning films, i.e. Slumdog Millionaire, 127 Hours, and Steve Jobs.

What a lot of people will also remember is how Trainspotting also kicked off the careers of Ewan McGregor (Star Wars: Episodes 1-3), Robert Carlyle (Once Upon a Time), Jonny Lee Miller (Elementary), Kelly Macdonald (Boardwalk Empire), and Ewen Bremner (Pearl Harbor).  Then there was the soundtrack that helped introduce America to techno music.  This film was simply groundbreaking for its time, and personally I place the first film as one of the top three films to come out in the 90’s.  So what I’m getting at is I was more than a little excited to know a sequel was coming out with everyone returning, but after 20 years, is it possible that too much time has passed?

The film wastes no time catching us up with what our favorite delinquents have been up to for the past twenty years. Renton (McGregor) has been clean for a while now, but we see him collapse while on the treadmill. We later find out he has some health issues he’s dealing with. Spud (Bremner) has been in and out of rehab, still struggling as an addict, but is ready to punch out his ticket in life. Simon “Sick Boy” (Miller) is now extorting people by filming them having sex while stepping out on their spouses.  As for Begbie (Carlyle), it should come as no surprise that he is in prison and is still having anger management issues.

I’m going to go ahead and say this now: if you haven’t seen the first film, SEE IT before watching the sequel.  There are so many nods to the first film and continuations of stories from the first film that if you just go into this film blindly, you will be doing yourself a disservice.

What brings Renton back home is the death of his mother and his need to make things right with his friends.  He has not been in contact with anyone since he walked out on them twenty years ago with the money they were supposed to split; as you could imagine, no one is happy with Renton.

While the first film focused more on addiction and the struggles the characters had with the drugs and the difficulties of getting clean, T2 gives us a look at these characters finally attempting to grow up.  All the characters have kids or are struggling to manage their relationships, but life and consequences of their actions from the past seem to haunt them all to varying degrees.

Renton has grown a lot since we’ve last seen him, and there are some touching moments as he attempts to help Spud get his life back together.  There’s a great conversation where the two are discussing being addicts and how they will never be able to change being addicts, but they can change what they are addicted to.  It’s this moment that seems to connect with Spud, and it’s here where I feel the film seems to change its focus, and Spud becomes the real star of the film.  There’s a great montage with “Dreaming” by Blondie playing where we get to see our characters getting their lives together, and there are moments here where Bremner does so much with the Spud’s character that it just makes this character so endearing.

As for Renton and Simon, this bromance seems so broken at first, but McGregor and Miller have such great chemistry together that it would be hard to imagine that these characters could ever stay mad at one another.  Renton decides to help Simon with building a brothel sauna.  The only thing that can possibly get between these two is Simon’s girlfriend/ business partner Veronika (Anjela Nedyalkova).  I wouldn’t go so far as to call this a love triangle, but she does seem to be the wrench in the machine when it comes to these friends working things out.

But if there is a scene stealer, it is of course Begbie (Carlyle). Oh boy, the years have not helped his anger issues.  For most of the film he has his own story going on as he escapes prison and attempts to build a relationship with his son. Sadly Begbie’s idea of father/son bonding time equals the two of them breaking into a house.  And once he discovers that Renton has finally come back to town…well, he’s bonkers; it shouldn’t surprise you how he reacts.

All this comes together with flashbacks to the first film cleverly woven in.  Danny Boyle returns to form with this film.  He’s one of the true visual filmmakers of our time, and in this film we are hit with an assault of beautiful camera work which personally is an important layer to what made the first film work so well.  From the extreme close-ups to the beautifully-lit bathroom sequence, all the way to Begbie’s meltdown at Simon’s bar.

While the first film handled the friendships the group had, T2 delves deeper and shows a lot of heart in some rather unlikely places and situations.  If you are a fan of the first film, don’t hesitate; go see this film as soon as you can.  For those on the fence or turned off from the drug abuse of the first film, well, I can happily say for the most part the boys are cleaned up; as a whole this is a different film.  This is a film that reminds us that we all have to deal with the consequences of the past and face the skeletons of our past, but most importantly it’s about friendship and how it’s never too late to mend what we thought was broken.

T2 Trainspotting is presented in the aspect ratio 1.85:1.  The 1080p image is arrived at with an AVC MPEG-4 codec at an average of 28 mbps.  Danny Boyle has been ahead of the game when it comes to using digital cameras. Anthony Dod Mantle has some amazing camera work on display, and it is presented beautifully here despite its sometimes sickly look. When you consider how small some of the cameras must be to get certain shots in the film, yet it is still clean and crisp and holds up through all the compression, it is simply impressive.  But it’s some of the low-light cinematography here that is stunning; take a look at the sequence with Begbie chasing after Renton at night. The detail that is captured, the depth is just remarkable. Then the saturated, sickly look of the film blends nicely with times of optimism where bright colors seem to pop, like the scene with Renton taking Spud out for a run.  There are so many different looks, but yet it all blends beautifully and without any compression flaws.

The DTS-HD Master Audio 5.1 track is a loud one. The music really keeps your bass pumping here, which matters because the music is a key figure to the film.  Even with the music taking the lead at times in scenes, we still manage to get clean and clear dialog, even if the accents can be a bit hard to decipher at times. The excellent mix I’ll lend the credit to; this is what I’ve come to expect from a Danny Boyle film. He appreciates the importance of music and sound and its impact on the imagery we see on the screen; top notch mix here.

Audio Commentary with Director Danny Boyle and writer John Hodge:  This is a commentary that is really for the more hardcore fans of the film and the previous film as well.  There is a lot of discussion about the time between the films and the changes that have occurred over the years with plenty of insight into the characters and locations.  It has some slow bits, but for fans, this is definitely a must-listen.

20 Years in the Making: A Conversation with Danny Boyle and the Cast (24:50) As the title says, this is a conversation with the director and members of the cast pretty much discussing why the long gap in time between films and their experiences with the characters then and now.  It’s a fun watch, but I really felt this could have stretched on a bit longer.

Deleted Scenes: There are about 30 minutes worth of deleted scenes. Nothing too remarkable was stripped away, but there is a fun scene with Spud and Renton going into an Apple store and shoplifting, and there is another pair of scenes with Renton interacting with a certain character from the first film. I can see why the scenes were cut, but fans like myself would have no problem seeing these scenes spliced back into the film.

After rewatching the film, I found that my second viewing of the film was a lot more impactful.  I was finding new things and catching other nuances in the performances that simply had me appreciating the film even more. While you may not have to watch the first to follow this film, I highly recommend seeing the first, simply because it’s a brilliant piece of cinema from the 90’s, but it will also enhance the experience of watching this film. As I’ve gotten older, themes in this film about childhood friendships over the years seems to strike a chord with me now. As we near the midpoint of the year, this is definitely a title I rank in the top films I’ve seen this year. This is definitely a must-watch.

Brent Lorentson is a horror writer and film critic based out of Tampa, Florida. With a BA in Digital Film, he co-wrote and co-directed Scavenger Hunt. His short stories have appeared in various horror anthologies. In 2019 his short script Fertile Blood will be a part of the anthology horror film Slumber Party. He is currently working on his first novel A Dark and Secret Place set to be released in late 2019. Favorite Films: Taxi Driver, Fight Club, I Saw the Devil, The Wild Bunch, Dawn of the Dead, A Clockwork Orange, Pulp Fiction, Heathers, The Monster Squad, and High Fidelity.
All Nighter Bones Season 12