Posted in: Disc Reviews by Brent Lorentson on July 19th, 2017 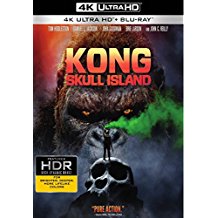 Every year it seems the “summer” movie season seems to start sooner than the year before.  Here we are, the second Friday of March, and already we’ve seen the huge box office weekend for Logan, and now this weekend we have the release of Kong: Skull Island.  Ever since Kong first graced the big screen back in 1933, every film that followed was a mega-event. Personally it wasn’t till 2005 that theatergoers got to fully experience the massive beast in all his glory as he became worthy of the title “the 8th wonder of the world”.  Now we have Legendary Entertainment playing in the giant monster movie sandbox with plans to set up a series of monster films.  All this leads up to the inevitable clash of the kaiju monsters where we will finally see the showdown of Godzilla vs. King Kong.  Before we begin to get too excited, how does our current trip to Skull Island fare?

It doesn’t take long for us to get to Skull Island; in fact, the film opens up on the shore of the island in 1944.  Two soldiers are shot down and crash on the island, and their fight to the death continues as they pursue one another into the heart of the island.  Their fight is quickly interrupted by none other than Kong, and the pair realizes they seriously have bigger things to worry about on the island.  OK, I’m fine with not drawing out the reveal of Kong, but really, the first five minutes?  Where’s the tension to build to his massive 300-ft-plus reveal?  Sure, we’ve all seen the trailers for about a year now, so seeing Kong should be no surprise, but come on; he deserves at least some kind of a buildup.

The film jumps ahead to 1973 as the Vietnam War is coming to a close. Bill Randa (John Goodman) plays a member of MONARCH who wants to have a government-funded survey of a secret island. His plan is to beat the Russians to the discovery, but we know he’s up to something.  For those who may not remember from Godzilla just a couple years ago, MONARCH is an agency that investigates giant monsters and attempts to monitor them in secret from the rest of the world.  Randa is given his military escort and his funding to check out the island, which leads to the building of the rest of his team.

No time is wasted as we see Samuel L. Jackson hired on to lead the military escort with his merry band of misfit soldiers.  Packard (Jackson) isn’t happy about the war ending, especially with it looking as though America is on the losing side of things, so right off the bat we know he has something to prove.  We jump to James Conrad (Tom Hiddleson) being hired on as an expert tracker with British military service under his belt.  The writers using the name Conrad is no doubt a wink and a nod to Joseph Conrad, who wrote the novel Heart of Darkness, which the film Apocalypse Now was based on. What does that tidbit have to do with anything?  Well, this is pretty much more a monster movie remake of the famous Vietnam War classic than it is a Kong movie.  The last of the recruitments for the “survey” team is Mason Weaver (Brie Larson), who is an acclaimed war photographer who has signed on for this because she suspects there is more to this mission than anyone is letting on.

With the team assembled, again no time is wasted before we climb aboard a ship and they depart for the island.  I’m all for moving things along, but part of what I felt Godzilla had going for it was the relationships that were built in the first act of the film as we were given a little bit of heart.  This time around the film has no time to take a breath and let us get to know the characters as anything more than monster food fodder, which even goes against what we got out of Apocalypse Now, the film it is desperately attempting to imitate.  We get the helicopter invasion on the island, we get the rock music blaring as they move in for their attack, but Kong is not too pleased with his unexpected guests, and he swats the helicopters down with ease.  OK, so when we see Kong, it’s almost impossible for me not to get a little excited seeing him do his thing, destroying things and eating people; seeing him on the rampage on his home turf is what I wanted out of this movie.  But this is all very short-lived.

Don’t get me wrong; the visual effects are amazing, the cinematography is beautiful, but the story is about as flimsy as it comes with virtually transparent characters.  It doesn’t take much to figure out where this film is heading, and that is frustrating considering the time put into this film as well as the talent.

When the survey team discovers the natives on the island, we are reintroduced to the American soldier who crashed earlier in the film, who is now played by John C. Reilly.  For me, Reilly was one of the better things about the film, where generally the rest of the cast seemed to just show up for the role and collect a check.  Granted most of this cast has more talent on their worst day than most actors who are out there, but it’s evident that not everyone here is showing up to deliver their best performance.

There are a lot of CGI monsters that are on display for us to marvel at; our introduction to the “Skull Crawlers” is a pretty awesome one as we see our team of surveyors travelling through a bone graveyard of Kong’s ancestors.  It leads to a fun fight, but really all I wanted was to see more Kong, and that comes in a way too limited supply here. Many of these fights and monster sequences felt stale and rehashed in my opinion, and where the blame falls with this is on the director, Jordan Vogt-Roberts, who previously only had one other feature film credit.  I understand with Godzilla it worked hiring a smaller- budget filmmaker to helm the film, but he was a guy who loved giant monster films.  When it comes to Kong: Skull Island, the same love and passion for the genre just doesn’t come through.

Kong: Skull Island  is presented in its original aspect ratio of 2.40:1. The Ultra-high-definition  image is arrived at by an HEVC codec with an average bitrate of 70 mbps. This ultra-high-definition image presentation owes a debt to its solid black levels and shadow definition. We see the darkly-colored Kong against backgrounds that are not exactly well-lit. But you can really see the form as well as the nice texture the animators rendered to the monster’s hide. Many of the large animals here are camouflaged, so the 4K disc delivers that wonderful sharpness and depth that you can make them out quite well. The computer-generated images blend seamlessly with the live-action shots. The locations offer some quite spectacular vistas that shine in this presentation. There is a misty element to the image that’s part of the intended style that does take away some of the clarity and detail. The film is also colored as a 70’s period piece, so there is some under-saturation in the colors.

The Dolby Atmos presentation defaults to a 7.1 track. This is an immersive and aggressive surround mix. There are some great creaks and groans calling out from the jungles. You are surrounded by roars of creatures and flying ammo. The helicopter encounter with Kong is one of the better sound presentations you’ll get. You are completely pulled into the action. Dialog is clear and well-placed. Subs help to make Kong’s roar a room-shaking experience. From explosions to chopper blades, the subs deliver excellent low-end pleasure.

Creating A King: There are two parts here with no play-all. Both deal with the cinematic history of the Kong character. Cast and crew offer their own thoughts on the film icon and their new take on the material. They often talk about making Kong so much bigger to have a god-like impact. Not true. He’s bigger so he can tackle Godzilla down the road. Had to call BS there, guys.

On Location – Vietnam: (5:38) Vietnam has rarely been shot and this feature explores the cast and crew as they experience the country.

Tom Hiddleson – Intrepid Explorer: (6:38) A profile on the actor as we follow him around the globe to the film’s three locations (Australia, Vietnam and Hawaii).

Through The Lens – Brie Larson’s Photography: (2:18)  A look at the photographs the actress took. Her character’s camera was reel and always loaded with film.

Monarch Files 2.0: (7:58) These are “classified” Monarch “documentaries” of Skull Island.

Deleted Scenes: (3:45) There are four with no individual selection.

I love seeing giant monsters on the screen battle it out, and what Legendary Pictures has planned still has me very excited, but a little more cautious now.  They came out of the gate strong in my opinion with Godzilla. I know not everyone agrees, but I love just about every frame of that film. Kong: Skull Island, came to the table with strong trailers and a great cast, but it just doesn’t measure up.  People may complain about the pacing of Godzilla, but there was at least an emotional connection forged with the characters, where this time around it simply felt like a safe, on-the-rails theme park ride.  Sure, there is popcorn fun, but nothing that leaves a mark as this classic cinematic character deserves.

Brent Lorentson is a horror writer and film critic based out of Tampa, Florida. With a BA in Digital Film, he co-wrote and co-directed Scavenger Hunt. His short stories have appeared in various horror anthologies. In 2019 his short script Fertile Blood will be a part of the anthology horror film Slumber Party. He is currently working on his first novel A Dark and Secret Place set to be released in late 2019. Favorite Films: Taxi Driver, Fight Club, I Saw the Devil, The Wild Bunch, Dawn of the Dead, A Clockwork Orange, Pulp Fiction, Heathers, The Monster Squad, and High Fidelity.
Game Changers Alive and Kicking