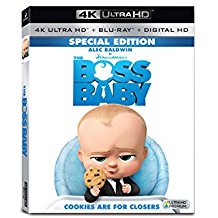 “Survival of the fittest. It’s the law of the jungle. There’s always someone trying to take what’s yours. How do I know? It almost happened to me.”

Where the heck has Alec Baldwin been lately? I seem to recall he was a pretty hot A-list movie star actor at one time. There was The Hunt For Red October, and then there was… OK, forget the A-list movie star bit. He was really an A-list television star. He killed it in 30 Rock and then of course there was… OK. Re-set. Now I remember. There was that hugely popular radio talk show he had going on for, what was it, five minutes? Hey, at least he’s having fun spoofing Donald Trump on Saturday Night Live. Easy gig, all he really has to do is pretend to be Alec Baldwin. Just when I honestly had completely forgotten the guy, he shows up as the voice for an obnoxious baby on Boss Baby. Who said typecasting was dead?

It appears there is just so much love in the world, and it’s a bitter competition to get a good share of that love. There are two companies playing tug-of-war with the world’s love supply. On one side there is Baby Corp. That’s where babies come from, and they’ve been cranking them out as fast as they can. Some of the babies who show a special toughness get selected to drink a magical formula that keeps them babies forever. These chosen few are the executives who run Baby Corp. They are now also being used to infiltrate the families of their fierce competition in the love department, PuppyCo. Their leader, Francis Francis (Buscemi), has a plan to unleash a new secret weapon that will shift the balance of love from babies to puppies. It’s the Forever Puppy.

The leader of the infiltration team from Baby Corp is Boss Baby (Baldwin). He ends up being the unwanted brother to Tim (Bakshi), who is used to having all of his parents’ love. So that competition for love exists on the micro-level in homes like Tim’s. When Tim discovers that Boss Baby can talk and has a team of other talking babies, he hopes he can get all his love back by exposing the plot. Of course, when Tim discovers that Boss Baby will leave if his mission is accomplished, he decides to help with the plot, and the expected and inevitable bonding starts to happen. It’s all narrated by the older Tim, voiced by Tim McGuire, who has a daughter about to go through the same kind of experience.

The material had to be fleshed out a bit here. It’s all based on a very short children’s book by Marla Frazee. Of course most of the intrigue was added to what was really a look at a toddler’s learning of vocabulary. Not the most captivating of movie subjects. So there is a lot of stuff thrown in, most of it pretty standard stuff for animated kids’ films. You see the jealous new arrival in many of these stories going back to Toy Story and The Secret Lives Of Pets among many others. It’s always the same idea. The two are thrown into an adventure where they learn to like each other. Likely, that’s the way it is with real siblings. One tends to be somewhat hostile toward our brothers and sisters until an outside force threatens them. There’s a lot of that here.

The problem here is that it’s hard to keep the attention, at least of the adults. There’s too much spoken exposition that might work for an older crowd but will make the little ones a bit restless. The film sprinkles in the cute factor, but for some strange reason all of that is more reserved than I would have expected. You’ve got puppies as a big story point here, but they are used sparingly. The film mostly has to depend on the interactions of Tim and Boss Baby, but that wears quite thin at times. The film also pushes the bad-guy scenario a lot but neglects to really make it scary. I doubt that the kids understand the pie chart concepts, so it flies a bit over their heads. I respect the idea of trying to trade potty humor for something a bit cerebral, but I’m not sure they hit the mark at all here. There is a very clever bit of exposition produced from Francis’s pop-up book that is rather cool visually and one of the better exposition reveals. All the kids will remember are a few one-liners like “Cookies are for closers” and a few of the requisite pratfalls. There’s a really nice message here, if you find it.

Boss Baby is presented in its original aspect ratio of 2.35:1. The ultra-high-definition  image is arrived at by an HEVC codec with a very disappointing average bit rate of 30 mbps. This is a very good high-definition image presentation. Unfortunately this is an ultra-high-definition disc. The bit rate and quality are nothing better than you’ll find on the Blu-ray copy. I suspect there are going to be times that the studios are going to try to pass off nearly identical transfers with nearly identical compression off as a UHD disc. This is one of those times. Yes, it’s a relatively sharp image with nice color reproduction. But this isn’t the vivid pop that we should see on a good HDR presentation. There is nothing of the depth that UHD discs provide on a routine basis. Either this was a mistake or a lazy attempt to get two formats from one cut.

The Dolby Atmos presentation defaults to a standard 7.1 track. This is a rather inconsistent audio presentation. I hate when I have to ride my remote control to get the best out of the audio. You will need to do that here. There isn’t much power in the presentation, and sub levels are particularly flat. You really have to crank it to get the most out of any action scenes. The dialog is mostly clear, and that’s really all that is serviced here. There are some good surround moments that almost immerse you into this stylized world, but not enough, and you might have to turn it up too much to appreciate any of it.

The extras are all very brief promo items and require a lot of pushing buttons for a couple of minutes of material.

Baby Corp And You: (3:03) A mock employee orientation video.

The Forever Puppy Infomercial: (2:09) Exactly what it says.

Babies Or Puppies – Who Do You Love?: (3:26) It’s a mock survey to decide who is loved more: Babies or Puppies.

The Boss Baby And Tim’s Treasure Hunt Through Time: (3:35) This is a compilation of the fantasy scenarios Tim plays out in the film.

Cookies Are For Closers – Inside Baby Corp: (3:37) This is pretty much a trailer.

The Great Sibling Competition: (3:27)  Cast and crew talk about their own sibling relationships in this look at the film’s sibling dynamic.

Happy Accidents: (11:30) These are the deleted scenes. There is no individual selection, and there is an overall intro and scene intros by the filmmakers.

The film actually appears targeted more to the adults but lacks the cleverness to pull that off and still retain the attention of the kids in the audience. That’s a hard balancing act to pull off. Pixar does it well. The Simpsons has been doing it for decades. This is more your standard stuff. “You know, goo goo gaga, the whole bit.”

Gino Sassani is a member of the Southeastern Film Critic's Association (SEFCA). He is a film and television critic based in Tampa, Florida. He's also the Senior Editor here at Upcomingdiscs. Gino started reviewing films in the early 1990's as a segment of his local television show Focus. He's an award-winning recording artist for Omega Records. Gino is currently working on his 8th album Merchants & Mercenaries. Gino took over Upcomingdiscs Dec 1, 2008. He works out of a home theater he calls The Reel World. Favorite films: The Godfather, The Godfather Part II, The Body Snatcher (Val Lewton film with Karloff and Lugosi, not the pod people film), Unforgiven, Gladiator, The Lion King, Jaws, Son Of Frankenstein, The Good, The Bad And The Ugly, and Monsters, Inc.
Ghost in the Shell (UHD Blu-ray) (4K) Gifted (Blu-ray)