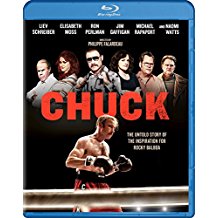 Unless you’re a hardcore boxing fan (or a Jersey boy/girl), chances are you don’t know the name Chuck Wepner. On the other hand, you don’t have to be a sports buff or a movie buff to know the name Rocky Balboa. Wepner is a former heavyweight boxer, and his 1975 title bout with Muhammad Ali served as the inspiration for Sylvester Stallone’s Oscar-winning classic. Originally titled The Bleeder (my two cents…they should’ve stuck with that title), Chuck is the story of “The Real Rocky.”

“That guy could take a punch.”

Liev Schreiber — who also serves as a producer on this film — stars as Wepner, who was known as “The Bayonne Bleeder” due to his Jersey hometown along with his toughness and ungraceful willingness to get hit and keep moving forward. Still, Chuck is more interested in the emotional beatings Wepner took throughout the course of his life…and the ones he doled out to the people closest to him, including no-nonsense second wife Phyllis (Elisabeth Moss).

The film introduces us to Chuck by showing us the sideshow he eventually became — squaring off against a bear in a boxing ring — before flashing back to the events that led to the fight against Ali (Pooch Hall). Even though Wepner was a Top 10-ranked heavyweight, he was forced to take on jobs as a liquor salesman and debt collector to make ends meet. When his manager/cutman Al Braverman (Ron Perlman) informs Chuck that he’s in line for a title shot, Wepner is determined to overcome the overwhelming 40-1 odds against The Greatest and accomplish something he could be proud of.

And this is where the script by Jeff Feuerzeig and Jerry Stahl does something very clever, in my opinion. Instead of making Wepner’s fight with Ali the climax of the film, Chuck’s big title shot comes at about the movie’s 30-minute mark. This is smart when you consider that both real life and Rocky serve as spoilers for what happens in the fight (although Stallone’s movie had more of a Hollywood ending).

The rest of the film is dedicated to Wepner’s familiar spiral — drugs, women, botching an audition for Rocky 2 (ok, maybe that last one is unique to Chuck) — followed by his redemption. I realize that sort of arc isn’t exactly breaking the storytelling mold, but director Philippe Falardeau and his talented ensemble cast do more than enough to liven up the proceedings. Falardeau and cinematographer Nicolas Bolduc do a tremendous job of matching the visual style of Chuck to its time period. (More in the Video section of the review.) On top of that, the script by Feuerzeig and Stahl feature enough relatable touches — like the fact that even a Top 10 heavyweight couldn’t make boxing his full-time job — to break out of the usual biopic doldrums.

Chuck, a movie about a boxer, also leans into the storied tradition of movies and boxing. After his title bout with Ali, Wepner begins living vicariously through the success of Rocky since he didn’t reap any financial rewards and connects with Stallone (Morgan Spector, a more effective doppelganger for Sly than Hall is for Ali). Wepner’s favorite movie is 1962’s Requiem for a Heavyweight, which starred Anthony Quinn and centered around a fictitious boxer whose career is derailed after losing a fight to…Cassius Clay! (aka, the future Muhammad Ali) It’s an effectively meta touch that nods at the long line of films about the sweet science.

Schreiber — equal parts burly and charismatic — is great as Wepner, a role the actor had been angling to play for at least five years. I just wish the movie hadn’t felt the need to include quite so much of the intrusive voiceover narration we get here, even though Schreiber delivers it with flair. The rest of the cast is equally good. Perlman is a profane delight as Al “The Butcher,” so it’s a shame when he vanishes for the latter half of the film. Comedian Jim Gaffigan is low-key creepy as (too) loyal friend John Stoehr, while Michael Rapaport delivers solid work in a pair of scenes as Chuck’s estranged and fed-up brother. Moss (as usual) is a marvel as Phyll, who takes the biggest emotional beating out of anyone due to Chuck’s wandering eye and general irresponsibility. I also enjoyed Naomi Watt’s total commitment to her Jersey Girl bartender; the fact that she looks like she’s playing dress-up is offset by her strong chemistry with real-life partner Schreiber.

Chuck is 98 minutes long but spans more than a decade, so there’s definitely plenty of material that got skipped over. The film ends with a short and sweet check-in on the real-life Wepner that probably would’ve felt too cheesy by half in less capable hands. But this biopic does enough of a good job mixing real life and fiction — the sublime and the ridiculous — to make it work. After all, “sometimes life really is like a movie…sometimes it’s better.”

Chuck is presented in an aspect ratio of 1.85:1. The 1080p image is arrived at with an AVC MPEG-4 codec at an average of 35 mbps. The movie occasionally switches to a boxier full screen aspect ratio whenever it presents real-life footage (or recreations) of press conferences and training sessions leading up to the big fight. Chuck‘s greatest visual achievement, however, is the way it mimics the style of low-budget movies from the 1970s. As a result, there is some (intentionally) heavy grain throughout, but particularly during Wepner’s match with Ali. The image here also has a grimy, yellowish tint throughout, which effectively immerses us in Wepner’s increasingly seedy world.

The DTS-HD Master Audio 5.1 track also leans into the film’s ’70s setting, though not nearly as much as the visual presentation. Tracks like Bachman Turner Overdrive’s “You Ain’t Seen Nothing Yet” along with various disco tunes fill the surround sound field and represent the track’s most powerful bursts. We do get some subtle bottom end support during the Ali/Wepner fight; many of the punches land with a thud that is punctuated by some sub activity. Otherwise, this is a dialogue-driven biographical drama that is well-balanced and probably a step or two more dynamic than it needed to be.

All About Chuck: (3:28) Star/producer Liev Schreiber offers some input into the making of Chuck while clips from the film are interspersed throughout this too-brief featurette. Schreiber talks about spending time with Wepner, shooting scenes with real-life partner Naomi Watts, and taking 858 punches to the face from co-star Pooch Hall while filming the Ali fight. It’s really a shame that this is the only special feature, because there are clearly lots of stories to tell here. Presented in HD.

“For me, it was always about putting on a show.”

In less than a week, the boxing match between undefeated Floyd Mayweather and mixed martial artist Conor McGregor will likely become the highest-grossing pay-per-view event of all time. So more than 40 years after Wepner got a racially-charged (and purpotedly farcical) title shot against Ali, the sideshow is alive and well!

Although Chuck hits some of the familiar biopic beats, there’s enough heart (just like Wepner) and sneaky style (not like Wepner at all) to make this stand out from the pack.

The Hitman’s Bodyguard Congratulations to Brent Lorentson on 500 reviews