Posted in: Disc Reviews by Gino Sassani on September 19th, 2017 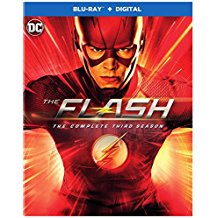 “I made a big mistake…. I wanted a new life. I wanted to start over, and that’s what I did. But somehow I made things worse. So I reset everything. I put everything back to the way that it was before, except some things weren’t the same any more. Not even a little bit.”

That something is called Flashpoint. It’s one of the biggest events not only in the Flash comic universe, but it had ramifications across the DC landscape and led to more than a few changes in that world. This season of The Flash uses that story arc to guide Season 3, but like everything else in these comic shows, it is quite different than the printed event. That’s going to either excite fans or make some of them a little angry. If you can treat the series as its own thing, you’re in for a high-speed adventure with the release of The Flash The Complete Third Season from Warner Brothers. But you had best be caught up. This speedster doesn’t slow down for anyone, and if you hope to tag along, you should look into the first two seasons. Of course, we’re happy to help with our reviews of both seasons that you can catch Here.

Many superheroes are defined by some pivotal moment from their past. I’m not talking about whatever gave them their powers. It’s the thing that drives how they use those powers. For Barry Allan as The Flash, it was witnessing his mother get killed by a speedster and having his father falsely accused and convicted for the crime. When Barry gets his powers it was pretty much a no-brainer that the first season would deal with him confronting the man who caused all of this pain in his life. By the end of the second season Barry knows how to use his speed to travel in time, and the one event he would like to change is that tragic moment. That’s exactly what he does, which creates a new timeline, and that’s where we find Barry as the third season begins. He calls the new timeline Flashpoint. He’s happily living with both parents and all seems right with the world…or is it?

His relationships with other people has changed, and not for the better. There is another Flash fighting crime and he has his own speedster villain who calls himself The Rival. Things appear to be going off the rails, and he discovers that the “right” thing to do would be to return the original timeline. It’s a sacrifice that Barry is eventually willing to make. They say you can’t go home, and that’s exactly what Barry discovers. Even while trying to set things right, there are now unexplained differences. The most dramatic is that a new villain has emerged who calls himself Alchemy, and he’s rooting out people who had powers in Flashpoint and giving the powers to them and turning them loose on Central City. You can pretty much guess that we get several episodes out of these new bad guys.

There are some character changes here as well. When Barry returns to the quasi-original timeline, he suddenly has a coworker in the lab. Harry Potter’s Tom Felton joins yet another franchise represented by a lightning bolt when he plays the rather complicated CSI Julian Albert. You will also find quite a few Harry Potter-related Easter eggs with his character throughout the season. Another big addition to the recurring cast is an Earth 19 bounty hunter named Gypsy and played by Jessica Comacho. She can make portals like Cisco, and it’s her job to capture Earth 19 residents who attempt to travel to other dimensions, as it is illegal on Earth 19. You’ll find big changes in the established cast and their characters. The big news is Wally West (Lonsdale) getting to go full Kid Flash. Caitlin (Panabaker) fights the entire season with her Killer Frost potential, and we get to see more than a little of Killer Frost. The biggest disappointment is the introduction of a new Wells character. This Harry Wells is from Earth 19 and is a rather lame character all around. Tom Cavanagh continues to be one of my favorite performers on the show, right up there with the incredibly talented Jesse L. Martin. But this version is more of an annoyance, and it’s actually by design. Earth 2’s Wells’ daughter is now the comic speedster Jesse Quick.

The season sees the return and introduction of some cool members of The Flash rogue’s gallery. Grodd is back with an entire gorilla army to get his revenge for being sent to another Earth. I love Grodd, and they have done great things with his CGI, but this season they got too ambitious, and the gorilla army isn’t very impressive on television CG budget restraints. Mark Hamill returns this time as the 1990’s show version of Trickster as we visit The Flash in his Jay Garrick version staring the earlier show’s flash John Wesley Shipp. Ashley Rickards stars as a female version of The Top, Grey Damon gives a great performance as Mirror Master, Wentworth Miller has a couple of episodes back as Captain Cold, but this time as a kind of good guy. Joey King plays a villain who can move metal like Marvel’s Magneto and is named coincidentally enough Magenta. But the biggest bad of the season is yet another bad speedster with a metal suit named Savitar, who is voiced by Tobin Bell. Of course, there are big reveals for both Alchemy and Savitar that I wouldn’t dream of revealing here.

There is a big crossover event with all four CW DC shows. However, you do not get the other episodes here. The musical episode Duet is kind of a crossover in that it stars actors from the three other shows. Barry and Kara (Benoist) are put in a coma where their minds are trapped in something akin to an old MGM musical. They find themselves helping their own love interests get with each other even though they are from two different mob families. Victor Garber, Jesse L. Martin, and John Barrowman star as these mob guys. It’s highlighted by the sugary original song Super Friends, while most of the songs are covers.

Villain School – The Flash Rogues: (7:42) A look at the new bad guys this season and a refresher on those who had already been introduced.

Allied – The Invasion Complex: (9:48) A look at the crossover episode but the other episodes were not included.

The Flash- Hitting The Fast Note: (4:08) A look at the musical episode.

Harmony In A Flash: (15:34) Blake Neely designs and arranged the musical score for Duet.

Synchronicity In A Flash: (20:59) Even more on the musical episode. There is redundant material here.

A Flash In Time – Time Travel In The Flash Universe: (21:47) This is somewhat a documentary on time travel. There is tie-in to The Flash, but most of it is theoretical stuff.

The season spends a lot of time dealing with the Speed Force and its own version of morality. I think so much mythology tends to slow the season down and stick it a bit in the mud. I still love the show, and I still consider it the best superhero television show currently on the air. But this has been my least favorite season. The season ends with some hope that the team will return to normal with the better Wells involved, and I have high hopes it will return a little more to the fun of the first two seasons. This was a bit of a dark season with few exceptions. The season could have done without something, to be sure. “That something is called Flashpoint.”

Gino Sassani is a member of the Southeastern Film Critic's Association (SEFCA). He is a film and television critic based in Tampa, Florida. He's also the Senior Editor here at Upcomingdiscs. Gino started reviewing films in the early 1990's as a segment of his local television show Focus. He's an award-winning recording artist for Omega Records. Gino is currently working on his 8th album Merchants & Mercenaries. Gino took over Upcomingdiscs Dec 1, 2008. He works out of a home theater he calls The Reel World. Favorite films: The Godfather, The Godfather Part II, The Body Snatcher (Val Lewton film with Karloff and Lugosi, not the pod people film), Unforgiven, Gladiator, The Lion King, Jaws, Son Of Frankenstein, The Good, The Bad And The Ugly, and Monsters, Inc.
The Mummy (2017) (Blu-ray) Wonder Woman (Blu-ray 3D)