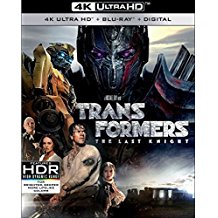 “These movies that I’ve done, they are massive movies. They take a lot out of you.”

That’s director Michael Bay talking about his decade-long work on the Transformers franchise on the eve of the fifth(!) film’s arrival. The movie also doubles as Bay’s swan song in the director’s chair, so when he says, “They take a lot out of you,” the filmmaker is presumably talking about the massive amount of energy and manpower (and horsepower) these big-budget bonanzas require. The problem is “They take a lot out of you” has also applied more and more to each subsequent movie in this series. Transfomers: The Last Knight isn’t just a bad movie…it is painful and exhausting to watch.

“This is where it gets intense.”

It was precisely 10 summers ago that Bay’s first Transformers movie exploded into theaters. The original film’s “boy and his car” plotline and the relatively straightforward conflict between the Autobots and Decepticons — led by Optimus Prime (voice of Peter Cullen) and Megatron (Frank Welker), respectively — make it seem positively quaint compared to the loud, bloated disaster that is The Last Knight. (Although the new film briefly tosses a bone to anyone who’s missed former franchise star Shia LaBeouf…Bueller?)

The Last Knight opens with a prologue set in the Dark Ages and featuring the legendary wizard Merlin (Stanley Tucci), who strikes a deal with a robotic Knight from Cybertron to help King Arthur achieve victory using a staff of incalculable power. I realize this bit of revisionist history may sound silly (because it is), but the last couple of films have established that Transformers also played a role in the moon landing (Dark Side of the Moon) and were present on Earth in prehistoric times (Age of Extinction). This film posits that the staff bequeathed to Merlin is the reason the various Transformer factions keep returning to Earth to settle their differences. (So much for the All-Spark, “Transformium,” or any of the other Macguffins in this series.)

In the present day, humans are weary of Transformers tearing up the planet’s major cities and have established the Transformers Reaction Force (TRF). Cade Yeager (Mark Wahlberg), the roughneck inventor hero of the previous film, is living as a fugitive alongside a group of surviving Autobots, who are still missing their leader. Shortly after rescuing a street-smart teenager named Izabella (Isabela Moner), Yeager is given a metallic talisman by a dying Cybertronian Knight who crashed on Earth.

“Oh, what we would all give to have Prime back right now.”

Speaking of crash landings, Optimus Prime arrives on the ruins of his home planet Cybertron, where he is looking to (literally) meet his maker. He encounters the godlike Quintessa (Gemma Chan), who brainwashes Prime and instructs him to destroy Earth so that Cybertron can live again. To accomplish that, Prime has to get his hands on the staff. However, a mysterious English gentleman named Sir Edmund Burton (Anthony Hopkins…yes, that Anthony Hopkins!) is also on the hunt for the staff, and he enlists the help of Yeager and an impossibly Fox-y Oxford professor named Viviane Wembley (Laura Haddock, a doppelganger for original Transformers hottie Megan Fox…but with an English accent!)

“I was making the moment more epic.”

Believe it or not, I could actually go on and on describing this movie’s scattered, overly-involved plot. (Whoever would’ve guessed an “overly-involved plot” would be an issue in a Transformers flick?!) These films have consistently clocked in around the 150-minute mark, but I do get the impression Bay felt compelled to jam everything he could into The Last Knight since this is his last Transformers movie as director. (And the first since it was announced that Transformers was getting its own movie universe.) That might help explain the pretty-much-inconsequential return of characters like Josh Duhamel’s William Lennox (now a reluctant member of the TRF), Megatron (who I’m pretty sure got his spine torn out of his body about two movies ago), and John Turturro’s crackpot Agent Simmons. Turturro quite literally phones in his performance here…and couldn’t even be bothered to put on pants to be in this movie.

Look, I’m no Michael Bay-hater. I’ve actually really enjoyed his non-Transformers output in recent years. The problem is that his absolute worst instincts seem to take over when he’s not working with a relatively limited budget (Pain & Gain) or having to adhere to real-life history (13 Hours). The man can absolutely film the hell out of speeding cars and blow things up like no other, but every action sequence here is a bloated mess. One place the Transformers franchise has improved over time is by giving us Autobots and Deceptions who are more distinctive from one another; it used to be that every battle was a tangled mess of twisted metal. Unfortunately, Bay’s way of giving the robots “personality” is by making a bunch of them jive-talking clowns. Despite a bunch of new additions in this film, the only new robot that really stands out is Cogman, Sir Edmund’s sociopathic butler (voiced by Downton Abbey’s Jim Carter, in a canny bit of casting.)

Sadly, the humans don’t fare any better. Practically every character on screen is either a motor-mouthed nincompoop or a self-serious meathead. (Wahlberg is the only one who gets to sorta be both.) The “humor” in this movie — Bay feels compelled to shoehorn “jokes” into every single scene — is especially cringe-worthy and repeatedly undercuts the film’s grand-scale plot. Also, it just makes everyone look terrible. For example, I’ve heard really good things about The Carmichael Show…but after watching star Jerrod Carmichael bumble and screech his way through this movie as a whiny ally of Yeager’s, I don’t want to have anything to do with the comic for a while.

A movie that employs the likes of Hopkins, Tucci, Turturro, John Goodman, Steve Buscemi, Ken Watanabe, Tony Hale, etc. is something that everyone should want to see. Unfortunately, they are all completely wasted here. The movie also blows various chances at intriguing storylines — Bumblebee’s emergence as the new Autobot leader, Optimus Prime’s extended run as a bad guy, Yeager acting as a surrogate father to Izabella — because it tries to have everything at once and accomplishes very little other than giving the audience a headache. (The headache won’t come because of the explosions, which are awesome…it’ll hit you from rolling your eyes so often.)

Transformers: The Last Knight  is presented in its original aspect ratios of 2.39:1. and 1.90:1 The ultra-high-definition 2160p  image is arrived at by an HEVC codec with an average bitrate of 85 mbps. Whatever you might be able to say about the film itself, there’s a lot of movie magic in the visuals, and the UHD format was certainly made for this kind of presentation. Even though the source here is really a 2K upconverted to 4K, it is quite a bit superior to the HD 1080P presentation. While not always bright, the colors are indeed vibrant. The bots sport nice subtle color flourishes that are honestly lost even in a big screen presentation. Now with the help of this HDR presentation, you get to see those small colorful flourishes. Of course, the cars are hot. The yellow Bumblebee car truly stands out from its environments with a super intense and shiny splash of color. You get a little more texture here, something almost totally lacking in the Blu-ray. Close-ups benefit the most by the sharp image. Honestly there are often so many manic things going on that long shots don’t always benefit so much. The green fields of London stand out in an otherwise dark and gritty image. Black levels are nice, and you can enjoy solid shadow definition so long as the backgrounds aren’t so busy. The London locations also stand out with the wonderful castles. The aspect ratio changes to accommodate what was shot in native IMAX.

The Dolby Atmos presentation defaults to a manic 7.1 track. There’s a ton of stuff going on, and the surrounds will whistle and whiz content all around your room. The extra speakers are a blessing here, and you are truly immersed into some heavy action. The subs are often non-stop, and this is not a film you should even attempt to watch quietly. There is almost always something flying around. You get the expected sounds of the bots and all of the gyrations and clashes they tend to make. The score often fills the room acting as a carrier wave for the rest of the audio presentation. With all of this activity, you can still capture the nuance of dialog and quieter moments. It’s a masterful mix that delivers enough to scramble your senses for over two hours.

The extras are all on an extra Blu-ray disc:

Merging Mythologies: (1953) the cast and crew talk about the addition of the Arthur elements and era to the film. This also serves as a nice behind-the-scenes feature for that portion of the production. You’ll get to see a lot of the production mania so common in a Michael Bay film.

Climbing The Ranks: (8:48) The American military loves Michael Bay. He gets access to people and places most filmmakers can’t even get close to. That means filming on real bases and on real ships. There are plenty of actual servicemen who have parts in the film. Just more toys for the Michael Bay toy box.

The Royal Treatment – Transformers In The UK: (27:04) Cast and crew marvel over shooting in England. More behind-the-scenes stuff from the street car chases to the castles and museums to Stonehenge.

Motors And Magic: (14:47) A look at each of the main Transformers in the film. We get a look at their production design and what tweaks were made on the established characters.

Alien Landscape – Cybertron: (7:15) We’ve seen Cybertron before, but this is the first time we set foot on the planet and have battles. This feature takes us behind the scenes from production design to stunts.

One More Giant Effin Movie: (6:45)  A montage of Michael Bay directing the film.

Wahlberg — with his unique combination of swagger, commitment, and earnest ridiculousness — is the only one who emerges from this thing unscathed. I mean, the man once talked to a tree on screen, so of course he’s down for interacting with Autobots or playing out the unbelievably dumb trope where Yeager and Viviane are tearing a room apart during their search for the staff, but the people in the next room assume they are having sex. Hopkins, to his credit, came to play, but he’s not in the movie long enough to make a dent, and Sir Edmund abruptly (and hilariously) bows out of the main action right before the final act. I wish he’d taken me with him.