The Wizard of Lies (Blu-ray) 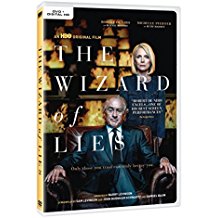 “In our conversation, he seemed relaxed, unfailingly candid, earnest, and trustworthy. That is his talent and his curse.”

You probably know the name Bernie Madoff, the notorious fraudster who used a Ponzi scheme to steal almost $65 billion dollars from his victims. (Yes, that’s “billion” with a B!)  But if you were hoping to gain some insight into the man and his methods, this HBO film isn’t really the place to look. The Wizard of Lies features a fantastic cast, some effective directorial touches, but is too often guilty of telling rather than showing.

“My name is Diana Henriques. As an investigative reporter for The New York Times, I had been covering the Bernie Madoff scandal from the day it began. After months of requests and correspondence, I was finally able to sit down and interview Bernie Madoff.”

The Wizard of Lies begins in August 2010, during the first interview between an imprisoned Madoff (Robert De Niro) and Henriques. (The reporter plays herself and actually acquits herself quite nicely, considering she shares all her scenes with an all-time great actor.) The conversations between Madoff and Henriques serve as a framing device for the main story, which flashes back to late 2008. That’s about the time period where the jig was up for Madoff, who tried to proactively hand out bonuses to his unsuspecting employees.

Speaking of Madoff’s employees, some of his co-workers also happened to be close family members. That includes his sons Mark and Andrew Madoff (Alessandro Nivola, Nathan Darrow), and his brother Peter (Michael Kostroff). Madoff also apparently hid his scheming from his wife of 50 years Ruth (Michelle Pfeiffer). That’s actually the central tension in The Wizard of Lies: is it really possible that Bernie Madoff perpetrated the largest instance of financial fraud in U.S. history without the people closest to him knowing what was going on?

“Let me ask you a question: do you think I’m a sociopath?”

The movie is based on Henriques’ book of the same name, and clearly leans toward the side that believes Madoff’s family was honestly clueless. (While also reinforcing the idea that their ignorance does not make them blameless.) In the film, Madoff repeatedly and confidently states that his family will be safe from prosecution because they had nothing to do with his dirty dealings. But while Madoff may have ensured that his wife and kids stayed out of jail, he failed to account for the emotional and psychological toll his sudden worldwide infamy would have on those closest to him. The Wizard of Lies is at its best when it’s showing us the extended blowback of Madoff’s actions, which includes everything from his sons’ strained relationships with their significant others to Ruth having to find a new stylist.

Those scenes are strong — and many would argue it’s poetic justice that Madoff’s actions resulted in a tragedy within his own family — but, in starting its story with Madoff’s downfall, The Wizard of Lies skips some crucial stuff. On top of lacking a true dramatic arc — the movie starts at a low point (Madoff being arrested) and only goes down from there — we never get a clear sense of why and how he pulled off his unprecedented scheme. We are *told* that Madoff is a pioneer in the financial industry (he created NASDAQ!), but we don’t actually get to *see* much of the alleged wizardry that allowed him to swindle people out of billions.

The director is Barry Levinson (an Oscar winner for Rain Man and a frequent collaborator with De Niro), who finds a way to jazz up the one sequence where we watch Madoff bamboozle an eager investor. (We also watch Bernie easily bluff his way out of trouble with the SEC.) Levinson works in an almost clinical, detached style that fits his lead actor’s performance. That being said, there are some effective flashes of visual verve. In addition to the scene with Madoff sucking in that eager patsy, there’s a great scene between Bernie and Ruth where the unsuspecting wife is literally kept in the dark. Levinson and cinematographer Eigil Bryld focus on light quite a bit; the idea of the Madoffs’ lives being exposed to the harsh light of the public is a recurring theme.

The Wizard of Lies is a welcome return to form for De Niro after a string of dopey paycheck comedies, even if the result isn’t as explosive as you might expect. Instead of granting the despicable Madoff any charm or charisma, the actor plays him as someone carrying the weight of a decade-long secret on his shoulders. It’s a grumpy performance that doesn’t really explain why so many people put their trust in Madoff, but it works here since the movie is exclusively focused on his downfall. Pfeiffer, one of the most distinct and classically beautiful movie stars alive, effectively disappears into Ruth Madoff’s skin. Her work here made me excited for a potential Pfeiffer run as a chameleonic character actress. Nivola (as the deeply wounded Mark) makes a stronger impression than Darrow (constantly frustrated at being frozen out by his dad) between Madoff’s sons. The other standout is Hank Azaria, as a shady longtime associate of Madoff’s and the only notable  person besides Bernie who seemed privy to his schemes.

The Wizard of Lies is presented in its original aspect ratio of 1.78:1. The 1080p image is arrived at with an AVC MPEG-4 codec at an average of 34 mbps. The movie opens with Madoff being interviewed in prison, and those scenes serve as a framing device for this story. However, it turns out those sequences — with their appropriately bloodless, chilly tones — also informed much of this film’s visual palette. That frostiness carries over to the stately offices and boardrooms where the Madoffs worked, along with the cavernous and luxurious home that became Madoff’s temporary prison. There is some very impressive fine detail on display, particularly during close-ups of De Niro’s weathered face as Madoff. There’s also some low-key terrific shadow detail, most notably during the scene where Ruth is lamenting being kept in the dark; Pfeiffer’s face stays in the shadows, while De Niro/Madoff is in the warm light of the couple’s kitchen. Just like Madoff, this visual presentation isn’t the flashiest operator in town, but it is chillingly effective.

The DTS-HD Master Audio 5.1 track is, not surprisingly, dialogue-driven. However, there is space here for some sonic flourishes. Separation is particularly strong, with the low hum of Evgueni and Sacha Galperine’s score taking up residence in the rear speakers. The most notable explosion of sound comes from the one sequence in the movie where we watch Madoff swindle a client out of money; Levinson stages it as a jazzy, improvisational con job with Madoff as its master conductor. (This is pretty much the only sequence where the subs come into play.) The rest of this track is clean and impeccably well-balanced.

Cast Interviews: (7:31) Actors Robert De Niro, Michelle Pfeiffer, Diana B. Henriques and others discuss the project. De Niro points out that the real-life Madoff conned people by not appearing to con them and letting them come to him. Henriques briefly talks about her prison interviews with the bracingly forthcoming Madoff. We get the expected (and deserved) reverence for De Niro and Pfeiffer, while director Barry Levinson pops up to talk about getting inspiration from the Arthur Miller play “All My Sons.” Presented in HD.

The Wizard of Lies is about one of the most notorious acts of fraud in U.S. history, but I curiously came away not knowing much more about the Madoff saga than I did going in. (I realize it’s not exactly the sexiest subject matter, but I would’ve enjoyed a closer look at the mechanism and motivation behind Madoff’s crimes and why he was so effective.)

Instead, the film mostly uses what is arguably the crime of this century to tell a story about personal responsibility and legacy. It’s an interesting approach to take — and the incredible cast and polished filmmaking make it work — but it feels like there was a lot of meat left on this bone.