Posted in: Disc Reviews by Michael Durr on December 19th, 2017 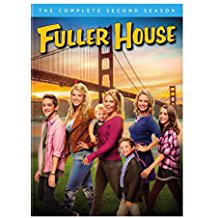 Like most people my age (I’m not telling), I watched my fair share of Full House. I wished I could be as cool as John Stamos, be as funny as Dave Coulier and wished Bob Saget was my dad. Then I grew up and realized I wasn’t as cool as John Stamos, didn’t find Dave to be quite as hilarious (sorry Dave), and still wished Bob was my dad (Actually, even more so when I found out he was quite the dirty comic). Fast forward about twenty years and the Full House theme has been brought back into the present with some familiar faces and a few new ones. Let’s take a look at Season 2 of Fuller House.

If you are one of those people like myself who have never seen an episode of Fuller House and need a quick rundown of characters, well here you go. We have DJ Tanner-Fuller (played by Candace Cameron Bure) who is widowed, a veterinarian and has three kids. The three kids are Jackson (played by Michael Campion), age 13, Max (played by Elias Harger), age 7 and Tommy Jr (played by Dashiell & Fox Messitt), age barely out of the womb (probably around 2). In addition, we have DJ’s sister, Stephanie Tanner (played by Jodie Sweetin) who has moved from London to help DJ raise her kids. Also, she is ridiculously hot. (There I said it, I’m sure it will come up again).

Moving on, we have Kimmy Gibbler (played by Andrea Barber), best friend of DJ who moves in to help with the kids as well. She has a child of her own, Ramona (played by Soni Nicole Bringas), age 13. Rounding out the cast of main characters, we finally have Fernando Hernandez-Guerrero-Fernandez-Guerrero (played by Juan Pablo Di Pace) who is Kimmy’s ex-husband and Ramona’s father.

Last season (pause for dramatic effect), we had DJ caught between two love interests, Matt (played by John Brotherton) and Steve (played by Scott Weinger). Meanwhile, Kimmy decides to not re-marry Fernando so that she and her daughter could stay living with the Tanners. And Stephanie is still single (Yeahie!).

In the first episode of the second season, Kimmy and Ramona come back from their summer dance camp, Jackson has officially entered puberty and Matt and Steve have an announcement for DJ that will change how she feels about the two characters. Also, Fernando decides to move in and Stephanie might have found a love interest (BOOOO!).

The show also has the benefit of the original main starts of Full House making guest appearances such as Bob Saget, John Stamos (who also produces the show), Dave Coulier and Lori Loughlin. It really makes the show feel like it is simply picking up where it left off those many years ago.

The video is in 1.78:1 anamorphic widescreen. For those who don’t know, this show is actually filmed in 4k for Netflix purposes and then downscaled for the dvd release. As a result, it is a very nice picture and it is hard to find faults pretty much anywhere. Color is rich with inside and outside scenes showing a nice contrast and depth. It feels like Jodie Sweetin is right in my living room with me. (Too much? Alright, alright, last girl crush reference) The only negative is the downscaling and the wish to see this in blu-ray or even 4k since that is how this was filmed.

The audio is presented in 5.1 English Dolby Digital. It is kinda funny that this show gets a surround style sound when there really aren’t any surrounds to talk about. Dialog is clear and the few sound effects that do exist come in decently. Nobody should expect bombastic effects here, but what we get is all well and good. English SDH and French Subtitles are also included.

Unfortunately, no Special Features were included.

It should be noted that during the second episode of this season, Alan Thicke did have a guest appearance. It was a very funny and spirited affair (arguably the best episode of the season). Unfortunately it was also one of the last roles he ever played as he passed away on December 13th, 2016. Four days after the episode showed up on Netflix. Very sad indeed.

On a more uplifting note, this second season of Fuller House has more characters, more laughs, and more great moments than ever before. Seriously, how big is this house to fit all of those people? The picture of the outside of the house has nothing on what actually goes on inside. I hate to see their electricity bill.

The video and audio to this set is also strong as the DVD format is going to allow. The only downside is the complete lack of extras. It really is hard to fathom that they couldn’t get some of the actors & actresses to do commentaries, interviews, etc. You know there has to be a Gag reel or two. That aside, if you liked Fuller House Season 1, you should snatch this up in an instant. Or subscribe to Netflix for a month and binge until you start howling like the She Wolf-Pack in your sleep. Your choice, enjoy.

Michael Durr has been reviewing movies for the better part of fifteen years now. He primarily enjoys thrillers, sci-fi, animation and even a little courtroom drama. His favorite films include Escape from New York, the Goonies and anything with Alyssa Milano. When he’s not praising Kurt Russell as the greatest actor of our time or scratching his head over a David Lynch flick, he’s spending time at home in Texas with his lovely wife, Lori and his amazing son. How they put up with him is a mystery, but even Basil Rathbone doesn’t have the time to solve that one.
Tuesday Round Up: December 19, 2017 Holiday Gift Guide Spotlight: Warner Brothers Television on Blu-ray