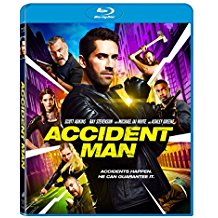 “There was a guy on TV the other night. Had a theory that nearly a quarter of all so-called fatal accidents were actually murders. That’s ridiculous…it’s only about 10 percent.”

It’s one of the more familiar action/thriller tropes: an apparent suicide or accidental death that actually turns out to be an elaborate murder. Usually that story is told from the perspective of the murder victim’s loved one, who will stop at nothing to uncover the truth. What’s cool about Accident Man — a stylish and rollicking action romp — is that it gives us an irreverent look at the cold-blooded killers who craftily carry out these cinematic crimes.

“No room for mistakes in my business.”

Mike Fallon (Scott Adkins) is a high-priced hitman dubbed “Accident Man,” thanks to his penchant for making contract killings look like, well, accidents. (The movie opens with Mike leaving a tipsy victim hanging.) Mike can often be found knocking back a few drinks at the Oasis, a bar that doubles as headquarters for a similarly colorful crew of killers. There’s Mick and Mac (Michael Jai White, Ray Park), an American/Brit pair of bickering former Special Forces soldiers; the unimposing Finicky Fred (Perry Benson), who likes experimenting with off-the-wall kill techniques; Carnage Cliff (Ross O’Hennessy) likes bashing people with axes, while the methods of Poison Pete (Stephen Donald) are pretty self-explanatory; there’s also Jane the Ripper (Amy Johnston), who slices her victims with a samurai sword.

The Oasis is run by retired hitman Big Ray (Ray Stevenson), and the killers get their assignments from a wannabe Brit named Milton (David Paymer), who keeps the identities of his clients a secret. When Mike’s beloved ex-girlfriend — who dumped him for a woman named Charlie (Ashley Greene) — ends up dead, the Accident Man suspects foul play. Mike’s investigation eventually puts him at odds with the rest of the killers at the Oasis, leading to a fateful showdown.

Accident Man is based on the character of the same name that appeared in the British weekly comic Toxic! I never read the source material, but this film adaptation captures the heightened reality and over-the-top aesthetic that can often be found in comic books.

The easy comparison here is the two recent John Wick films, with their deep-dive into killer culture. (The Oasis here = the Continental hotels in Wick.) However, this movie’s jokier, goofier tone puts it more in line with 2010’s underrated The Losers, which was itself an adaptation of a Vertigo comic. Accident Man does soften what I suspect to be some rough edges of its main character; after each kill, Mike needs to violently blow off some steam, and it just so happens that the people he beats up at the start of the film are scumbags who definitely deserve it.

The story plays out pretty predictably, but it’s always entertaining. Adkins also co-wrote the script with Stu Small, and the duo nuzzle up to the interesting notion that maybe Mike shouldn’t be on such a warpath over his ex being killed since it wasn’t personal. (Just like all of the Accident Man’s kills are purely professional.) Adkins effectively holds our attention throughout, even if the movie relies on his wry voiceover narration a little too much. The rest of the cast have a blast playing insane, wisecracking killers, but I particularly liked Stevenson’s paternal performance as Ray. The flashback sequence showing how Ray got Mike into the hitman game probably went on for a bit too long, but Stevenson carried it with his gruff charm.

The real star of Accident Man, though, is the action. Adkins is an accomplished martial artist and director Jesse V. Johnson — showing equal parts flair and force — is a former fighter himself. (The filmmaker jokes about his undistinguished previous career in the Special Features.) As a result, the hand-to-hand combat features steady, unflinching camera work that really lets you see that the performers on screen are the ones throwing hands. (No quick cuts to hide questionable choreography and stunt doubles.) My favorites were the two-on-one confrontations between Mike and Mick/Mac and our hero’s showdown with Jane the Ripper. Of course, Accident Man is also the sort of movie that won’t shy away from having Mike drop-kick a biker off his motorcycle in slow motion.

Accident Man is presented in an aspect ratio of 2.40:1. The 1080p image is arrived at with an AVC MPEG-4 codec at an average of 29 mbps. For a movie with comic book origins and such a rollicking tone, the image here is generally kind of a drag. Mike spends a good amount of his time in the dank Oasis and generally works in the dark, which inherently saps the image of some vibrancy. It wouldn’t be as big of an issue if the black levels here were inky, but too many of the film’s darkened scenes have a dull, murky look to them. The good news is this is otherwise a clean presentation with some cool, muted bursts of colors (you won’t be surprised to hear the reds here are especially vibrant).

The DTS-HD Master Audio 5.1 track, on the other hand, rises to the occasion with this action romp. We hear from the subs right from the outset, with Sean Murray’s propulsive score getting a thumping boost. The subs also help punctuate each blow that is landed during the many instances of hand-to-hand combat. Overall, the mix generally teeters on the edge of being too aggressive, but remains impressively balanced throughout. Dialogue comes through cleanly, fidelity is spot on, and the track doesn’t blow up your living room unless it’s appropriate. (For fight sequences and during a brief death metal performance.)

Commentary with Scott Adkins and Stu Small: The movie’s co-writers are long time friends, and we learn Adkins first proposed the idea of making an “Accident Man” movie to Small more than 20 years ago. As you can imagine, the tone here is jovial — Adkins and Small recorded the track in different places but still managed to have a great conversation — and there is plenty of interesting talk surrounding the movie’s various fight sequences and nods to the comic (shout out to the Satanic Mechanix).

Assassins’ Roll Call: (5:51) Focuses on the colorful crew of killers from the Oasis and the actors who brought them to life.

Violent Ballet — Filming the Fight: (4:23) Second unit director Tim Man gets a lot of love for his work choreographing the movie’s bone-crunching fight sequences. There’s also some cool pre-visualization/finished product comparisons while cast members collectively geek out about the various martial arts styles they incorporated into their fights.

Accident Man is a fun antidote to the PG-13-ization of action movies. (Adkins and Small namecheck Steven Seagal movies of the late ’80s/early ’90s as sources of inspiration.)

The tone is light and the fights are on-point. Definitely give this one a look if you want to turn your brain off and enjoy a movie that consistently kicks butt.