Posted in: Disc Reviews by Brent Lorentson on February 9th, 2018 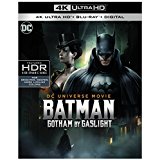 The notion of having one of comics’ famous costumed detectives face Jack the Ripper is simply one of those ideas I can’t help but smile with geeky joy thinking about.  Batman: Gotham by Gaslight, takes the caped crusader back to the early turn of the 19th century, a time when Gotham City was in its early days, before skyscrapers flooded its landscape.  This unique take does offer up some fun twists on the legend of the character ,but also takes many liberties of historical events that actually took place.  This kind of revisionist history can be fun; take Inglorious Basterds for instance, but how much should you really play with actual history and set character mythology? This is definitely a new playground for the creators to play with, so how does the animated film shake out?

At the start of the film we meet (Poison) Ivy, who has taken a different career path than most may be used to. It is followed by her confrontation with the Ripper, and it doesn’t go so well.  It’s an opening like this that lets the viewer know that the familiar cast of heroes and rogues are not safe in this world, so forget what you think you know, and try to sit back, relax, and try to enjoy the story that unfolds.

While the city of Gotham is in fear of the Ripper, the city is also making preparations for the World’s Fair, which is nearing its big reveal and is projected to rival the previous fair that had the reveal of the Eiffel Tower. For those history buffs out there, yes, the Gotham World’s Fair is a replication of the one that was really in Chicago. With sightings of the Batman around the city, there is a concern that the Batman could actually be the Ripper. Commissioner Gordon assures the city elite that the Ripper and the Batman will be brought to justice before the opening of the fair.

As Batman is in pursuit of the Ripper, he eventually is faced with enlisting the help of an actress, Selina Kyle. I’ve always been of fan of the dynamic between Batman and Catwoman, but here we get to see them out of costume and working as Bruce Wayne and Selina Kyle, which is a little refreshing.  There are numerous other characters from the comics who find their way into the film, some that are subtle while others play more substantial roles. For some there may be a twinge of disappointment that this isn’t so much about a crime-fighting Batman, but instead we get to see him as a detective.  For me this is great. After all, the caped crusader is supposed to be the greatest detective ever, yet very rarely do we get to see that side of the character.

The design of the film is beautiful. Despite being a different time period, the animators do a wonderful job at staying close to the tone and look of the traditional Gotham we are used to.  There is a fun rooftop chase that feels fresh from what we’ve seen before considering Batman doesn’t have all the toys yet that we are used to him having, but just the overall look, with the bodies running in and out of the shadows and in silhouette, was just cool.

Where the film loses me is in the final act with the big reveal of who the Jack the Ripper killer is.  While I won’t spoil it here, what frustrates me is that the allure of the Ripper after all these years and what makes him so horrifying is the fact that we don’t know who he was.  We don’t know if he was ever caught; if he died, or simply moved on to kill in another city. Why do movies feel the need to SOLVE the crime? No matter what twist you throw at the story, it never seems to work and deliver a satisfying conclusion to the film.  While this is one of my favorite animated films from DC, I still feel frustrated with the ending, and for me there’s nothing worse than a great film that has a disappointing final act.

Batman:Gotham By Gaslight  is presented in its original aspect ratio of 1.78:1. The ultra- high-definition 2160p  image is arrived at by an HEVC codec with an average bitrate of over 90 mbps. It’s a short feature without extras, so this is the highest bitrate I’ve encountered yet. The numbers peak at over 120 mbps. There’s a lot to like about this ultra-high-definition image presentation. There is some wonderful shading in the animation, and this disc delivers it. In the beginning you see Poison Ivy dancing with a light green translucent veil over flesh and darker green clothes. It’s a nice effect that works because of the extra color definition and depth of the presentation. Black levels reveal nice silhouettes and shadows that dominate the atmospheric animation. A fire gives us bright orange and red spots against a nice dark background. It’s both moody and rather beautiful to look at.

The DTS-HD MA presentation is quite subdued. The score is minimal and only really there to amp up the atmosphere. Surrounds don’t ever get very aggressive, but it’s all part of a nice intimate audio design that accents the dialog over everything. Subs provide some real depth without ever quite blowing up on you. I’m a little disappointed that the disc doesn’t have the more UHD-appropriate Dolby Atmos or DTS:X presentations.

Commentary with Executive Producer Bruce Timm, Writer Jim Krieg, and Director Sam Liu: Despite how many times these guys must’ve viewed this film, they seem to have a lot of enthusiasm watching and discussing the film.  There is a lot of insight about how they had to create this new world and how much work went into the redesigning of all the characters. One of the more fun and insightful commentaries for an animated film.

While the DC live-action films continue to disappoint, the animated films are still a blast to watch.  I really like the film; it’s the third act that just has me groaning. Sure, other people will disagree and think it’s a fun conclusion, but for me it just left me feeling raw.  I hope from here we get more films that go into the other Elseworlds of not just Batman but other DC characters, because I’m simply a fan of these crazy what-if scenarios.

Brent Lorentson is a horror writer and film critic based out of Tampa, Florida. With a BA in Digital Film, he co-wrote and co-directed Scavenger Hunt. His short stories have appeared in various horror anthologies. In 2019 his short script Fertile Blood will be a part of the anthology horror film Slumber Party. He is currently working on his first novel A Dark and Secret Place set to be released in late 2019. Favorite Films: Taxi Driver, Fight Club, I Saw the Devil, The Wild Bunch, Dawn of the Dead, A Clockwork Orange, Pulp Fiction, Heathers, The Monster Squad, and High Fidelity.
Accident Man (Blu-ray) Fifty Shades Freed