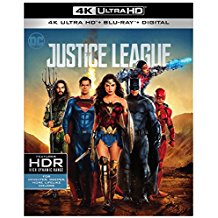 You can’t save the world alone. You also can’t properly kick off your week without knowing what Blu-ray/4K/DVD releases are on the horizon. I’m sure you’ve probably guessed this by now, but one of the titles being released this week is Warner Bros. superstar-laden superhero smackdown Justice League, which we’ll be reviewing both on Blu-ray and in 4K. It’s also case closed for Warner as they release Major Crimes: The Sixth and Final Season. Elsewhere, Indiepix is feeling spirited thanks to Pastor Paul, while MPI Home Video delves into the life of famous cop Frank Serpico. CBS/Paramount fights The Good Fight: Season 1, and Cinedigm searches for love When the Starlight Ends. (FYI: you can win a free copy of When the Stralight Ends.) Last and certainly not least, Lionsgate shuffles into the mix with Fear the Walking Dead: Season 3.

On top of all those home video releases, we are also embarking on an adventure to review the new big screen incarnation of Tomb Raider. One last reminder before signing off for the week: if you’re shopping for anything on Amazon and you do it through one of our links, it’ll help keep the lights on here at UpcomingDiscs. See ya next week!