Posted in: Disc Reviews by Brent Lorentson on March 14th, 2018 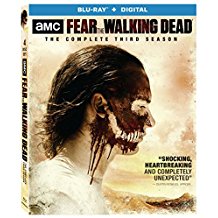 I’ve been a fan of The Walking Dead ever since the first episode aired on AMC. I’m a sucker for zombie films and the original Dawn of the Dead remains as one of my all-time favorite horror films. I mention this because when the idea came along to do a spin-off of The Walking Dead, I was stoked. But when Fear the Walking Dead first aired, I have to admit there was something about it that just didn’t hook me. So I gave up after a couple episodes. I wish I had held out just a little bit longer. Before jumping into season 3 of the show, I decided to revisit the series and start with a fresh set of eyes from the first season to catch up…and what a fun ride it has been!

For those that are unfamiliar with the show, Fear the Walking Dead starts in Los Angeles when the zombie outbreak has only just begun. If you are worried it’s nothing more than a West Coast version of the same story, let me set your mind at ease by saying, though it has similar themes and circumstances, Fear the Walking Dead is a darker and more intimate tale.

Season 3 opens with 3/4ths of the Clark family being taken to a military base that has been set up along the Mexican border. This also happens to be where Nick (Frank Dillane) was taken following the border conflict that occurred at the end of season 2. This isn’t a joyous reunion; instead we see the Clark family thrust into a horrific scene of brutality as we discover what is going on in the depths of the military base with survivors that are being “processed.” It’s at the base, though, where Madison (Kim Dickens) and Alicia (Alycia Debnam-Carey) are introduced to Troy Otto (Daniel Sharman), one of the soldiers on the base. He also seems to have power over who lives and dies there. The stay at the base doesn’t last long as zombies infiltrate it and everyone has to evacuate.

The ranch is where a good majority of the third season takes place. This is where Madison seems to feel it is most safe from the zombie-filled wasteland and she can be with her family. Running the ranch though is Jeremiah Otto (Dayton Callie) and his sons Troy and Jake (Sam Underwood). I was worried this would go the direction we’ve seen before in The Walking Dead, but instead the threat that comes to the ranch actually builds to one of the most satisfying conflicts we’ve seen on either show. I don’t want to spoil what this conflict turns out to be, but it does develop into one of the most sympathetic “villains” that, as a viewer, will leave you questioning who you want to root for.

Despite being a newcomer to the ranch, Madison is able to insert herself into the Ottos and their decision-making process in how to maintain the camp. Nick continues to be as adaptable as ever, as he looks to befriend Troy while Alicia and Jake develop a relationship of their own.

One of the strengths of the show is that it doesn’t have a sprawling cast and for the most part it attempts to keep things about the Clark family. This has always been about the Clark family and everyone else has simply been tagging along for the ride. Where season 2 seemed to focus more on Nick wrestling with his demons and trying to find a place in this new world, season 3 seems to focus more on Alicia stepping up and accepting the darkness that comes with surviving in the zombie apocalypse.

We do get to find out what happened to Daniel (Ruben Blades) since his character was left behind many episodes ago in season 2. Victor (Colman Domingo) is another character we catch up with, and he continues to be the scheming bastard we’ve grown to love over this time. While I do love these two characters, they do play a part in the show’s greatest weakness: how everything just coincidentally seems to bring everyone together. I don’t know what is harder to believe with this show: zombies or how these characters manage to keep crossing paths at just the right time. There’s a water shortage at the ranch…Daniel ends up finding a place working security detail at a dam. Then towards the end of the season when the family is separated, in the most impossible of circumstances, we see them brought together again. I mean we’re talking travels that take characters in separate directions, days apart, and somehow they are together again.

Despite this logistical issue I have with the show, seeing how far it has come with its character development is impressive. The show has a lot of heart despite the fact that every emotional attachment is dealt with some heartbreaking challenge. Seeing how far Madison will go to protect her family at times gets disturbing. The fight to protect the ranch and its people has offered up some great drama and action for season 3. Along the way, being introduced to the trading post has offered up some very nasty potential. I mean, imagine a place that makes Las Vegas seem like Disney world…where nothing seems to be off limits.

As for the true star of the series — the zombies and the make-up FX — you can’t ask for anything better. This season, KNB has stepped up its game and has delivered some crazy kills and visual effects. There is a sequence in particular where we see a grocery cart filled with zombie heads being carted across the street; what this leads to is beautiful and nasty stuff that shows me that the people involved are taking some chances. The visuals are on par, if not better, than what you would see in a big budget film.

While I wasn’t all that impressed when the series first began, I can honestly say I’m glad I gave this show another look now that I’ve seen where season 3 has taken us

Fear the Walking Dead: The Complete Third Season is presented in an aspect ratio of 1.78:1. The 1080p image is arrived at with an AVC MPEG-4 codec at an average of 25-33 mbps. From a cinematic point of view, this is filled with beautiful vistas and drone shots that give the show a much more widescreen look than in previous seasons. Being shot in digital (The Walking Dead is actually shot on 16mm) gives the show a cleaner look with the lack of grain. The color seems to be saturated just enough so that it really doesn’t pop, but not enough to affect some truly remarkable visuals. Whether it’s the season’s opening shot of the Clark family being led to the base or the amount of detail captured when the show reaches the busy trading post, there is a vast amount of texture to take in. As for the black levels, there is an impressive amount of separation and detail that is still captured whether it is in low-lighting shots or exterior night shots. While listening to the commentaries, the filmmakers reveal how many VFX shots are actually in the show and most of the time it is a seamless blend. There is one shot of a horde of zombies that sticks out as being a bit too CGI, but it isn’t anything to distracting.

The Dolby Digital True HD 5.1 track is impressive here considering this is a TV show and not a big budget feature film. The scenes with gunfire and fighting zombies can be exciting, but it’s the more intimate moments that stick out the most for me. Whether it’s the simple yet grotesque sounds of a bird feasting on a member of the living dead or the simple use of the buzz of flies, it’s the little things that give this atmosphere. There are a couple moments where the silence can be so effective with building the tension, and then from one of the side speakers you hear the groan of a zombie and it can be unsettling. The music has a fair amount of drum work that gives the subs plenty of use as well. Most of the dialogue comes through the speakers front and center and remains clear throughout.

Audio Commentaries: There are three commentary tracks for episodes 1, 8 and 16. Each track is actually entertaining and filled with tidbits about what really goes into these episodes. Kim Dickens is on each of the tracks and is joined by crew members and other actors from the show; it’s nice to listen to her insight.

Deleted Scenes: Unfortunately there is not a “Play all” button, so to watch these you have to go through them one by one. The deleted scenes come from 9 of the episodes. The only one I wish they kept is from episode 2, where we see Victor come across a familiar face that is now in zombie form. It may not further the story, but it is a nice little moment that gives finality to his interactions with this character.

While it seems The Walking Dead is running out of steam, Fear the Walking Dead only continues getting better. This season really comes together despite my issues with the coincidental reunions that keep happening. The dark direction this show manages to go gives us a peek at how bad things could be when the end of times is truly upon us. How the show manages to get away with the violence is a surprise, but I’m not complaining at all.

This is a series horror fans can embrace…but if you have a weak stomach, you may want to pass because this show is not for the squeamish. With Morgan from The Walking Dead crossing over to Fear the Walking Dead, I’m excited to see what will come next for our merry band of survivors.

Brent Lorentson is a horror writer and film critic based out of Tampa, Florida. With a BA in Digital Film, he co-wrote and co-directed Scavenger Hunt. His short stories have appeared in various horror anthologies. In 2019 his short script Fertile Blood will be a part of the anthology horror film Slumber Party. He is currently working on his first novel A Dark and Secret Place set to be released in late 2019. Favorite Films: Taxi Driver, Fight Club, I Saw the Devil, The Wild Bunch, Dawn of the Dead, A Clockwork Orange, Pulp Fiction, Heathers, The Monster Squad, and High Fidelity.
Tuesday Round Up: March 13, 2018 Girlfriends: The Complete Series