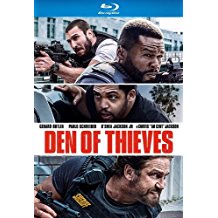 “We just shoot you. Less paperwork.”

Most of us like a good heist film. It’s fun to watch clever crooks work out complicated plans and then execute them. It’s not hard to root for the crooks if they’re likable enough characters. With me I almost have a kind of reluctant respect for criminals who are able to outsmart sophisticated systems. There’s something about the perfect crime that fascinates a film lover like me. Logan Lucky was one of the better heist films I’ve seen in years, and I was ready to spend an hour and a half being impressed by ingenious crooked plan that runs like clockwork once again. What I ended up with was a horribly overlong 2 hours and 20 minutes. And the only thing that was running like clockwork was my impatience to get to the end. Logan Lucky was clever and a lot of fun. Den Of Thieves? Let’s just say I was not amused.

The film begins with one of those bank robberies where the thieves work like a well-oiled bank-robbing machine. The bad guys take down an armored car with almost flawless precision. I was even starting to like these guys until the plan suddenly takes a bad turn and turns ultra-violent. Without giving away the specifics of this introduction crime, it turns bloody and violent. From that point onward there was going to be no rooting for the perps. Sure, it’s not the way that the crew leader, unfortunately named Merriman (Shreiber), wanted things to go down, but these guys were armed to the teeth, so it’s not like he wasn’t willing for it to happen just as it did. The first piece of the film’s puzzle drops into place when we discover that they did all of this for an empty truck. With all of their planning and craftiness, it turns out that’s exactly what they expected to find.

Enter brutal cop Nick Davis, played by the film’s star, Gerard Butler. He runs an off-the-books police unit called the regulators. They look like a street gang complete with tats and total disregard for any rules or boundaries. They immediately sweat the crew’s driver and perceived weakest link, Donnie, played by Ice Cube’s son O’Shea Jackson, Jr. These guys don’t have a problem with torture or putting someone’s life in danger in pursuit of their guy. In some rather inexplicable leaps of logic, they’re quickly on to Merriman and use Donnie to find out what this crew is really up to. A dull game of cat and mouse finds the two crews facing off.

The amazing thing here is that it took 140 minutes to play out this game and still not give us very much of that heist planning that we go to these films to observe. Instead too much time is wasted down rabbit holes that never really develop or contribute anything to the film’s conclusion. Examples include spending too much time having Nick deal with a fed-up wife after he has an affair. The couple of scenes here are obviously intended to shore up his tough scum personality. We pretty much get all of that with his kidnapping of Donnie, and at least that contributed something to the plot. The family stuff is never revisited and plays no real role in the film going forward. Another example deals with the hints of corruption that Nick’s team is obviously a part of but never really fleshed out. What passes for character development here is merely scenes intended to give us nasty snapshots of Nick and Merriman. We know what they are, for certain, but we never get to know who they are. The end result is a film full of unlikable characters and an ultimate indifference to what happens to any of them.

It doesn’t help that Gerard Butler continues to play American characters with an absolutely horrendous fake accent. He slips in and out of his own accent with such inconsistency that it becomes rather a joke. I can see this being a great drinking game on home video. You have to take a shot every time he slips up. Of course, you’ll be sloshed before you get 15 minutes into the film. But then again, being drunk might actually help you with the incredibly bad pacing. With all of this running time we actually get very little in the way of heist planning or execution. Someone should have informed director Christian Gudegast that it’s exactly that stuff that we go to a heist film to see. This is his first feature film in the director’s chair, so I could forgive most of the sins he commits here except for one. Did I mention this thing runs 140 minutes?

Den Of Thieves is presented in its original aspect ratio of 2.39:1. The 1080p image is arrived at with an AVC MPEG-4 codec at an average 30-35 mbps. The high definition image presentation is not going to wow anyone. The best that can be said here is that we get a good representation of the gritty world of the LA streets. There isn’t a lot of color, texture or even detail to be found. Black levels are average and that’s the word that best describes it all.

The DTS-HD Master Audio 5.1 is not nearly as aggressive and powerful as the subject suggests. I can forgive an average video presentation because it best represents the style and atmosphere of the film. But this release should be swimming in great surround and should be completely immersive. Instead the sound is actually quite dull with weak sub action and rather lame surrounds. dialog doesn’t even punch through the way I expected here. It’s a muddy mix that doesn’t lend itself to the action.

There is an option for the theatrical cut and an unrated extended cut that only adds a couple of minutes to the film. Nothing extraordinary to be found. You also get an Audio Commentary with Director and Producer but only in the theatrical cut.

Alternate Ending: (4:51) There is only about 5 seconds of addition here and doesn’t change the ending really at all.

Outtakes: (23:22) These are really more like deleted scenes. There are 11 with a play all option.

There are 3 2 minute promo features that are nothing more than extended trailers.

Not everything in this film is all bad. Pablo Schreiber delivers a pretty solid performance as Merriman with what little he has to work with here. There are also some crazy cool action scenes that got my heart beating a little bit there, perhaps saving me from the coma-inducing plot. I strongly suspect you could chop about 40 minutes off the film and have something much more satisfying in the end. There’s a bit of a twist that isn’t all that hard to see coming. It’s a very ordinary film with plenty of flaws. And by the way, I should mention the thing runs 140 minutes. It feels more like 140 days. There’s only one way to keep people in their seats for this one. “Anybody moves you shoot them. Understand?”

Gino Sassani is a member of the Southeastern Film Critic's Association (SEFCA). He is a film and television critic based in Tampa, Florida. He's also the Senior Editor here at Upcomingdiscs. Gino started reviewing films in the early 1990's as a segment of his local television show Focus. He's an award-winning recording artist for Omega Records. Gino is currently working on his 8th album Merchants & Mercenaries. Gino took over Upcomingdiscs Dec 1, 2008. He works out of a home theater he calls The Reel World. Favorite films: The Godfather, The Godfather Part II, The Body Snatcher (Val Lewton film with Karloff and Lugosi, not the pod people film), Unforgiven, Gladiator, The Lion King, Jaws, Son Of Frankenstein, The Good, The Bad And The Ugly, and Monsters, Inc.
Backstabbing for Beginners (Blu-Ray) Genius: Season 1 — Einstein