I’m Dying Up Here: Season One 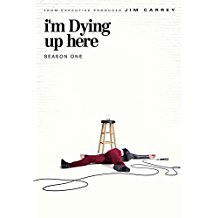 “Look, all funny guys are damaged.”

It’s no secret that some of the greatest and most memorable stand-up comics of all time — Lenny Bruce, Richard Pryor and Robin Williams, to name a few — were as troubled as they were talented. Of course, turning their inner turmoil into comedy was a big part of what made them legends. Showtime’s I’m Dying Up Here is a dramedy about a group of struggling Los Angeles comics in the 1970s. But the show is at its worst when it takes the art of stand-up comedy way too seriously.

– “These are tortured f—ing souls…”

– “…and here I thought we were talking about comics.”

I’m Dying Up Here is set in 1973 and largely takes place within the raucous comedy club owned by Goldie Herschlag (Melissa Leo), who has helped launched many stand-up comics into stardom. The idea is that if you pay your dues at Goldie’s, you can achieve the pinnacle in stand-up comedy at that time: an appearance on The Tonight Show with Johnny Carson (guest star Dylan Baker), which had moved from New York to Los Angeles the year before. (And if you’re extra lucky, Johnny will invite you to chat on his couch following your set.) That’s precisely where Clay Appuzzo (Sebastian Stan) finds himself at the start of the series: he kills on Carson, and he “gets the couch”…unfortunately, Clay’s professional success isn’t all it’s cracked up to be.

Among the regulars at Goldie’s who are trying to follow Clay’s path to The Tonight Show are his ex-girlfriend Cassie Feder (Ari Graynor), a sharp comic struggling to find her point of view on stage; Cassie’s current boyfriend Bill Hobbs (Andrew Santino), whose aggressive jerkiness serves him much better on-stage than off; Ralph Carnegie (Erik Griffin) is an African American Vietnam War vet who writes for Sonny and Cher and locks horns with gifted young black comic Adam Proteau (RJ Cyler). Edgar Manny Martinez (Al Madrigal) is a Mexican comic struggling to transcend the label of “Mexican comic,” while Sully Patterson (Stephen Guarino) is an affable dude struggling to provide for his wife and new baby. There’s also Eddie Zeidel (Michael Angarano), a friend of Clay’s from Boston who moves to L.A. with goofy/lazy buddy Ron Shack (Clark Duke). Finally, Ep. 5/“The Return” introduces us to Nick Beverly (Jake Lacy, listed as a series regular throughout), a handsome hot shot set to appear on The Tonight Show.

I realize that’s a lot of charactes and personalities to track, but I’m Dying Up Here is at its absolute best when it gives these characters room to bust each other’s chops. Almost all of the insults cross a line, but the group largely remains friendly because they can all appreciate a good joke. (There’s a funny sequence in Ep. 7/“My Rifle, My Pony, and Me” where a pair of bitter rivals temporarily end up on the same side of a brawl after learning that a radio DJ had stolen one of their jokes.)

Another thing they all have in common is a burning desire for stage time. Goldie has installed herself as a kingmaker (and queenmaker) with her club: comics have to first pay their dues on Open Mic before moving on to The Cellar and (if everything clicks) graduating to the Main Stage. As a result, many of the comics are left battling for scraps of stage time, which leads to them fleshing out their act in unconventional places (a memorial service, a deli, an AA meeting) just to get in front of an audience.

I’m Dying Up Here is created by David Flebotte, a producer on fellow Showtime period piece Masters of Sex. Besides The Tonight Show, the series has fun re-creating ’70s TV touchstones like Let’s Make a Deal, The Dating Game and more. The show also heavily (over)relies on an assault of classic 1970s tunes. (One of the most effective uses of music involves Dionne Warwick’s “Walk on By,” but the season concludes with an oddly triumphant singalong to King Harvest’s “Dancing in the Moonlight.”)

The series also counts Jim Carrey among its executive producers. The mega-successful movie star most recently gained attention for his soul-baring Netflix documentary “Jim & Andy: The Great Beyond.” So it’s no surprise that practically every episode of I’m Dying Up Here features a tortured artist monologue about the higher calling of stand up comedy. Look, I have tremendous respect for stand-up comedy as an art form; some of the most affecting moments on the show involve a comedian bombing on stage to scattered laughs or deafening silence. The problem is this sort of speechifying is indulgent and too melodramatic for a show that is at its best when it exudes relaxed charm.

Then again, Leo doesn’t exactly scream “relaxed charm” here, but she’s nevertheless a strong leader for this ensemble. (Goldie is based on real-life comedy club legend Mitzi Shore…yes, Pauly Shore’s mom!) The actress won an Oscar for similar brassy work in The Fighter and she makes for an intimidating mother hen. The show is a little uneven, however, when it tries to balance Goldie’s self-interest with genuinely shepherding her comics’ careers.

Among the comics, Graynor is the standout as Cassie more than holds her own among her peers…and against sexist hecklers. Duke and Angarano often star in their own amusing side-adventures, while Santino’s commitment to Bill’s condescending crankiness is impressive. Cyler as newcomer Adam also made me believe that the young black comic could be the next big thing. On the other hand, Lacy’s slick Nick mostly comes off as a poor man’s Clay. (Stan makes an impression with limited screen time in the pilot.) The show also features a bunch of appearances from familiar faces. Alfred Molina pops up in the pilot in a bit role as Adam’s manager, and Richard Pryor (played by Brandon Ford Green) briefly serves as a character on the show.

I’m Dying Up Here: Season One features all 10 episodes on three discs. There are no special features. The second season premiered last month, but there’s no word yet on a third season. Towards the end of this first season, a storyline pitting Goldie against a rival comedy club backed by slimy pimp Barton Royce (Obba Babatunde) takes center stage. Frankly, I was infinitely more interested in seeing whether the comics we’d gotten to know would kill or bomb next time they got in front of an audience…regardless of where that stage was.