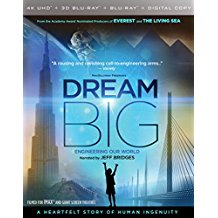 “Every bridge, every building grows from an engineers imagination.”

Dream Big: Engineering Our World is the second of Shout Factory’s latest collection of IMAX films to be brought into the capable arms of the UHD/4K format. And while this film doesn’t take us so much into the natural beauty of some picturesque place on our planet or deep into the darkness of space, it does deliver a rather grand look at some of the wonders of the man-made world. Both films were directed by Greg MacGillivray, which binds them together in a somewhat nice little bow.

For this film MacGillivray was approached by American Society of Civil Engineers to put together an film that might inspire the next generation of engineers, and that’s exactly the direction this film travels. The film focuses on four young women engineers and how they were inspired to do grand things. One leads a group to create a bridge for an African village where 50 children have been killed crossing the river that separates them from their school. Another leads a high school team to build an inexpensive underwater robot that beat out MIT students at a national championship event. Another teaches children to use their imagination to create structures to resist wind and earthquakes. And another helps to create bridges that resist damaging wind conditions. We get to see these inspired young engineers not only use their skills to help others but to share their knowledge with young engineers-to-be.

The film is appropriately narrated by Jeff Bridges. That was a bit of clever casting, to be sure. Like Robert Redford in the previous film, his voice doesn’t offer a lot of passion but rather a slow and steady methodical companion to the visuals.

If you think this film is about modern groundbreaking buildings and bridges, you would be absolutely correct. We get to witness the creation of a Shang-Hi building that stands 120 stories in the air to help elevate the cities overpopulation issues. It has a neat little twist that allows winds at such elevations to move around the building, providing less resistance and a more stable structure. But the film takes us to older accomplishments like the Golden Gate Bridge and Hoover Dam. It doesn’t stop there. We get to visit hidden sections of the Great Wall in China. It all offers a nice bit of perspective that gives us grand visuals to take advantage of the big theater screen and educate a little along the way.

Dream Big is presented in a modified aspect ratio of 1.78:1. The ultra-high-definition 2160p  image is arrived at by an HEVC codec with an average bitrate of 65 mbps. Once again there are some distorted images because of the choice to keep the aspect at a constant wide-screen ratio. The film is also offered in both SDR as well as the far superior HDR format. The only reason you would opt for the SDR version is if you ended up with an earlier 4K television that does not have HDR capability. Here the ultra-high-definition image can give you a wonderful sense of depth. The height of these buildings might actually give you a bit of vertigo. I’ve seldom felt height on a screen quite as well as it’s offered here. Black levels are superb, and you couldn’t ask for more sharpness and resolution. Of course, it helps that the original material was shot in 65mm. These films are quite immersive.

The Dolby Atmos is mostly there to support the dialog and narration. There is very little going on in the surrounds. You can hear the bustle of a city scene with car engines and horns or the hammering of a construction scene. The music isn’t intrusive here, and it’s a very comfortable audio presentation.

The extras are on both discs. The Blu-ray disc also offers a 3D version of the film.

Hot Topics In The World Of Engineering: (21:18) There are five short films here with a handy play-all option. Some of this expands on topics from the film, while some new innovations are looked at like autonomous cars, alternate energy, and a PSA for Engineers Without Borders.

Behind The Scenes: (13:48) Again some ground is repeated from the film. MacGillivray talks about his hope to inspire engineers, and we get a look at the equipment used to make the film.

It’s my sincere hope that these IMAX films continue to get the 4K treatment over at Shout Factory. It’s a risk. I’m sure they aren’t selling units in the same air as popular television and film. This is also a way for people to appreciate their home entertainment systems or home theaters. This is the kind of thing you really can’t get from streaming. Yeah, you can stream 4K, but not at this kind of bitrate. Compression continues to be a big issue in streaming as well as buffering issues. Thankfully, these kinds of experiences are out there for the true collector. “Those of us who dream big can carry that joy of creativity all through our lives.”

Gino Sassani is a member of the Southeastern Film Critic's Association (SEFCA). He is a film and television critic based in Tampa, Florida. He's also the Senior Editor here at Upcomingdiscs. Gino started reviewing films in the early 1990's as a segment of his local television show Focus. He's an award-winning recording artist for Omega Records. Gino is currently working on his 8th album Merchants & Mercenaries. Gino took over Upcomingdiscs Dec 1, 2008. He works out of a home theater he calls The Reel World. Favorite films: The Godfather, The Godfather Part II, The Body Snatcher (Val Lewton film with Karloff and Lugosi, not the pod people film), Unforgiven, Gladiator, The Lion King, Jaws, Son Of Frankenstein, The Good, The Bad And The Ugly, and Monsters, Inc.
Tuesday Round Up: July 31, 2018 Counterpart: Season 1 (Blu-ray)