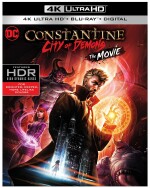 “But this place…too much light.”

To put things mildly, Warner Bros. still has a bit of a ways to go before its stable of DC Comics superheroes catches up to Disney’s dominant Marvel Cinematic Universe. However, Warner and DC have long had the upper hand on both the small screen (The Flash, Legends of Tomorrow) and with their animated, direct-to-video offerings. Constantine: City of Demons represents the best of those latter two worlds: City of Demons began its life as a short-lived TV series before bringing smart-ass occult detective John Constantine back to life for this moody and thoroughly entertaining feature-length adventure.

Of course, the demon hunting DC hero previously had his turn on the big screen with 2005’s stylish Constantine, which starred Keanu Reeves and left a lot of comic book fans unsatisfied by straying too far from the character’s origins. The fanboys were a lot more receptive to NBC’s small-screen, live-action Constantine adaptation, starring Welsh actor Matt Ryan. And just like the stubborn spirits Constantine must periodically vanquish, the character just won’t die. Ryan has reprised the role in CW superhero shows like Arrow and Legends of Tomorrow, along with voiceover work in animated films like Justice League Dark.

“Everybody in this town sells their soul for a dream.”

While Constantine had to share the marquee with Batman and several other heroes in Justice League Dark, he is the star of the show in City of Demons. Constantine (Ryan) is approached by Chas Chandler (Damian O’Hare), his best friend from childhood. Chas’s daughter is in what appears to be a demonically-induced coma, so he enlists Constantine’s help. During an attempted exorcism, Constantine has a vision of an address in Los Angeles, so he and Chas travel to the alleged City of Angels. It’s there that he meets the devious Beroul (Jim Meskimen), who has trapped Trish in a coma until Constantine agrees to eliminate his demonic competition in L.A. The case also forces Constantine to grapple with memories from a traumatic incident during his younger days at Newcastle involving his former mentor Alex Logue, an especially deadly demon named Nergal, and another trapped little girl.

City of Demons originally debuted on CW Seed, a streaming service that I had no idea existed until just now. Only 5 episodes made it on the air (er, online), but the story has been turned into this 90-minute film. That being said, City of Demons — The Movie doesn’t at all feel like writer J.M. DeMatteis had to pad his story to make it feature-length. Instead, this is an impressive fusion of Raymond Chandler Los Angeles detective mysteries and Constantine’s demon-fighting exploits.

The movie is also rated R, which means the language is saltier than your typical cartoon (although there’s nothing too outrageous here) and the violence is notably bloodier. That includes the sequence showing us Nergal’s horrific rampage in Newcastle and a truly disconcerting scene in Beroul’s L.A. party involving guests getting thrown into silent films and being tortured on screen.

Ryan, who clearly relishes the role, gets a wide range of emotions to play now that Constantine is front and center in City of Demons. In addition to his predictable distaste for Los Angeles, Constantine is quite literally haunted by the Newcastle incident — the movie ingeniously gives him some actual inner demons to wrestle with early on — which lends the performance an extra air of defiance and guilt. The rest of the voice cast is strong as well. In addition to O’Hare’s amusing work as “loyal idiot” Chas, I enjoyed Laura Bailey’s playful performance as Constantine ally Nightmare Nurse and Rachel Kimsey’s enigmatic Angela. Rick D. Wasserman also voices brutal Aztec god Mictlantecuhtli, who plays a key role in the violent finale.

Fortunately, the movie’s merits go far beyond blood and some bare butts. Although Constantine’s battle with Beroul’s rival demons felt a bit rushed — there seemed to be an opportunity to make that a gauntlet of sorts — the movie’s gut-punch ending more than makes up for it. Comic book characters get killed and brought back to life all the time, so I really appreciated that the conclusion found a different way to examine the idea of sacrifice.

Constantine: City of Demons — The Movie is presented in an aspect ratio of 1.78:1. The ultra-high definition 2160p image is arrived at with an HEVC codec at an average of 64 mbps. It’s no surprise that the noir-ish world John Constantine inhabits in City of Demons doesn’t come with a La La Land-esque explosion of color. The image here is generally (and appropriately) drained of quite a bit of color, although this R-rated animated flick impressively shows us some deep, dark reds whenever there’s bloodshed. Black levels are fantastically inky and contrast is pretty spot on. While the visuals here aren’t meant to be as dazzling as a big-screen animated feature, this strong HDR presentation is precisely as shadowy and atmospheric as the material requires.

The DTS-HD Master Audio 5.1 track announces its presence right from the start, thanks to the low rumble of a nightmarish thunderstorm and a scream that starts in the front speakers and spreads across all channels. Dialogue is completely clear and perfectly balanced with the track’s other elements, which includes just the right amount of background noise during quieter scenes outdoors. Of course, the track really shines when the action — and all the demonic wails and screams — kick into high gear. Fortunately, the subs also lend the movie’s magic spells and action sequences some extra weight, which helps immerse the viewer in the supernatural smackdowns.

All of the bonus material is presented in HD and is available on the Blu-ray disc.

The Sorcerer’s Occultist — Understanding John Constantine: (13:38) This featurette offers a relatively extensive breakdown of the John Constantine character, who is described as a blue collar, relatable magician. (He’s also considered one of most flawed heroes on DC’s roster.) The examination of Constantine extends beyond comic book pages; real-life occult expert Jason Louv chimes in to describe the role spirituality plays in today’s world.

Constantine: City of Demons WonderCon Panel 2018: (20:50) The panel, moderated by writer Laura Prudom, features star Matt Ryan, City of Demons writer J.M. DeMatteis, and Peter Girardi (executive VP of Blue Ribbon Content). Even though this discussion only covers a few episodes of the TV series — the panel took place prior to City of Demons being turned into a movie — there’s still some interesting material here in terms of inspiration for the animated story. Ryan also artfully dodges a question about the challenges of doing voice acting for some of the raunchier moments.

You know how people have given DC/Warner Bros. a fair amount of crap for the oppressively dark tone they decided to adopt for all their big screen superheroes? (Even when it clashed with characters like Superman and The Flash.) Well, John Constantine is the sort of character — and City of Demons is the sort of story — where that tone actually works fantastically.

More importantly, this film also has a properly wicked sense of humor and an affecting story, which combine to make it one of the stronger recent animated DC movies. (Even though City of Demons wasn’t actually meant to be a movie.)