Posted in: Disc Reviews by Brent Lorentson on October 23rd, 2018 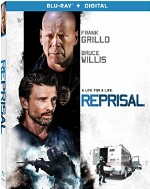 It seems there isn’t an action film Bruce Willis can say no to.  It feels as though every couple of months there is an action film that has an appearance from Willis, and frankly it’s a little disappointing.  He’s a guy who can bring in the major box office dollars, but it seems more and more of the action stars are settling for the direct-to-video route for the simple paycheck and moving on to the next.  With the number of films being churned out for the cinemas, DVD and Blu-ray, and the streaming services, it seems the film industry is simply becoming a business of quantity rather than quality due to the amount of demand needed.  Reprisal is the latest example of this demand for quantity rather than quality as we get a pedestrian action film that plays by the numbers and will be forgotten by the year’s end, and that’s a shame considering its two leads.

Frank Grillo takes the lead as Jacob, a bank manager who is living the ideal life with a wife and daughter, until his bank falls victim to a calculating bank robber.  Jacob is traumatized by the event that left a security guard dead and no suspects to be held responsible for the crime. This is where his neighbor, James (Bruce Willis) steps in to lend some comforting support and eventually is a sounding board for Jacob to work out how the robber pulled off this violent heist. It works out that James used to be an ex-cop, but for some of the logic this film uses, it wouldn’t have mattered if James was a celebrity chef; these guys play by their own set of rules.

While Jacob is on temporary leave, he and James make the most out of their time by attempting to figure out the robber’s pattern and on their own start to pinpoint clues that eventually lead to the robber’s hangout.  Rather than go to the police with what they know, Jacob instead decides to go on his own to investigate the robber and in the process follow him as he prepares for his next target an armored truck.  Why this white-collar guy seems to think he’s capable of handling this situation on his own is beyond me, but this is a movie, after all.  Where this character continues to make dumb moves is he injects himself into a firefight to help, and instead of helping the police capture the guy he takes the robbers’ stashed money…Why would you do this?  If the robber killed a loved one, I can accept him engaging in the cat-and-mouse game for revenge, but seriously, he’s a bank manager; he had to have expected at some point they’d be robbed. He clearly doesn’t have the emotional or mental restraint for the job.

But it gets better (not so much plot-wise, but the result of making stupid decisions at least deliver consequences) the robber is clearly upset his money has been stolen, and when he discovers that Jacob is responsible ,guess what he does? (Cue the game show clock countdown.) Jacob’s family gets kidnapped.  Don’t worry, there are plenty more bad decisions to follow, and somehow this bank manager becomes a gun-toting badass by film’s end, but the point is, this film is an illogical mess.

Frank Grillo does what he can with the film’s script, and he can pull off the action roles, but he can do better than this.  Bruce Willis has done enough action films where he could sleepwalk his way through it and almost make it work.  The biggest bummer is seeing these two together and it falling so flat.  This would be an awesome duo for bigger action romp; they are a combo director Tony Scott could have had cinematic gold with.

Reprisal is presented in the aspect ratio 1.85:1.  The 1080p image is arrived at with an AVC MPEG-4 codec at an average of 21 mbps.  This is a low-budget film, and the quality shows.  The image is desaturated to the point colors have no chance to pop with the exception of blue that we see in Grillo’s wardrobe.  There is a lack of tone separation in the blacks and a slight amount of noise.  I’m guessing the look is a style choice, but I’m not a fan of it.

The Master Audio 5.1 DTS track is an aggressive track with a score that comes on a bit strong, especially during the films action sequences.  As for the gunfire and FX during these action sequences, the surround is definitely utilized for a more immersive experience.  The dialog is clear throughout, though there is a montage where dialog cuts in and out over the music. It would have played better with simply no dialog.

Making of Reprisal: (9:29) Pretty much your standard making-of feature.

Interviews with cast and crew: (26:27) Here you can select which interview you want to watch or simply hit the play-all.  Bruce Willis isn’t a part of these interviews.

While this isn’t the worst action film I’ve seen, it simply does little in the way to excite the viewer and at times is even boring.  It’s only 89 minutes; this should be a mean, lean action romp, but instead it’s a bit of a clunker.  It’s still fun seeing Grillo and Willis together, and it works well as a late night movie to have on while doing laundry or just background noise.

Brent Lorentson is a horror writer and film critic based out of Tampa, Florida. With a BA in Digital Film, he co-wrote and co-directed Scavenger Hunt. His short stories have appeared in various horror anthologies. In 2019 his short script Fertile Blood will be a part of the anthology horror film Slumber Party. He is currently working on his first novel A Dark and Secret Place set to be released in late 2019. Favorite Films: Taxi Driver, Fight Club, I Saw the Devil, The Wild Bunch, Dawn of the Dead, A Clockwork Orange, Pulp Fiction, Heathers, The Monster Squad, and High Fidelity.
“31 Nights Of Terror” Contest: Win Abbott and Costello Meet Frankenstein On Blu-ray Tuesday Round Up: October 23, 2018