Posted in: Disc Reviews by Gino Sassani on November 8th, 2018 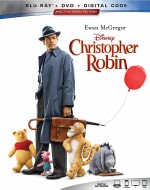 “If anyone wants to clap, now is the time to do it.”

If he were alive today, A.A. Milne would likely find a reason to smile these days. Perhaps he is. Winnie the Pooh has made quite a bit of a comeback in recent years. Last year we saw the impact the creation had on his son, the real Christopher Robin, in the sentimental Goodbye, Christopher Robin. This year Disney continues its recent trend of bringing many of its classical animated features back for live-action remakes using the wonderful world of computer-generated f/x and motion capture performances. The recent Jungle Book release was a wonder to behold and one of the best films of that year. This year it’s the world of Winnie the Pooh, and to help celebrate the 50th anniversary of Winnie the Pooh and the Blustery Day, Disney releases Christopher Robin, and you’re not going to want to miss it. All of your favorite characters from both the classic books and the Disney cartoons are back, and it couldn’t have been a moment too soon.

The film begins with young Christopher Robin having one last celebration with his friends of the 100 Acre Wood. The boy is going off to boarding school, and he will no longer get to visit his friends. It’s a sad day. This bittersweet gathering is followed by a montage of the milestone moments in the boy’s life as he grows older. We witness his action in WWI and meeting his wife for the first time. We jump ahead several years, and now he has a daughter who is about the age he was when the Winnie the Pooh craze began. He’s working as an efficiency expert for a luggage company and rarely has time for his wife and daughter. Now he must renege on a promised weekend holiday on the grounds where he played as a kid because his boss needs him to cut costs or the company will fire staff. Of course, it’s obvious that this is not the first time he’s broken such promises. His wife didn’t even bother to pack his suitcase. It appears that adult Christopher Robin is in crisis, but he’s not alone.

In the 100 Acre Wood, Pooh has awakened to a very dreary day. He can’t find his friends, and he’s worried about what might have become of them all. He does the only thing a simple bear could think up. He goes through the door in the old oak tree where he used to see Christopher Robin enter many times. Surely, Christopher Robin will know what to do. No one is more surprised to see the silly old bear than Christopher Robin. From here the two characters find that they can rescue each other, but it won’t be easy.

Disney does a very clever thing with this live-action film. Instead of bringing the cartoon characters to life, the CG characters are a bit of a hybrid between the Disney versions and the rough stuffed animals that once actually belonged to Christopher Robin and inspired the books. It’s a way to honor both rich histories, and it’s absolutely perfect. Some of the animals actually look more like realistic creatures, particularly Owl. Disney was also fortunate enough to get Jim Cummings to voice Pooh one last time. Cummings replaced Sterling Holloway after the first feature film and has been the voice of Pooh for 40 years. Cummings also voices Tigger, whom he has also voiced for years after Paul Winchell’s original efforts. So those two characters ring particularly true. All of the other original voices are gone now, but the voice cast comes pretty close on most of the characters. Everybody Loves Raymond’s Brad Garrett does a wonderful job of bringing out Eeyore’s mournful voice. Doctor Who’s Peter Capaldi supplies the voice of Rabbit. Nick Mohammed is fair as Piglet. Sara Sheen becomes the first girl to voice Roo, and Sophie Okonedo is Kanga. Finally Toby Jones has pretty limited time as Owl. All in all I’d say that the spirit of most of these characters remains true.

The music from the animated feature is teased, mostly as piano interludes. That music was, of course, originally written by the iconic Sherman Brothers, who contributed most of the timeless Disney songs of the era. Surviving brother Richard Sherman created a few more pieces specifically for this film and appears in a silly stinker at the beginning of the credits. I’m a huge fan of those guys, and it was fitting that he have a place in this film as much as Jim Cummings. The 90-year-old songwriter deserves a bow.

The actors appearing in the film as humans aren’t so bad themselves. Ewan McGregor does a wonderful job of playing the adult Christopher Robin, who is forced to look at his life and priorities. There’s a decided change that comes over the character from the serious worker to an embarrassed man when confronted with Pooh for the first time. Finally he gets to reignite the spirit of the young boy before the film ends. Agent Carter’s Hayley Atwell is somewhat underused as Christopher Robin’s wife Evelyn. Young Bronte Carmichael plays their daughter Madeline, who appears to be having a marvelous time in her father’s childhood.

Certainly, there are aspects of the film that are just silly hijinks. There’s a rather madcap journey through London where Madeline and the gang have slipped inside a trunk in the back of a truck to get her father’s papers to him before he’s eaten by Woozles for breakfast. There are the obligatory sentimental family scenes, but the real magic is found in these computer creations that somehow convey the kind of emotion that really gets to you. If you have any fond memories for these characters at all, you are going to be captivated.

Christopher Robin is presented in its original aspect ratio of 2.39:1. The 1080p image is arrived at with an AVC MPEG-4 codec at quite consistent bitrate of 35 mbps. It’s all quite a natural look for what is a pretty fantastical story. Colors are pretty much reference with little signs of color correction or temperature manipulation. As you might expect, red is the color that really pops and stands out from the rest, whether it be a bright red balloon, Pooh’s trademark red shirt, or the traditional double-decker buses of London. There’s some nice texture here brought to you by the unique blend of f/x. The stuffed animal textures look quite realistic down to the wear patterns on the fabric. The eyes stand out on these creations, particularly the bright greenish blue of Tigger’s eyes. Black levels are fair but seldom called for to deliver. Lighting is rather soft, which lends itself from the time period the film is set within.

The DTS-HD Master Audio 7.1 is obviously there primarily to service the dialog. The voice cast is exceptional, and you get to appreciate it all that much more here. There aren’t any real heavy subs at play here, and there’s certainly not much call for any of that. The score is intentionally rather subdued, providing more atmosphere than melody. The surrounds give us things like birds and wind rustling through the trees when we’re in the 100 Acre Wood and the sounds of traffic and crowds in the streets of London. The end of the film provides some manic moments where the expanded surround allows you to fully participate in the humorous mayhem.

A Movie Made For Pooh: (5:28) Like all of these bonus features, this one is brief and very promotional in its presentation. We get a few of those quotable bits from the cast and crew along with film clips and a little peek behind the scenes.

Pooh And Walt Become Friends: (2:43) This feature is narrated and presented in the style of a trailer, but instead of clips of the film, it quickly tells us how Walt was introduced to the Pooh stories by his daughter.

Pooh And Friends Come To Life: (3:16) Actress Bronte Carmichael narrates this quick look at the various methods used to bring the characters to life. It’s a nice mix of puppets, computer animation, and even a little motion capture that combines to make these beloved stuffed animals come to life.

Gino Sassani is a member of the Southeastern Film Critic's Association (SEFCA). He is a film and television critic based in Tampa, Florida. He's also the Senior Editor here at Upcomingdiscs. Gino started reviewing films in the early 1990's as a segment of his local television show Focus. He's an award-winning recording artist for Omega Records. Gino is currently working on his 8th album Merchants & Mercenaries. Gino took over Upcomingdiscs Dec 1, 2008. He works out of a home theater he calls The Reel World. Favorite films: The Godfather, The Godfather Part II, The Body Snatcher (Val Lewton film with Karloff and Lugosi, not the pod people film), Unforgiven, Gladiator, The Lion King, Jaws, Son Of Frankenstein, The Good, The Bad And The Ugly, and Monsters, Inc.
Blood, Sweat and Terrors Can You Ever Forgive Me