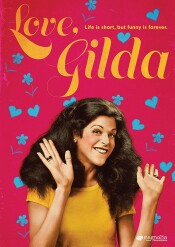 “This is Gilda Radner…her voice and her writing.”

Since its debut in 1975, Saturday Night Live has churned out more comedy superstars than you can count. However, the first performer that SNL creator Lorne Michaels cast for the show wasn’t Chevy Chase or even John Belushi. It was Gilda Radner, the daring and vivacious comic who became a breakout star on the show…and passed away much too soon in 1989. So while Love, Gilda is certainly a love letter to the late comedy legend, the documentary is at its best when it relies on Radner’s own musings to tell her story.

“I would use comedy to be in control of my situation.”

Love, Gilda actually turns out to be a pretty straightforward Radner biopic. (The fact that Radner died at such a young age, means this documentary clocks in at a brisk 86 minutes.) The film unearths home video footage of Radner’s childhood in Detroit during her 1950s and follows her comedy career in the 1970s with Second City in Toronto and the National Lampoon Radio Hour in New York City before joining the original SNL cast. We get some cool behind-the-scenes clips of Radner making her acting debut in a Canadian production of Godspell — alongside future stars Martin Short, Paul Shaffer, and Eugene Levy — and earning the respect of comedy titans like Belushi and Bill Murray during National Lampoon recording sessions.

Naturally, a hefty section of the film is devoted to her days on SNL. Radner was the first person to say the word “bitch” on TV, and she got away with it because she did it in the guise of sweet old Emily Litella. (Thanks to Love, Gilda, we learn that the character was inspired by Dilly, an elderly woman who played a big part in helping raise Radner.) Her most famous character — Roseanne Roseannadanna — was basically born out of an ill-fitting wig. But my favorite SNL clip in this documentary is Radner’s loose-limbed portrayal of Howdy Doody’s late wife Debbie Doody. The sketch was bombing until Radner won the audience over with her force of personality.

“I made them laugh before they hurt me.”

Since Radner is obviously not around to speak for herself, the movie assembles an impressive roster of her comedy contemporaries (Short, Chase, Laraine Newman) along with performers who were heavily influenced by Radner (Melissa McCarthy, Bill Hader, Maya Rudolph, and Amy Poehler, who straight up admits to swiping much of Radner’s comedic persona). The most amusing bits involve Radner’s love life: the late comic was not shy about dating the men she worked with, including the three main stars of Ghostbusters. (Murray, Dan Aykroyd and Harold Ramis.) Short has the most interesting insight, however, when he points out that it never occurred to him that someone as lively as Radner could experience depression. The late section in the film chronicling her May/December romance with Gene Wilder is sweet, but a bit short…that feels like it could be its own documentary.

The movie is most effective when it highlights Radner’s own personal diaries and letters, which reveal a sensitive and insightful artist at work. Radner most enjoyed the part of comedy/acting that allowed her to be a different person, which is why she didn’t totally enjoy her post-SNL one-woman-show on Broadway. Then again, that sort of bittersweet insight isn’t really what Love, Gilda is about; the emphasis here is placed squarely on the “Love” portion of its title.

As a result, this is a very loving and entertaining tribute that stops well short of being a great documentary or great storytelling. I was only 7 years old when Radner passed, and other than old SNL episodes the comic didn’t leave behind a body of work that is easily accessible. (John Belushi died much too soon as well, but he also managed to star in at least two bona fide comedy classics in Animal House and The Blues Brothers.) So I enjoyed learning more about Gilda Radner than I did before and hearing some of the reasons people still Love her.