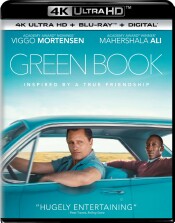 Howdy Partners. It’s Gino down on the Upcoming ranch and do we ever have a busy week ahead of us. We’ve hit the slow time for releases but it seems like all of the studios want to stampede on this week’s round-up. The other studios are certainly envious of Universal’s Best Picture winning Green Book and it’s coming out on UHD Blu-ray/4K. It was my SEFCA choice for Best Picture and even if my fellow critics went another path I still say this is the very best film from 2018. Now you get to see it in all its 4K glory. Let’s just not mention any of this to Spike Lee, okay? Okay. Universal also remains in the driver’s seat for Mortal Engines on UHD Blu-ray/4K. Lionsgate takes us back in time once again for the 11th season of Ancient Aliens on DVD and then they jump to the future with A.I. Rising also out on DVD this week. Lionsgate also let’s it go down to The Last Man on Blu-ray. Eagle Rock goes across the pond to deliver Foreigner Live At The Rainbow ’78 on Blu-ray. It’s a trip back in time for the iconic band’s tour after their first album hit the charts. Warner Brothers commits Fantastic Beasts: The Crimes Of The Grindelwald to UHD Blu-ray 4K. TNT boards The Last Ship: The Final Season on DVD. Film Movement goes Over The Limit on DVD and seduces us with Marquise on Blu-ray. Fox also goes across the pond for London Fields out on DVD.

Gino Sassani is a member of the Southeastern Film Critic's Association (SEFCA). He is a film and television critic based in Tampa, Florida. He's also the Senior Editor here at Upcomingdiscs. Gino started reviewing films in the early 1990's as a segment of his local television show Focus. He's an award-winning recording artist for Omega Records. Gino is currently working on his 8th album Merchants & Mercenaries. Gino took over Upcomingdiscs Dec 1, 2008. He works out of a home theater he calls The Reel World. Favorite films: The Godfather, The Godfather Part II, The Body Snatcher (Val Lewton film with Karloff and Lugosi, not the pod people film), Unforgiven, Gladiator, The Lion King, Jaws, Son Of Frankenstein, The Good, The Bad And The Ugly, and Monsters, Inc.
Captain Marvel Exclusive Interview With Patrick Kilpatrick, Actor & Author Of Dying for a Living: Sins & Confessions of a Hollywood Villain & Libertine Patriot