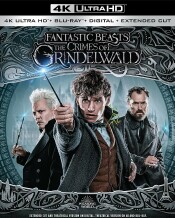 “The wizarding and non-wizarding worlds have been at peace for over a century. Grindelwald wants to see that peace destroyed.”

Back in the early days of the internet before videos went “viral”, there was a Thanksgiving cartoon about a chef who needed to serve too many people with a small turkey. So to compensate, he kept stuffing that sucker until it eventually exploded. Watching the latest entry in the J.K. Rowling Wizarding World, I was very much reminded of that early video. There’s an attempt to make the running time a bit leaner than we’ve typically seen with these films. It’s just barely over two hours, making it one of the shortest running times in the series when you include the Harry Potter films. But it doesn’t appear as if there was an accompanying cut of “stuff” going on. Rowling and director David Yates have crammed so much into the film that it gets very difficult to really keep up with it all. I left with a feeling that I had been overwhelmed. It’s a semester college course in three days. Of course it’s loaded down with exciting visuals and larger-than-life characters that have become a staple in the franchise and have incidentally made Rowling the richest woman on the entire planet. She’ll add a few shekels to the bank account, to be sure. The film will score huge with the box office take. But it serves little else but to set up a game board. Its purpose is to identify the players and which side of the good vs. evil battle they will be playing for. It might just be the most expensive trailer ever filmed. But it’s one people will pay hundreds of millions to have a chance to see. Fantastic Beasts: Crimes of the Gindelwald is a Thanksgiving feast of truly monstrous proportions.

Johnny Depp finally gets to show off as the titular villain Grindelwald. He has been in prison, but we knew that those pesky dungeon walls weren’t going to hold him. You did know that, yeah? He makes his fantastic escape and goes forth to recruit followers. His story ends in this film with a gathering where the good guys think they have him trapped, but where he makes his big recruitment pitch. The film essentially ends with the players picking the side they intend to fight on.

Of course, there is so much more going on than that. We finally get back to Hogwarts, where a young Albus Dumbledore is played by Jude Law. It turns out that he can’t actually take on Grindelwald because of a magical oath that they share. It has been hinted from the start that the two shared a rather close relationship, and the edges of that are explored here. Our Hogwarts excursion also includes a trip back in time where Dumbledore was the Professor of the Dark Arts for young Newt Scamander (Redmayne). Dumbledore obviously sees something in the young man, and just as he would with young Harry in later years, he knows that Newt will have a big role in the conflict to come.

Unfortunately, Eddie Redmayne can’t pull off the burden of this film in quite the way he could in the first. In the first film we were all caught up in his creatures and his desire to save them. The creatures make some delightful appearances again, but the character doesn’t appear to be up to the flurry of heavier story material that loads this film entirely too much. The whimsical performance makes him seem rather awkward and out of place when things start to get serious. I loved the character in that film, but he is lost to me here. There appears to be little connection between that world and this one.

There are so many other stories and characters going on that it’s easy to get a little lost here, and I can’t help the feeling that that was somewhat what Rowling intends for this movie. This overload can’t be an accident. She’s obviously a far more clever writer than to bog us down here by happenstance. So it’s deliberate. But why? Perhaps these films are really be made for box office take now. All of this material will require so many films to unravel, and a cool billion a throw isn’t a bad day’s work, is it?

Fantastic Beasts: Crimes Of The Gindelwald is presented in an aspect ratio of 2.40:1. The ultra-high-definition 2160p  image is arrived at by an HEVC codec with an impressive average bitrate of 65 mbps. This is certainly a visually stunning film. There is also a lot of atmosphere that works to make this fit inside Rowling’s Wizarding World that began with Harry Potter. If you discover an extra level of detail and texture, you can chalk it up to a choice to film this entry at a remarkable 6K. It’s digital, but shooting above 2-3K is rare with today’s digital movies, and a lot of the reason is the f/x. And trust me, atmosphere is everything here. These films all have a decidedly gray/dark tone that can do a lot to hurt those details and rich textures. Here you get that bleak styling without sacrificing any of the other elements of the image presentation. Because this is also a period piece, there are some unique costumes and environmental texturing that is uniquely the Wizarding World. Shadow definition is crucial, and the HDR chips in to give us remarkable blacks with surprisingly high shadow definition. For the most part the f/x blend in rather seamlessly, and it’s the incredible beasts that provide the most color pop for your buck. The tiny green creature that Newt carries about with him looks stunningly vivid against the dark textured background of his jacket pocket. The only place this somewhat falls apart is the opening escape scene. It’s a maniacal pace, and the images tend to blur a bit. With an almost monochromatic tone I found myself unable to really take in the details here, and it blurs away some of the thrill of the chase. The blue plasma fire in the climax has some intense moments, particularly when the blue plasma dragon tussles with the bright red plasma of the “good” guys. It’s a dazzling climax visually.

The Atmos track defaults to a pretty solid 7.1 mix. There is so much going on here that the audio presentation works hand-in-hand to keep you immersed in the often frantic moments of the film. The James Newton Howard score blends nicely with the familiar Potter musical themes, and the return to Hogwarts with its memorable theme is one of the more emotionally charged beats in the film. Dialog manages to always cut through with nice placement precision. The surrounds continually feed you the bustle of a magic circus or the sizzle of a wizard confrontation. The subs are ever-present to fill everything from the dialog to the explosive encounters that often dominate the soundscape. Credit the sound designers for allowing those quiet character moments which help to counter the pace of all of this action. The various creature sounds add life to computer-generated images, and the mix will use all of this 7.1 surround presentation to immerse you fully into this familiar world.

J. K. Rowling – A World Revealed: (10:15) Rowling talks about leaving Harry behind and the transitions from that to Beasts both for her career and personally in her life. Others join in to accent various points and there are clips from both the Beasts and Potter films to make her points. We see some development clips and behind-the-scenes footage that usually shows Rowling involved in the many aspects of production.

Wizards On Screen – Fans In Real Life: (19:22) Evanna Lynch, who played Luna Lovegood in some of the Potter films, was chosen from among fans being courted for the part. She was a fan before she participated in the movies. The same appears to be true of Ezra Miller, who plays the pivotal role of Credence Barebone in this movie. The two gather to watch a few scenes of this movie and kind of provide a geeked-out commentary as they watch.

Distinctly Dumbledore: (9:31) Rowling and others talk about the challenges to casting the younger version of a character with so much fan devotion. Jude Law apparently looked into at least some part after watching the first Beasts film. We get some early concept ideas for the young Dumbledore, from costume to facial hair.

Unlocking Scene Secrets: (49:09) This is a rather clever and unique way of presenting the usual behind-the-scenes production features. There are six specific scenes which are used as springboards for these various areas from the art department to f/x. You don’t really watch a complete scene, but rather aspects of it are used to move along the conversation. There are six with a handy play-all option.

It’s nothing more than magic in a true sense of the word. It’s enough to entertain. The film leads us to its rather dire warning that “The time is coming when you’ll have to pick a side.”

Gino Sassani is a member of the Southeastern Film Critic's Association (SEFCA). He is a film and television critic based in Tampa, Florida. He's also the Senior Editor here at Upcomingdiscs. Gino started reviewing films in the early 1990's as a segment of his local television show Focus. He's an award-winning recording artist for Omega Records. Gino is currently working on his 8th album Merchants & Mercenaries. Gino took over Upcomingdiscs Dec 1, 2008. He works out of a home theater he calls The Reel World. Favorite films: The Godfather, The Godfather Part II, The Body Snatcher (Val Lewton film with Karloff and Lugosi, not the pod people film), Unforgiven, Gladiator, The Lion King, Jaws, Son Of Frankenstein, The Good, The Bad And The Ugly, and Monsters, Inc.
Instant Family (Blu-ray) Green Book (UHD Blu-ray) (4K)