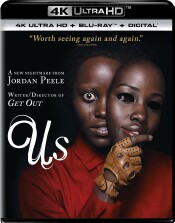 “There are thousands of miles of tunnels beneath the continental United States. Abandoned subway systems, unused routes and deserted mine shafts. Many have no known purpose at all.”

A very creepy, violent, and disturbing film, Us, enters theaters, and it’s probably going to be there for some time. Not only is the plot haunting and filled with terror; the acting that makes it work is superb under the guidance of Jordan Peele who gave us the film Get Out.  Adding more to the potentially Oscar-worthy film is the dank and fear-inducing cinematography with a soundtrack to match. If you like your horror nonstop, then Us is for you.

Young Adelaide (Madison Curry) is having a fun time at the seaside amusement park of Santa Cruz, California with her father and mother.  The night is getting her a bit weary, but she’s still hanging in there, as her father seems to be having the time of his life with the carnival games.  Before her mother seeks out a restroom, she tells her husband to keep an eye on Adelaide.  When he gets challenged by another guy in a game of Wack-a Mole, Adelaide wanders off and walks into a side show called Merlin’s Forest.  Like in a house of mirrors, the maze gets her confused, but as luck would have it, she comes to a clearing where she meets a girl her age with her same likeness.

Flash forward 20 years, and we find Adelaide (Lupita Nyong’o) is married to Gabe Wilson (Winston Duke) and has two children, Jason (Evan Alex) and Zora (Shahadi Wright Joseph), who are on a trip to Santa Cruz.  They are going to meet up with best friends Josh (Tim Heidecker), Kitty Tyler (Elisabeth Moss), and their teenage daughters, Becca (Cali Sheldon) and Lindsey (Noelle Sheldon). Tired from all the exercise at the beach, they return to their rental cottage and are about to turn in for the night when Jason tells them that some people are in their driveway.

Gabe tries to warn the strangers dressed in all red that they must go away, but they won’t move.  Director and writer of Us, Jordan Peele, provides the very strange opening and from that point on never stops the carnage in this daunting tale of doppelgangers versus the human race. The film plays out mostly at night, so it gets very spooky and jumpy as the dark closes in on the players.  He uses some very good mood-enhancing music, much like Peele’s movie Get Out, that threads its way throughout the film. It gives a feel of pending doom at times, but often just scares the living daylights out of you.

With low-light shots of the nighttime scenes, he’s able to provide those jumpy instances that come at you from nowhere. But what makes those terror thrills work are the actors who portray the odd-looking and weird doppelgangers that are hell-bent on deleting their doubles so they can take over the world. Add to this gobs of bloody makeup, special effects, and shot-for-shot lookalikes, and if fear hasn’t set in, you have seen way too many horror flicks.

Speaking of acting, Lupita Nyong’o pulls off one of the best frenzied-woman roles that equals, if not betters, Halle Barry in the movie Kidnap. And in Us, Lupita has to play it out against herself. Once she gets into the defense and then vengeance rage, there’s no stopping this woman from trying to save her children.  It makes the movie work, taking it up a notch when it really needed it.

In the role of Jason, the youngest of the Wilsons, Evan Alex works his characters from two sides, good and evil.  He’s the boy who hides behind a Halloween mask to avoid conversations with his mother and then the evil double of himself. It’s his role as Pluto, who thinks he’s found a way to kill Jason’s family for the good of his doppelganger sub-humans. This is his first full length feature, and he nails his character(s).

Us is presented in an aspect ratio of 2.39:1. The ultra-high-definition 2160p  image is arrived at by an HEVC codec with an impressive average bitrate of 65-70 mbps. This isn’t as strong of an upgrade as I expected. There’s a bit of confusing pieces here. The film was shot at a closer-to-4K resolution of 3.3K. The problem is that it was then mastered at 2K. I’m not sure why the change, but it makes for a less dramatic upgrade from Blu-ray to UHD. Most of this takes place in the dark, so the strong black levels are a huge advantage. The HDR allows for some better contrast, but there isn’t the kind of shadow definition you might be hoping for. A notable exception happens on the lake when the two fathers are fighting. Perhaps it’s the reflective quality of the water, but there is much better definition here in the darkness. The red clothes don’t stand out, and you only have the addition of a little better fabric texture here.

The Atmos track defaults to a pretty good 7.1 mix. The audio presentation is quite immersive. There are several key moments where directional sound is actually important to the storytelling and allows you to come along for the ride. When the girl wonders away in the film’s early moments the sounds of the boardwalk are brilliantly placed to give us both a sense of direction and distance. The subs come alive once the film enters its confrontation stage. There are the expected jump moments, but the bottom adds some nice substance to the action. Dialog cuts through fine. Yeah, I find the doppelganger speech more than a little irritating, but I suppose that’s the point.

The Monsters Within Us (4:45): This brief feature introduces us to the main characters and their “duplicates” and takes us behind the scenes to see how the tricks were done.

Tethered Together: Making Us Twice (7:29): The cast provide insight into the challenges of filming many scenes twice.

Redefining a Genre: Jordan Peele’s Brand of Horror (5:31): This one is a more focused look at Jordan Peele, who talks about his influences and his particular brand of horror.

The Duality of Us (9:56): Apparently Jordan Peele is afraid of the whole doppelganger idea. He reveals those fears here.

Becoming Red (4:09): Watch as Lupita Nyong’o gets into her character on the set between the takes.

Scene Explorations: Three of the film’s scenes get a breakdown from the cast and crew.

Deleted Scenes (6:28): There are six with no individual play option.

A very good terror flick for the horror fans or those who just want a good scare.

John Delia has been on all sides of the movie business from publicity, writing for publications and on line blogs, script writing, to film making. Writer, critic, film editor he has worked as a film critic on this second go around for 14 years. He earned his Bachelor’s degree at the college of Journalism and Communications at the University of Florida in Gainesville, Florida. John is an active member of the Southeastern Film Critics Association (SEFCA) . Favorite Films: Lord of the Rings/Hobbit trilogies, The Godfather trilogy, the Indiana Jones trilogy (I didn't like the 4th), The Avengers and for TV it's Game of Thrones. As for animation it's a tie between anything Pixar and everything Hayao Miyazaki.
Swingtown: The First Season The Haunting Of Sharon Tate (Blu-ray)