The Haunting Of Sharon Tate (Blu-ray)

Posted in: Disc Reviews by Brent Lorentson on June 21st, 2019 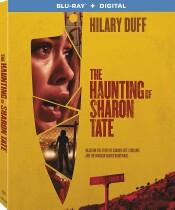 With the 50th anniversary of the murders committed by Charles Manson’s followers coming up in August, it’s no big surprise that we’re seeing films that focus on those events popping up on the big screen.  Hollywood has always had a fascination with the crimes. After all, it involved a rising starlet, Sharon Tate, and director Roman Polanski was making a name for himself in the states after the success of Rosemary’s Baby.  We all know what happened with Manson and his followers and the unfortunate fall Polanski took, despite managing to maintain a directing career long after the child rape accusations first percolated.  It’s a tragic story all around, and it’s no surprise why it continues to fascinate people.  Already there has been the film Charlie Says from Mary Harron (American Psycho), and next month we’ll be getting the long anticipated Once Upon a Time in Hollywood from Quentin Tarantino, whose film takes place around the time of the murders.  But right now, the focus is on The Haunting of Sharon Tate, a film that takes the approach that Tate had predicted her murder because of dreams she had of the massacre long before they took place.  It’s a film that poses the “what if?” question that if she had known what was going to happen, could she have changed the outcome.  It’s not a bad idea, and it opens plenty of possibilities, but how does it turn out?

First let me say I’m all for films that attempt the alternate reality direction, playing with the notion of how things could have gone.  I went into this film with an open mind and really just was hoping for something unique, something that could balance between horrific and entertaining.  Considering this IS a true story, to go for a fun, campy slasher would just be in poor taste.  Well, unfortunately, that’s sort of what this aimed to be, and it just fails miserably.

Hilary Duff plays the title role of Sharon Tate, and from the start she may somewhat look the part; it’s just that the dialog and accent are just jarring.  It’s not so much the performance I blame; it’s the script.  Everyone’s dialog just feels petty and unnatural, to a point it even makes some of the characters unlikeable.  I don’t mean that just because these were real victims they should be depicted as perfect individuals, but there just seems to be no depth given to anyone.  Then things just feel silly as Tate starts discussing spiritualism and having these New Age discussions.

Then there is how they handle Manson.  There is a point where one of Manson’s recordings plays, and a lot of focus is put here.  My issue is that they had the poor taste to use a song that is actually performed by Manson, meaning someone in the Manson estate most likely got paid for this. Sorry if my personal feelings are getting involved, but they could have done a variety of things instead of using a real track sung by the man.  Even more frustrating are the liberties this film takes with the events that took place and how they went down.

From the start of the film, it’s exploitive of the crime, showing real crime scene footage and interview footage with one of the Manson followers.  While that plays, we see a recreation of the crime scene in somewhat graphic detail.  It doesn’t help that we see the murders also depicted in various manners over the course of the film.  It’s as though this is a celebration of the murder rather than attempt to capture the human story.

I want to say I’d like this film more if it were not based on true events, but there are simply too many clichés thrown at the screen here.  When the film goes into home-invasion mode, well, I just feel it’s adding insult to injury.  Even trying to be objective and see this as a home-invasion flick, the characters all seem inept, and rather than this being about survival it feels more about the need to put blood on the screen.  Sure, exploitation films have been around for decades, but this just feels wrong, and it’s a reminder that these were real people who lost their lives.

The Haunting of Sharon Tate is presented in the aspect ratio 2.40:1.  The 1080p image is arrived at with an AVC MPEG-4 codec at an average of 25 mbps.  The film for the most part has a warm look to it, and it does help depict the LA summertime feel of the film.  There is a bit of crushing that occurs with the blacks and reds during some of the night shots and most noticeably during in Manson family invasion sequence. Unfortunately, seeing this in Blu-ray, some of the CGI blood we see is all the more obvious, and it just has a cartoonish appearance.

The DTS-HD Master Audio 5.1 track is kind of a no-frills-attached track.  The one attempt at building a creepy atmosphere with the Manson music playing falls flat and feels more exploitive than tension-building.  When the film gets to the somewhat graphic kills, this is where I wish we got less visuals and more sound.

Audio Commentary with Writer/Director Daniel Farrands:  I wanted to listen to this and hear his thoughts on the film; well, let’s just say I disagree, and I’ll leave it at that.  As for what he has to say about the making of the film and how it came together, this is actually a track that does give a lot of insight into the production, and though he’s alone on the track, he manages to keep it interesting and never boring.

Premonitions: The Haunting of Sharon Tate (14:01) Mostly this is a collection of interviews with the cast discussing the film and what brought them to it.

I wanted to like this film, but I simply came away from it not just disappointed, but angry.  Sure, you can argue the point that the film succeeded in eliciting an emotional response, but this isn’t the emotion I should be having.  There’s a fine line you have to walk when depicting a true story, and when you alter it, it becomes all the more perilous. It’s hard to remain objective with this film because of the decisions made here.

Brent Lorentson is a horror writer and film critic based out of Tampa, Florida. With a BA in Digital Film, he co-wrote and co-directed Scavenger Hunt. His short stories have appeared in various horror anthologies. In 2019 his short script Fertile Blood will be a part of the anthology horror film Slumber Party. He is currently working on his first novel A Dark and Secret Place set to be released in late 2019. Favorite Films: Taxi Driver, Fight Club, I Saw the Devil, The Wild Bunch, Dawn of the Dead, A Clockwork Orange, Pulp Fiction, Heathers, The Monster Squad, and High Fidelity.
Us (UHD Blu-ray) (4K) Toy Story 4