Posted in: Disc Reviews by Jeremy Butler on August 16th, 2019 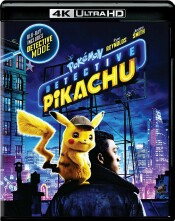 “That’s a great fifth option; let’s work on the other four.”

This line is one of the signature witty clips that Ryan Reynolds brings to the character of Pikachu in this movie adaptation of the popular Nintendo DS video game, Pokemon: Detective Pikachu. It is clear that Pokemon is standing the test of time, as I remember collecting and playing the cards in my youth. Though the card game appears to have fallen out of favor, the franchise received a resurgence a few years ago with the emergence of popular mobile phone app, Pokemon GO! In fact, I wouldn’t be surprised of the popularity of app led to the decision for this live action film starring Ryan Reynolds, Justice Smith, and Bill Nighy. This was a solid opening in my opinion, though I am skeptical of its film franchise potential, given that those without a basic understanding of the video game or card game (there does not appear to be any connection to the original animated series or subsequent animated films besides inclusion of the Pikachu character) are unlikely to get by the questions of “What are Pokemon?” or “Where do they come from?”

There are some similarities to the video game, such as the inclusion of the Tim Goodman character, his ability to understand Pikachu, and the motivating theme of the mystery to find Tim’s missing father. Delving further into the plot, at the time of his father’s disappearance, the two are estranged following the death of Tim’s (Justice Smith) mother. Coming to town after his father’s reported death, Tim is merely there to settle his father’s affairs. While at his father’s home, he encounters his father’s Pokemon partner (in this reality, Pokemon and humans live in union), a pikachu, and immediately discovers that he can understand what the Pokemon is saying, and Pikachu can understand him in kind.

Pikachu explains that Tim’s father survived the accident, but he does not know where he is due to amnesia brought on by the crash, thereby thrusting Tim into the investigation to find his father. Meanwhile, a new drug has surfaced on the streets of Ryme City, that induces rampage fits in Pokemon. With the help of an unpaid journalism intern with a self-assured nose for a story (Kathryn Newton), the group learns that Tim’s father was caught up with investigating the source of the drug, which led him to the most powerful Pokemon in existence, Mewtwo. To find his father, Tim will have utilized his newfound ability and partner with Pikachu, all while finally coming to terms with issues of the past that he has spent most of his life avoiding.

The film is likely to resonate with fans of the card game and video game, but the potential to bring in a fresh audience is minimal, as newcomers are likely to quickly become confused by the union of humans and Pokemon, and there is never a full explanation for the purpose of this. It is briefly glossed over during video announcement as Tim enters Ryme City, but it is easily missed if you are not fully engaged. In brief explanation, union of Pokemon is really only common in Ryme City due in part to the vision of the Roger Clifford character, who has spent a lifetime spending the different species of Pokemon in hope of finding a cure for his debilitating disease. Fortunately, my cursory knowledge of Pokemon served me well, as I was able to recognize at the least the more popular Pokemon depicted, such as Charizard, Squirtle, Bulbasaur, and naturally Pikachu. However, without some kind of basic knowledge, newcomers will likely spend a good deal of time lost in the sauce.

This marks the series’ first live-action film attempt. It is also a move away from established characters like Ash Ketchum. Granted, Tim Goodman is the main character of the video game; he is a lesser known character in my opinion, which can act as both a blessing and a curse. A blessing as it allows a fresh take and opportunity to move the series in newer direction with less rigid structure requirements, but a bit of a curse as avid fans have less of a connection with this character. That said, I found the Goodman character to entertaining, and he has a good story arc. Smith portrays the character with a bit of a chip on his shoulder in the beginning, with the estrangement from his dad and his feelings towards Pokemon in general, but as the story progresses, he comes more vulnerable and builds a bond to the Pikachu character, which I found to be a more organic approach and easier to accept than if the two had a immediate connection.

Speaking of Pikachu, let’s address the elephant in the room: the big draw for the film, Ryan Reynolds providing the voice and face motion capture work for the character. If you like Reynolds as Deadpool, you will like him as Pikachu. He does not have the vulgarity that he has when he is doing our favorite Merc with a Mouth (remember this is a kids’ movie) but his signature sarcasm and tone, which I like to call Ryan Reynolds playing Ryan Reynolds, is present from the first syllable. The collaboration of the two characters is the driving force of the movie, and the film’s main source for comedy. Reynolds voicing the character just give me more reason to love Pikachu, especially listening to him emotionally recite the Pokemon theme song.

It takes some time for the story to pick up steam, as the first half is feels slow in its pacing with a lot of buildup. Things hit the ground running in the second half with a couple of twists that cause you to question morality and motivations of several characters. Some of the twists  I was able to pick up early on such as the big reveal at the film’s climax, but then there were a few that I did not see coming, like the cameo appearance of an unseen character. All in all, the film managed to keep me on my toes somewhat.

Pokemon: Detective Pikachu is presented in an aspect ratio of 2.40:1. The ultra-high-definition 2160p  image is arrived at by an HEVC codec with an impressive average bitrate of 50-55 mbps. The ultra-high-definition image presentation showcases some nice upgrades from the standard Blu-ray. The most important has to be the wonderful textures, from fur to scales, on the various creatures. The movie was actually shot on film so has a native 4K aspect, but that really only applies to the live-action and not the great amount of CG which is 2K. That’s also the resolution the film was finished in final production. HDR gives us some nice colors. The purple gaseous state of the R chemical is one of the more outstanding examples of that. The Pokemon parade that serves as the film’s climax also puts a great amount of primary colors on display. Black levels are inky and exceptionally even. You get some nice shadow definition and a boost in the contrast during battles, particularly where fire elements are present.

The Atmos track defaults to a pretty solid 7.1 mix. There’s a bit of a nice pop to the score that lives throughout the surrounds and gave a pretty interesting atmosphere throughout the film. The surrounds are used quite nicely to fill out the sound field with some of the unusual sounds of the creatures. You get the sense of the environments where these creatures are rather commonplace. Subs help out during the battle scenes and add some nice depth as our heroes are struggling with the giant forest creatures. All of this allows for some very immersive moments. Dialog is always perfectly placed and clear at all times.

My Pokémon Adventure (2:09): A brief featurette with Justice Smith describing his experience on the movie as well as giving a brief history of the origin of the series. In case short and sweet was a good thing. Justice was able to convey a lot of information, as well as his own personal experience in less than five minutes. Impressive.

Mr. Mime’s Audio Commentary (2:56): I’m sure you are wondering as I was wondering: how does a non-speaking character give audio commentary? The answer is an obvious pun, but still enjoyable.

Welcome to Ryme City (2:56): This was another good featurette that doesn’t take up a lot of time. Here we hear from the cast as well as the production designer about all the detail that went into designing the immersive city of Ryme City.

Bringing Pokémon to Life (3:19): Out of 800 species of Pokémon, only about sixty are depicted in the film. However, due to the level of detail that the animation crew put forward, I was none the wiser. There was top animation in this film, from the scales on Charzard to Pikachu’s fur. Amazing detail.

Action! (4:19): Curious how they did the torterra scene? Wondering if the cast did their own stunts? The answer is yes, they did for the most part, with the exception of Ryan Reynolds for obvious reasons.

Color Characters (6:44): As the first live action Pokémon movie, it was important to have the right crop of characters. In this featurette, the characters are described by the people who possibly know them best: the actors that played them.

Uncovering the magic (4:00): This featurette is more of a rehash of things covered in the other extras such as the film style. It’s a bit redundant.

Outside the Actors Studio (1:30): This is by far one of my favorite extras as Ryan Reynolds talks about how immersed he gets with the characters he plays. It makes me feel bad for his kids. It also has a funny cameo featuring Blake Lively.

Carry on Music Video (3:47): Every movie needs a companion song. I figured that Catch Em All was this film’s, but this Rita Ora-led song isn’t bad either.

Detective Mode: Now this hands down was the best extra as it provided new experience to the film. Think of it as visual commentary, as you will be treated to behind-the-scenes footage and character stats about your favorite Pokémon as well as Easter eggs.

My daughter is requesting to see this movie, and in this case, I have no issue complying, even though it means seeing it again. She’s seven, and I think that although some of the more subtle comedy will go over her head, I have no doubt that she will get enough out of the film to enjoy it. Age-wise, the film is more ten years old +, in my opinion, but it’s a family-oriented film and a worthwhile adventure for the entire clan.

Jeremy Butler is a film school graduate of the International Academy of Design and Technology. He is been writing for Upcomingdiscs since 2012; however, movies have played a big part of his life for much longer. Favorite genres include horror, science fiction/fantasy, and comedy. Favorite movies are V for Vendetta, Boondocks Saints, Kiss Kiss Bang Bang, and The Godfather.
Major League (Blu-Ray) Contest: Win The Avengers: Endgame On Blu-ray From Marvel/Disney