Posted in: Disc Reviews by Gino Sassani on October 2nd, 2019 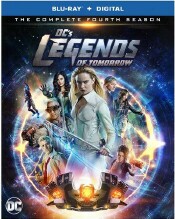 “I mean who knows what kind of creatures are out there wreaking havoc on history?”

DC’s Legends of Tomorrow has become somewhat the odd man out when it comes to the DC Television Universe, or the Arrowverse, as it is most commonly known. Last season it was not part of the annual crossover, and it aired later in the year with fewer episodes. And while it will be a part of the huge crossover coming in December, it still doesn’t appear to get the same respect as the other shows. I like the series, but it is my least favorite of the franchise. Warner Brothers Home Entertainment isn’t as high on the show either. They crammed extra episodes on the discs so that all 16 episodes of the fourth season end up on just two discs. Ouch. It doesn’t help that every year sees a huge shake-up of the cast, and this season was no exception. The crew of the Waverider change over faster than teens at a fast food joint. Of course, you might be left asking yourself what is this Waverider of which you speak? It’s hard enough to keep track of the players without a program, but it’s a near impossible feat if you are trying to join the festivities in the fourth season. You might want to check out our reviews of the previous years and then rejoin me for the breakdown of the Blu-ray release of DC Legends Of Tomorrow Season 4. Just bang it here to catch up: Legends Of Tomorrow Reviews.

When season three ended, the Legends managed to beat the bad guy by opening up a rift. What they didn’t quite know at the time was that while their big bad went away, a collection of magical creatures made their way to this side of the rift and are now scattered throughout history. Now the crew must track them all down. At first they were sending them to Hell in portals created by John Constantine (Ryan). At some point their consciences got the best of them, and they started to collect them at a secure rooms at the Time Bureau. The problem with that idea is that it leaves open the possibility that this group of magical creatures could be used for nepharious purposes, and wouldn’t you know it, they are.

The crew changes this season. Firestorm is gone, and that means saying goodbye to both Franz Drameh as Jackson and Victor Garber as Professor Stein. Rip Hunter is also once again gone, and that leaves Caity Lotz’s Sara Lance back in command of The Waverider. Amaya is also gone, but we don’t have to say goodbye to actress Maisie Richardson-Sellers. She returns as a brand new character courtesy of the magical beasts that feature in this season’s episodes. The crew track a shapeshifter to 1980’s England who is using the face of Queen Elisabeth to promote a punk rock band. When the Legends encounter the creature they decide not to send “her” to Hell, but rather start the capture program. The shifter last used Amaya’s appearance to get that sympathy and becomes trapped in that form. Same actress but an entirely new attitude. Eventually she regains her shifting abilities but keeps the same form because it has become familiar to the crew of which she becomes a part.

Also remaining in the crew is former Flash rogue Mick Rory, played by Dominic Purcell, and Ray Palmer, aka The Atom, played by Brandon Routh. Nick Zano also returns as Nate, who gets to have a much more juicy role this season. We meet his father, who happens to be a powerful person in the Department of Defense and holds the purse strings for the Time Bureau. The cool part about this is that he’s played by none other than Thomas F. Wilson, better known to movie fans as Biff Tanner from the Back To The Future movies. He crosses the line between good guy and bad guy here, and the references to his Biff character are legion. And who hasn’t always wanted to see Biff sing Sweet Baby James? The character and actor are the highpoint of the season.

“I’m merely offering my services as a consultant, and as such I have some stipulations. I don’t do silly costumes. I expect full benefits. And I require no less than two weeks paid vacation.”

Coming onboard fulltime is Matt Ryan as John Constantine. One of the nice trends in the Arrowverse is that the showrunners are often bringing back earlier television versions of the characters from the 1990’s Flash series to the addition of characters/actors from Smallville, Birds Of Prey, Wonder Woman  and the 1960’s Batman in the coming huge crossover event. For this season they’ve brought the version of John Constantine who aired for a short season a few years ago. He has been a recurring character in previous seasons, but he’s full-time now. He’s brought on to create the magic to, at first, send the creatures to Hell, and throughout to use his magic skills to help the group fight the big bad, who won’t be revealed until the last handful of episodes.

One of the advantages of this show and what keeps it floating even with the lower ratings is the appeal of the time travel stories. This year they really did jump the shark. We go back to 1969 and Woodstock, where a unicorn is tearing the hearts out of unsuspecting flower children. To kill it, they have to get items from Jimi Hendrix, Jerry Garcia and Janis Joplin. The unicorn discharges a slime that acts like hallucinogen and sends many of our crew on a “trip”. In Salem they encounter a fairy godmother who has all of the Disney qualities only darker, including breaking out in song. She becomes a big part of the story in later episodes. There are some rather good episodes, but when things get serious I just couldn’t get there with the rest of them, and I found the season to be too silly.

Two other characters who get dominate time happen to be Jess Macallan who plays Ava, the head of The Time Bureau and the love interest for Sara. Gary, played by Adam Tsekhman, is nothing short of a farce, particularly when he turns evil and sports a magical nipple. Don’t ask, and I won’t tell.

Each episode is presented in its original broadcast aspect ratio of 1.78:1. The 1080p image is arrived at with an AVC MPEG-4 codec. This high-definition image presentation suffers from Warner’s decision to put 16 episodes plus features on just two discs. There’s a lot of nice production design that suffers from compression artifact and shimmer. There’s no place for that on a Blu-ray release. It’s twice the number of episodes that should be here, and I strongly urge Warner Brothers to reconsider this cheap alternative to doing it right.

Post Production Theater: (5:06) A look at crew inserts that serve as placeholders for pickup shots.

Legendary Storytelling: (3:16) A look at character and period scenes.

Legends of Tomorrow might have been left out of the crossover this last season, but the finale certainly plays into the event for this coming December event. This season things will shift for the entire Arrowverse. Arrow is ending, but there will be a spin-off with the future characters from last season. Batwoman takes over a new slot, and there are going to be major changes in each of these shows before this current season ends. “There’s a new sheriff in town.”

Gino Sassani is a member of the Southeastern Film Critic's Association (SEFCA). He is a film and television critic based in Tampa, Florida. He's also the Senior Editor here at Upcomingdiscs. Gino started reviewing films in the early 1990's as a segment of his local television show Focus. He's an award-winning recording artist for Omega Records. Gino is currently working on his 8th album Merchants & Mercenaries. Gino took over Upcomingdiscs Dec 1, 2008. He works out of a home theater he calls The Reel World. Favorite films: The Godfather, The Godfather Part II, The Body Snatcher (Val Lewton film with Karloff and Lugosi, not the pod people film), Unforgiven, Gladiator, The Lion King, Jaws, Son Of Frankenstein, The Good, The Bad And The Ugly, and Monsters, Inc.
Billions: Season Four “31 Nights Of Terror” Contest: Win The Last Ship: The Complete Fifth & Final Season From TNT