Posted in: Disc Reviews by Jeremy Butler on October 16th, 2019 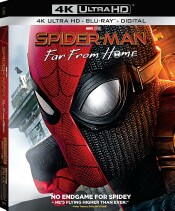 “It’s easy to fool people when they are already fooling themselves.”

There was a lot of pressure on this film to be great, it being the first MCU film following the epic known as Endgame. This film needed to be the statement that the MCU was finished after the events of Endgame, which completely and irrevocably changed the landscape of the franchise going forward. By the way, if you have not seen Endgame yet, two things. First, what is wrong with you? You are the reason that the film hasn’t taken the all-time box office record away from Avatar yet. The film has just been re-released with additional footage, so there is even more to enjoy. So get to a theater ASAP! We need to beat Avatar! Secondly, you should probably stop reading this review immediately, as I will be discussing events that will likely leave you lost. Let the previous declaration serve as your warning disclaimer. Iron Man is gone, Captain America has laid down his shield in favor for a lifetime with the love of his life. A little selfish, but I’d say he’s earned it after his many sacrifices. The Avengers are essentially disbanded, but the world still needs heroes. Enter your friendly neighborhood Spiderman.

Following the events of Endgame, everyone who was erased by Thanos have returned to realize that five years has passed, and they have not aged. This includes Peter Parker (Tom Holland). In what is being called “The Blip,” the population is attempting to returned to their everyday lives; however, the loss of Iron Man has left a vacuum, leaving everyone wondering who will be the next Iron Man? A question that Peter Parker ends up fielding more than most people. The weight of Tony Stark’s mantle weighs heavily on the shoulders of this sixteen-year-old, who is still processing the loss of his mentor. While struggling with this ideal, Peter embarks on a European trip with his science class and has big plans for his friendship with M.J. (Zendaya).

Before Peter can even begin to enjoy his trip or enact his plan with M.J., his trip is hijacked by Nick Fury, who has a situation that requires an Avenger. It turns out Tony’s sacrifice (more specifically his snap) created a rift in the multiverse, allowing dangerous creatures known as Elementals to escape into our world and wreak havoc. Spiderman must partner with Quentin Beck, aka Mysterio (Jake Gyllenhaal), a soldier from the same dimension as the creatures to put an end to their destruction. All Peter wants to do is enjoy his vacation and tell M.J. how he feels, and now the fate of the world and lives of everyone he holds dear are in danger. Not to mention the added pressure to live up to the legend of Tony Stark. That is a lot of pressure to put on the shoulders of a friendly neighborhood hero.

One of the first things we need to talk about is the opening, which served as both a memorial tribute to those that we lost and a solid introduction into the film. The choice of song to represent our feelings regarding the loss was both comical and appropriate. The film hits the ground running, immediately providing an explanation for how the events of the previous film have affected the universe. It’s pretty straightforward and easy to comprehend. The idea that the returning erased people did not age is very plausible. Also, the public’s obsession with who will succeed Tony Stark has the Earth’s protector is very relatable and provides great tension to the film. I give great credit to Tom Holland for his range of emotion regarding this subject. His anxiety regarding about filling these very big shoes, while trying to maintain a normal life for himself, all while trying to grieve the loss of Tony, is a big part of the emotional arc of the film and gives the proper respect to Robert Downey Jr.’s impact on the franchise. Tony Stark is gone, but he is hardly forgotten.

Speaking of performances, this was an excellent introduction into the MCU for Gyllenhaal, who was quite the scene-stealer for the film. He was easily my favorite character. His mastery of the duality of his character made it impossible to hate him even when I knew I should. Diehard fans of the comics know that Mysterio is one of Spiderman’s arch-nemeses, but here he acts as a mentor for the young hero, filling the void left behind by the loss of Tony.  The chemistry between Holland and Gyllenhaal is one of the biggest draws for the film, and easily makes your wonder what will sour the relationship between the two. Another character worth mentioning is Zendaya, whose character has been bumped from basically a cameo appearance in the first film to love interest. Despite her fulfilling this role, she is not a one-dimensional character, showing rapier wit and providing a good deal of the comic relief for the film. This version of M.J. is unlike the previous version, instead casting away the ideal of the damsel in distress and standing as more of an equal, unafraid to pick up a battle ax (no, that is not a metaphor) and fight back. She also proves her cleverness by deducing Peter’s secret identity (that is not a spoiler, as the trailers have already ruined that reveal).

The story moves along at an engaging pace and hosts one a huge twist that reveals ties dating all the way back to the first Iron Man movie. The way this reveal was handled may quite possibly be my favorite scene of the film and showcases that what makes a villain formidable is not his powers, but his intellect.

Spider-Man: Far From Home is presented in an aspect ratio of 2.39:1. The ultra-high-definition 2160p  image is arrived at by an HEVC codec with an impressive average bitrate of 60-65 mbps. Spider-Man is one of Marvel’s more colorful heroes, and this makes him a wonderful candidate for 4K and HDR. The costume colors are vibrant and truly pop in almost every environment. The green gaseous weapon from Mysterio offers really nice color and texture, as does the makeup of the elemental creatures. The European locations offer some very sweet establishment shots that all look like they came out of a chamber of commerce flyer. There’s a lot of detail here, and that helps you uncover the many Easter eggs which require you to be able to read signs in backgrounds, which honestly isn’t so easy in the HD version. It’s that extra sharpness that makes this film that much more fun to watch. Of course, we’re talking about a 2K source, so much of this is an upconvert, but that’s still more than you’ll get in HD. Black levels are strong, particularly when Parker is wearing the black stealth suite at night. The ability of the high contrast and shadow definition allow you to make those necessary distinctions. The HDR contrast is also on full display with a molten rock creature glowing wonderfully red and orange against a pitch-black night.

The Atmos track defaults to a rather tame 7.1 mix. The audio presentation underperforms in almost every instance. The overall volume is low, and you have to crank it to get any real push out of your speakers. Subs do command the sound space at times but never dominate the way this action film should be dominated. Dialog cuts through and there are certainly some nice score moments, but the audio just doesn’t live up to the visuals here.

Deleted And Extended Scenes: (6:07) There are five with a play-all option.

Peter’s To Do List: (3:22) Watch Peter Parker perform the items on his list to prepare for the trip.

Teacher’s Travel Tips: (4:58) Watch the teachers handle some of the film’s events.

The Jump-Off: (6:19) Watch Tom Holland dealing with the stunts and physical demands of the shoot.

Suit Up: (4:38) This feature looks at the many versions of the costume used in the movie.

It Takes Two: (3:09) This feature focuses on the working relationship between Tom Holland and Director Jon Watts.

Thank You, Mrs. Parker: (3:35) A look at the younger version of Aunt May featured in these films. There’s a lot of cast and crew input but oddly nothing from Marisa Tomei.

Stealthy Easter Eggs: (4:21) This feature reveals some of the hidden nods to the fans.

The Brothers Trust: (11:44) This is a PSA for Holland’s family charity organization.

Select Scene Pre-Vis: (8:20) There are five side-by-side scenes with finished film and pre-vis. You get a handy play-all option here as well.

Jeremy Butler is a film school graduate of the International Academy of Design and Technology. He is been writing for Upcomingdiscs since 2012; however, movies have played a big part of his life for much longer. Favorite genres include horror, science fiction/fantasy, and comedy. Favorite movies are V for Vendetta, Boondocks Saints, Kiss Kiss Bang Bang, and The Godfather.
“31 Nights Of Terror” Crawl (Blu-ray) Death and Return of Superman ( UHD Blu-ray) (4K)