Posted in: Disc Reviews by Gino Sassani on October 17th, 2019 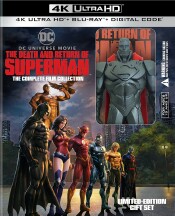 “You know me, always saving the day.”

After the disappointment that was the recent Suicide Squad animated feature, Warner and DC needed to save the day with the release of The Death of Superman, and that’s exactly what they did. The Death Of Superman was a major milestone in the history of the Man of Steel in the comics. It all started in December of 1992. DC announced they were killing off their most iconic hero and ending the Superman run of comics. Of course, that was only partially true. Once Supes was “killed off” the comic split into four new branches, as the vacuum created by his death needed to be filled both in the fictional universe as well as the commercial side of ours. Eventually the lines were reunited, and Superman has been alive and well ever since. But this was a huge event in the world of comics. The Justice League and Batman vs. Superman films used aspects of the story in the recent film, but this animated feature goes back to its comic roots and more faithfully brings that comic series to life. The Reign of the Supermen would follow and would tie up the story started in the first film. Now things would drift away from the comics somewhat, but it’s an epic story when viewed together, and that’s what Warner Brothers does with this release. It’s called The Death and Return of Superman and it combines both animated features into one near-three-hour event, and it’s out in 4K.

The film begins as the Justice League takes down the Intergang, who attempt to kidnap the mayor of Metropolis. It’s all in a day’s work for the team, and they soon settle down to what they hope will be some quiet downtime. Of course, we know that isn’t going to happen. Looking at the tech used by the gang, the League realizes that Lex Luthor is behind the grab, but they don’t quite understand why. But both The League and Luthor are in for a surprise when something approaches the Earth from space with apparent ties to Krypton technology. The visitor is the creature Doomsday, who doesn’t have any purpose but to kill and destroy. The Justice League get taken out one by one, and even Luthor can’t seem to overcome the mindless creature. Finally, it’s up to Superman to save the day. He does, but at great cost. Superman dies in the battle as well. The film ends with the world mourning the loss of the hero.

Six months later, and Superman’s body has vanished from his vault. In his place it appears as if four new versions of Superman have arrived. There is a clone engineered by Lex Luthor that’s more Superboy than Superman. There’s a Cyborg Superman who is being controlled by Darkseid, and he’s trying to open a portal to allow an invasion of the Earth. He does end up sending the Justice League to another dimension, so these supermen are all the protection Earth has. There is Steel, who is basically a guy in an Ironman-like suit. Finally there is The Eradicator, who is a Kryptonian program to protect Superman while he is being healed at the Fortress of Solitude.

The film ends with a bigger threat still left and the Justice League preparing for the worst with Lex Luthor offering his services.

The feature has a pretty solid voice cast here. It’s actually kind of nice that husband and wife team Jerry O’Connell and Rebecca Romijn play Superman and Lois Lane, particularly when Clark Kent reveals himself for the millionth first time and the start of the romance is sparked. It never really gets a chance before Superman’s fatal battle. Rainn Wilson, who is about to enjoy some box office magic in The Meg, voices Luthor. Rosario Dawson voices Wonder Woman, who sports a horrible version of the costume here. The whimsical Nathan Fillion voices Green Lantern. Christopher Gorham has limited time as the voice of The Flash. Criminal Minds and SWAT star Shemar Moore voices Cyborg. Jason O’Mara is Batman. Matt Lanter is Aquaman.

This is actually a very fun film. The pace is pretty frantic within a few minutes and doesn’t really let up at all. The 166 minutes literally fly by, and the battles bring out some of the iconic splash pages from the comic run. Honestly, this is what a Justice League film should be like, and it runs rings around the recent big-budget affair. Animation can deliver big moments with greater ease and also offers us a nice nod to moments in the books. With a few exceptions these animated DCAU films are far more entertaining than most of the recent box office efforts, Wonder Woman being the very notable exception.

The Death and Return of Superman  is presented in an aspect ratio of 1.78:1. The ultra- high-definition 2160p  image is arrived at by an HEVC codec with an average bitrate of 55 mbps. The ultra-high definition image presentation is pretty much spot-on. This film uses more traditional style animation. There aren’t so many of the odd style choices that have appeared in the last couple DCAU films. Colors are bright and vivid. There isn’t anything murky or dark this time around. The image is clean. I wish more of them looked like this.

The DTS-HD MA 5.1 mix is very average.  There isn’t a lot of aggressive surrounds, but I was impressed by the fullness of the audio. The subs are a huge part of that. They work not to overpower or shake your room but to give weight to the animated action. It also helps to deliver the kind of heroic deep voices that many of these animated efforts lack. It’s all perfectly balanced and amps up the entertainment value considerably.

You get four discs here. The two UHD discs contain the combined version and individual versions of the films. The same is true of the two Blu-ray discs, which also carry over all of the extras from both releases. You get a small Steel Superman action figure.

This isn’t the first time that this story has been used in the current run of animated features. 2007’s Superman: Doomsday also covers some of the same ground. “The ribs are on me.”

Gino Sassani is a member of the Southeastern Film Critic's Association (SEFCA). He is a film and television critic based in Tampa, Florida. He's also the Senior Editor here at Upcomingdiscs. Gino started reviewing films in the early 1990's as a segment of his local television show Focus. He's an award-winning recording artist for Omega Records. Gino is currently working on his 8th album Merchants & Mercenaries. Gino took over Upcomingdiscs Dec 1, 2008. He works out of a home theater he calls The Reel World. Favorite films: The Godfather, The Godfather Part II, The Body Snatcher (Val Lewton film with Karloff and Lugosi, not the pod people film), Unforgiven, Gladiator, The Lion King, Jaws, Son Of Frankenstein, The Good, The Bad And The Ugly, and Monsters, Inc.
Spider-Man: Far from Home (UHD Blu-ray) (4K) “31 Nights Of Terror” The Haunting of Hill House: Season 1 (Blu-ray)