Posted in: Disc Reviews by Jeremy Butler on January 20th, 2020 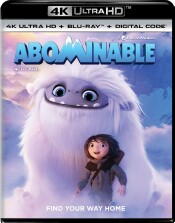 To say that this film got the Nalyce stamp of approval would be an understatement. In fact, I have never seen her take to a film in the manner she did this one. In the past, I’ve seen her be bored or entertained, but with Abominable, she was fully engaged, conversing with the characters as if they were real. While distracting at times, it was good to see her connect with the content on this level. For me and my wife, it was the embodiment of a family experience, as we both found ourselves enjoying this tale of kindness and friendship. The characters are in their own way all searching for something; something to bring them whole whether it be a home or rediscovering themselves following a profound loss. Agents of SHIELD’s Chloe Bennet makes her feature film debut in this animated adventure tale about a young girl that discovers a Yeti on the roof of her building and endeavors to help it find its way home. Joining the cast is American Horror Story’s Sarah Paulson, as well as Eddie Izzard. As mentioned earlier Bennet plays Yi, a young girl who has become a self-imposed loner following the death of her father. Despite her family’s efforts, Yi prefers to be alone, filling her time by working to go on a trip across China. Meanwhile, a Yeti escapes from a secret compound owned by wealthy businessman, Mr. Burnish (Eddie Izzard). Mr. Burnish is determined to prove the existence of the Yeti species in order to overcome an embarrassment earlier in his life when he attempted to recount a previous encounter with the species. Employing renowned zoologist Dr. Zara (Paulson), Burnish uses his considerable resources to track the species across Shanghai.

Yi finds the Yeti on her rooftop, and upon discovering this its demeanor is nothing more than that of a child, decides to help the creature return to its home on Mount Everest. Joining her on this quest are her neighbors, Peng and his cousin Jin. Their journey is full of twists and turns as they are pursued by Burnish and his army. To evade the group, the trio (quartet if you include Everest, the name they give to the Yeti) will have to rely on each other as well as Everest’s mystical powers to survive the trek.

Like I said, Nalyce could only sing the film’s praises. Since seeing the preview for the film, which I showed her as a means of gauging her interest, she was in love with Everest. Any time she was on the screen, she was all smiles and laughs, believing him to be the cutest thing (her words). My daughter was not the only one to speak of Everest’s cuteness. My wife was right next to Nalyce, uttering the same thing. Nalyce was especially keen on the relationship between Everest and Yi, viewing it like a big sister/little brother dynamic. I myself saw Yi as more a surrogate mother character to the creature, but I suppose that the two relationships are fairly similar. Both involve a degree of responsibility for another individual. That was a key dynamic in the film, as Yi is inexplicably thrust into this role of protector for the creature. Granted it is a role that she willingly accepts, but it did feel a bit forced in the very beginning. Perhaps, if the circumstances involving her dad were brought to light a bit sooner, it would have helped to explain her choice to assume responsibility for this creature.

The plot was far from predictable and features a midpoint twist involving a character that was previously well received. Around this time, another character discovers hidden depths and makes the transition from irritant to helpful companion, so that helped to alleviate some of the shock of the other character’s transformation. This change in the one character for worse took me, as well as my family by surprise, especially my wife, who felt inclined to call the character a word that required her to put a dollar in the swear jar. In regards to the other character’s transformation for the better, it helped to solidify their position among the quartet, and was naturally to be expected. Despite being expected, it did endear the character to my girls.

Adding to Nalyce’s connection with the film was the inclusion of a violin as Yi’s connection to her father. This instrument has bearing with my daughter, as she as recently expressed interest in learning to play. The composition used in the film was so beautiful and elegant that it has convinced me that perhaps this is a viable idea. The musical rendition played by Yi on the Leshan Giant Buddha is the highlight of the film’s tenderness, as she strums her violin with her heart finally made whole makes for a beauty moment.

Abominable is presented in its original aspect ratio of 1.85:1. The ultra-high-definition 2160p  image is arrived at by an HEVC codec with an impressive average bitrate of 75-80 mbps with the peaks often going over 100 mbps. The ultra-high-definition image presentation is highlighted mostly by the extra pop in some of the more vivid color moments. The exploding giant blueberries are a great example. Some of the reds and blues in clothing come alive quite a bit more brightly. There’s a moment when they are “surfing” a field of bright yellow/orange flowers or leaves, and it is without a doubt the film’s grandest color moment. The white fur of the titular character isn’t quite the texture milestone that I’ve seen in other computer-animated films. The white color is nicely balanced against other similarly white environments like when they are riding the fish clouds or the moments in the snow. It’s just not the best texturally of these kinds of films. There’s just not a lot of that kind of deep texture to be found here. Black levels are improved over the Blu-ray, adding a bit of a more deep and nuanced atmosphere to the film. The HDR certainly helps with those wonderful color moments, but there’s not a lot of outstanding contrast in the film itself. The film was rendered in 2K and upconverted for the UHD release.

The Atmos track defaults to a lively 7.1 mix. There aren’t a lot of aggressive surrounds to be found here, but there are some quite immersive moments. There’s an incredibly realistic rain falling early in the film. Of course, those manic chase moments bring more to the surround mix. Music cuts through most impressively, particularly the nice violin moments. Dialog comes through just fine. The subs are more aggressive than I expected. They are instrumental in producing the deep tones of the creature’s vocalizations. There are also some wonderfully filled subs during the music presentations.

The extras are on both the Blu-ray and UHD copies of the film.

Adding to the experience are two animated shorts and deleted scenes, one connected to the film, the other not so much, but both enjoyable, along with a litany of other behind-the-scenes featurettes that are definitely worth a look.

Marooned (07:18): Tells the story of a droid marooned on the moon dreaming of earth. When it meets another droid, the two work together to accomplish the goal. No dialog, but still enjoyable.

Show and Tell (02:50): Everest attempts to dazzle his people in the ways of humans after receiving a package from Yi, Peng, and Jin. This one tugs on the heartstrings, as he shares the most important thing he learned from the trio: affection. Stay tuned for the stinger attached to this short.

Making a Myth (06:58): The behind-the-scenes featurette that lays out the reason for the importance of the non-verbal communication between Yi and Everest, as well as what inspired the film courtesy of the film’s writer/director Jill Culton.

Animating Abominable (05:12): The behind-the-scenes featurette that explains where the look for each character came from courtesy of the graphic artist that designed them.

Meet The Cast (08:22): Want a look at how the cast really looks or hear about what drew them to this project? This featurette is the one for you, as well as a personal favorite of mine.

Your Yeti Care Guide (02:15): A clear PSA about the importance of caring for an animal.

Courage to Dream (03:04): This featurette is all about Yi, and how this character varies from the traditional mold of an animated character.

An Abominable Tour with Chloe Bennet (04:41): Chloe Bennet takes on a turn of all the historical places depicting in the film that Yi, Peng, and Jin travel to.

Ever Talk Box (04:35): Jill Culton and Todd Wilderman entertain a crop of kids by recounting how they came up with the voice for Everest..

Abominable is a kind and beautiful family friendly experience that also features a good deal of adventure. The bonds of the characters are the film’s most prized accomplishment, especially the tie between Yi and Everest, which serves as the film’s central point. However, she is not the only character that Everest makes a connection with. Through his gifts and playful demeanor, he is even able to turn foe into friend. The story is a worthwhile experience that I wholeheartedly recommend be shared with each member of the family.

Jeremy Butler is a film school graduate of the International Academy of Design and Technology. He is been writing for Upcomingdiscs since 2012; however, movies have played a big part of his life for much longer. Favorite genres include horror, science fiction/fantasy, and comedy. Favorite movies are V for Vendetta, Boondocks Saints, Kiss Kiss Bang Bang, and The Godfather.
Maleficent: Mistress of Evil (Blu-ray) Big Little Lies: Season Two