Posted in: Disc Reviews by Jeremy Butler on February 7th, 2020 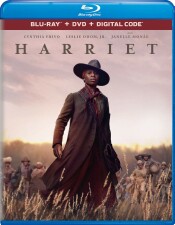 “You’ll die right here. On a frozen, blood-soaked battlefield, the moans of a generation of young men in your ears, dying in agony around you, for a lost cause. For a vile and wicked idea! For the sin of slavery! Can you hear them? God don’t mean people to own people, Gideon!”

Harriet Tubman, born Araminta Ross, is a staple of black history. Her deeds have been told and retold in history books for generations as one of the most successful conductors of the Underground Railroad, a network of anti-slavery activists and safehouses. Aside from her contributions to history, I knew very little about her individual history; that is a failing of mine. I’m not sure that an autobiographical film is the best avenue to correct this failing, given the propensity for things to be altered and sensationalize in order to draw crowds. However, even a sensationalized film has to have some basis in fact. Therefore, I am glad that this film made it into my queue, as it gave me a better understanding of Tubman’s accomplishment than I had previously. Bad Times at El Royale’s Cynthia Erivo takes on the monumental task of representing the historical figure on the silver screen, joined by Leslie Odom Jr. and Janelle Monae.

Araminta Ross is a slave married to a free man on the Brodess farm along with her mother and sister. Two of her sisters have been sold to another slave owner. When her father approaches Mr. Brodess regarding an agreement his great grandfather made to free Minty’s mother, Harriet Ross. when she reached the age of 45 (despite the fact that the mother has surpassed the agreed upon age by more than a decade), Brodess reneges on the deal. causing Minty to pray for his demise. Skeptical of such a thing, Brodess dismisses her prayers, that is, until his death. Upon his death, his son, Gideon, decides to sell Minty as punishment. Minty flees alone rather than be sold, not allowing her family to join her due to risk.

She is pursued by Gideon, and rather than face consequences, jumps from a bridge and is presumed dead. However, she makes it to Philadelphia where she meets Marie Buchanon and writer/abolitionist William Still. Inspired by their cause, Minty reinvents herself, and becomes one the greatest conductors of the Underground Railroad. As her accomplishment become legend, so does her speculation regarding her origins, putting her on a one-way track to confront the demons of her past.

That is the story, and though I do believe there to be many elements of matters being sensationalized, I must admit to it being a very compelling story. Interestingly enough, based on my own cursory research, the story appears to closely resemble fact, including the bit about sustaining a head injury in her earlier life and her experiencing vision and vivid dreams. It turns out that she was struck in the head by an irate slave owner with a heavy metal weight. According to historical record, Harriet believed the vision to be premonitions for God, just as it is illustrated in the film. I found that tidbit to be of particular interest, because I initially figured that bit had to be a product of the aforementioned sensationalization. As it turns out, it was true. Further speaking to the historical accuracy was the fact that Harriet did in fact escape from the Brodess family. Whether or not it was a Gideon Brodess, I cannot say, but given the other facts, I deem it to be possible.

Speaking of Gideon Brodess, or better yet the man playing him (Joe Alwyn), he played his role well, showing the traits of a weak man trying to prove himself strong in the eyes of others. His final scene with Erivo, from which the opening quote was taken, made the film in my eyes. Even in that moment, he continues to make his character unlikable. This is to be expected given the time period, but for me this man made Harriet’s speech all the more powerful. Said speech is included in the quote above, and the moment that Erivo stated that God didn’t intend for people to own other people, I felt the conviction of her words. This was one of my favorite moments that I feel excellently illustrated that Erivo was more than up for the task of depicting this historical figure. Her performance showed a woman willing to stand up to immeasurable odds despite the personal cost. It was not a fearless performance, as we often saw the nervousness on her face, especially during a standoff, but this display of emotion is what made it all the more realistic. Also those who were impressed with her voice in Bad Times at El Royalewill be treated to the opportunity to hear it again.

Harriet is presented in its original aspect ratio of 2.39:1. The 1080p image is arrived at with an AVC MPEG-4 codec at an average 30-35 mbps. The high-definition image presentation is understandably on the warm side of the color spectrum. Everything is rather bathed in earthtones with a decidedly huge emphasis on yellows, oranges, and browns. There are moments of color that peek through from time to time, like autumn leaves on trees and the Philadelphia settings where there is an intentionally stark cinematic style that is more crisp and alive. Black levels allow average shadow definition with a small bit of distortion on the edges at times.

The DTS-HD Master Audio 7.1 is far more aggressive at times than I expected it to be. The surrounds are filled with immersive audio that can include thinks like the beating of water against the hull of a ship or the clang of a railroad bell off in the distance. Mob scenes allow you to feel surrounded by angry “villagers” upset about the loss of their slaves. The score is also well supported in the surrounds. Dialog cuts through crisply. It’s a far more immersive audio presentation than it could have been, and that’s a wonderful attention to detail.

Deleted Scenes (15:35): Seven scenes that did not make it into the final cut of the film. I recommend “You’re an Angel”, which depicts the first act of kindness Harriet experiences after her escape. Also “John’s Wife”, which speaks to that personal cost that she was forced to experience and showed her emotional range.

Her Story (05:57): “The thing about Harriet Tubman from both an artistic and a commercial standpoint is that all Americans know her name, but nobody really knows her whole story.” This line from the film’s producer, Debra Martin Chase, perfectly illustrates the point I made earlier in my review. This featurette speaks about the five-year journey to create this story about this real-life superhero.

Becoming Harriet (03:38): Director/co-writer Kasi Lemmons, the film’s producers, and stars Leslie Odom Jr. and Janelle Monae praise Cynthia Erivo and speak to how she was the perfect candidate for the role of Harriet Tubman. Apparently, it was her role in a Broadway production of The Color Purple that clinched the role for her. I must admit that I am curious about this performance, though I have no doubt that it was very powerful.

My wife has been waiting to see this movie for months, ever since she saw the first trailer. Unfortunately our schedules prevented us from making it to the theater for this, but as luck would have it, it made it across my queue, and let me tell you as soon as she saw it, she refused to wait another instant to see it. She actually watched it without me, and then again with me. I had reservations, as autobiographical films are usually not my forte, but here I didn’t mind it. The story moved along at a good pace and provided a decent amount of historically accurate detail, including the closing scenes which show that Harriet went onto become a Union spy during the Civil War. The life of Harriet Tubman is truly inspirational, and I and glad that I had the opportunity to review this movie.

Jeremy Butler is a film school graduate of the International Academy of Design and Technology. He is been writing for Upcomingdiscs since 2012; however, movies have played a big part of his life for much longer. Favorite genres include horror, science fiction/fantasy, and comedy. Favorite movies are V for Vendetta, Boondocks Saints, Kiss Kiss Bang Bang, and The Godfather.
Summer Days with Coo (Blu-Ray) Exclusive Interview With Michael Starr: Director, Writer & Producer Of Cicada Song