Posted in: Disc Reviews by Michael Durr on February 6th, 2020 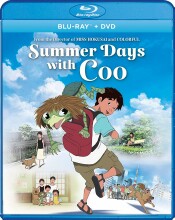 One of my main pet peeves in my life are the people who seem to hang on a celebrity’s every word, or worse, a reluctant celebrity who gets pushed into the limelight because of a heroic deed or misdeed.  I have little desire to be famous (except to be published and recognized as a writer), but if I were, I am pretty sure I would labelled as a recluse and shun the public eye constantly.  Today, we explore Summer Days with Coo, a tale about a Kappa who is found by a boy after centuries of being fossilized. Then suddenly he gets thrust into the limelight with some unfavorable results.  Let us see what this one has to offer.

As we open, we hear a young kid ask his father about dragons.  The father talks about the creature, saying they are scary but are good sorts.  We then see the kid and his father and realize they are Kappas, water spirits or demons depending on your point of view.  Suddenly they hear a noise and realize that Lord Shimizu is coming their way.  The father tells the son to hide while he talks to the human.

It appears that the father Kappa has a request for the official.  He has heard that they plan to drain the swamp in the area and make a rice field.  He asks that the Lord intervene on his behalf in order to preserve their way of life.  The official immediately accuses the Kappa of overhearing their nefarious plans.  Shimizu becomes irate, and even though the father tries to make nice, the samurai unsheathes his sword and threatens the Kappa.

The son comes out and tries to make peace in the situation, but that only further escalates the tensions.  The samurai gets extremely paranoid, and in a fit of rage, he slays the father.  The Lord then comes after the son, and he runs.  We then get a massive earthquake which shakes everything around them.  The son falls into the earth below and gets trapped beneath the rock.  That’s when everything starts to go black.

Modern day Tokyo.  It’s a rainy day, and kids are walking home.  We see Koichi Uehara walking with another classmate, and accidentally his shoe goes flying.  It ends up hitting Sayoko Kikuchi, a student the others often pick on.  The other kids start to make fun of both Koichi and Sayoko.  Frustrated, Koichi falls retrieving his shoe and then trips again almost instantly.  There is a rock there, and the boy picks it up and throws it against the wall.  It reveals the Kappa kid encased in the rock.

Realizing his discovery, Koichi holds it close and runs off towards home.  He runs into the bathroom and washes the fossil while his sister pounds on the door.  The fossil comes alive, and we realize it to be the Kappa from the beginning of the story.  Mom and sister eventually barge in and see the Kappa and immediately wish for him to be thrown out.  The boy protests and says he should be named.  He settles on Coo based on the sound he makes.   Eventually the father gets home from work, and they decide to keep the water spirit and make him strong again.  That’s when the real adventure begins.

Much of the beginning of the story explores the relationship between Koichi and Coo.  They go and try to find where Coo comes from in hopes of finding more Kappa.  Eventually they make their way back home try to live in normal society, and that’s where the problems start to arise.  People eventually find out about Coo and turn him into a celebrity, which he wants no part of.  The drama unfolds and leads us to more sad moments with so much crying that even Claire Danes would be envious.

Now, the film is good, don’t get me wrong.  It was released in 2007 and has been a favorite across the pond for over a decade.  It is animated beautifully, and we really get a slice of family life.  The time between Koichi and Coo down by the river is wonderful and serene.  I also enjoyed the interaction between Koichi and Sayoko (which certainly should have ended differently).  But for as much as the film tries to be uplifting, it just really wants to pull the heartstrings in every depressing way possible.

I’ll try as hard as I can not to spoil the film, but the last 30-40 minutes are ridiculous.  The film already overstays its welcome as it is (coming in at two hours and twenty minutes) but then goes overboard with not one, but three sequences guaranteed to sadden the hopeful viewers.  The boy Koichi must overcome incredible loss by the time the credits roll.

To be honest, if they had done a scene afterwards with the boy throwing himself into a river to drown, I would not have been surprised one bit.  It’s too sad, especially for the child audience who this would persumably be for.  Heck, they could have changed just one sequence, honestly, and the film would have benefited incredibly.

The film is shown in a 1.78:1 widescreen format.  As mentioned earlier, the animation is beautiful from the river to the ocean to all of the inside scenes.  We even get some dark shots which are handled well and still provide plenty of detail for us to chew through.   Some would describe some of the scenes (once we get into the publicity of Coo) as fairly plain, but it’s only temporary, as it is then replaced with some truly spectacular pieces as we close out the movie.  Shout and GKIDS have a done great job of restoring this movie for its American audience.

The audio tracks are DTS HD 5.1 in Japanese only.  The audio is certainly in the same league as the video.  The sound and more importantly music of the film do a wonderful job of immersing you in the film and don’t ask you to leave.  The surround sounds particularly flourish in the river and travel scenes where to get hear plenty of eye-opening sounds that mesh well with the action on-screen.  No complaints here, as it perfectly compliments the movie.  Subtitles are provided in English for the original Japanese soundtrack (unfortunately no English SDH).

Trailers & TV Spots  6:00:  Trailers include US home video, full length, 90-second, and 30-second versions.  TV spots include a full length and a 30-second spot.  I didn’t see any unreleased footage, and the general mood for all of these was an uplifting story about the Kappa and his relationship with Koichi.  If they only knew the super sad story underneath.

Summer Days with Coo has won its share of awards.  It won the Best Animated Feature Film at the 2007 Asia Pacific Screen Awards as well the Best Animated Film at the 2008 Mainichi Film Awards.  It was also nominated for the Best Animation Film at the 2008 Japanese Academy Awards but lost to the much appreciated – Tekkon Kinkreet.  It’s easy to see why this movie had so much acclaim with its tender and heartwarming story.  But at least for this reviewer, the charm and splendid scenery of the first half of the movie is brought down by the general awfulness of everybody in this movie that aren’t Koichi’s family (or Sayoko).  The absolute tragic third act does the film no favors either, as it leaves on a very somber moment.

The disc package of this film has certainly some high points in its treatment of video and audio.  It is highly unfortunate that they could not secure a few interviews or perhaps a commentary by an anime historian of some sort to give us a better insight on the film.  As it is, there are plenty of fans of this film who want to pick this up, as it has not seen our shores to this point.  I can certainly recommend this film as long as you have a towel ready (a box of tissues might not be enough).  Enjoy.

Michael Durr has been reviewing movies for the better part of fifteen years now. He primarily enjoys thrillers, sci-fi, animation and even a little courtroom drama. His favorite films include Escape from New York, the Goonies and anything with Alyssa Milano. When he’s not praising Kurt Russell as the greatest actor of our time or scratching his head over a David Lynch flick, he’s spending time at home in Texas with his lovely wife, Lori and his amazing son. How they put up with him is a mystery, but even Basil Rathbone doesn’t have the time to solve that one.
Trauma Center (Blu-ray) Harriet (Blu-ray)