Posted in: Disc Reviews by Archive Authors on May 20th, 2020 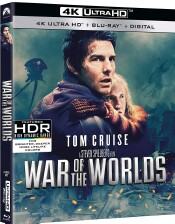 “No one would have believed in the early years of the 21st century that our world was being watched by intelligences greater than our own; that as men busied themselves about their various concerns, *they* observed and studied, the way a man with a microscope might scrutinize the creatures that swarm and multiply in a drop of water. With infinite complacency, men went to and fro about the globe, confident of our empire over this world. Yet across the gulf of space, intellects vast and cool and unsympathetic regarded our planet with envious eyes and slowly, and surely, drew their plans against us.”

Ray Ferrier (Tom Cruise) is a middle-aged divorcee with a blue-collar job and a rundown home in the New Jersey suburbs. When his ex-wife unexpectedly drops his estranged kids—ten-year-old Rachel (Dakota Fanning) and sixteen-year-old Robbie (Justin Chatwin)—off for the weekend, Ray is less than pleased. He’s always struggled with his parental duties, but now finds it increasingly difficult to communicate with his children. However, events beyond his control are about to force Ray to come to terms with his responsibilities. Bizarre lighting storms herald the arrival of alien tripods, which explode from beneath the Earth’s surface and begin dispensing death and destruction on the surrounding countryside. Narrowly avoiding the first attack, Ray returns home, grabs his kids, and embarks on a frantic journey across country to find their mother in Boston.

Tom Cruise is likeable in the lead role, and manages to pull off the everyman act fairly convincingly for someone as famous as he is. He’s definitely grown as an actor in recent years—starting with his turn in Paul Thomas Anderson’s Magnolia—and I am becoming increasingly interested in his work. Of the rest of the cast, only Dakota Fanning and Justin Chatwin have any real screen time. In this movie Fanning isn’t really required to do much beyond acting like a terrified ten-year-old girl, which she does with her usual brilliance. I’m constantly amazed by how self-assured and composed she remains in the presence of superstars such as Cruise and De Niro (not to mention a director like Spielberg). Chatwin also puts in a decent performance as Ray’s moody teenage son, accurately portraying the kind of sullen resentment that many children of broken marriages harbor towards their ‘unfit’ parents.

For the first hour or so the story moves at a frenetic pace, with Ray battling to escape the horrific destruction of his hometown and bring his children to ‘safety’ in Boston. The scenes in which the first tripod emerges and begins to obliterate everything in sight are awesome, as the victims of the heat ray simply turn to dust at its touch without even the luxury of a terrified scream. It’s not until the actors enter a disused farmhouse that the film takes a turn for the worse, with the unnecessary reveal of the aliens and a silly sequence in which Ray single-handedly takes down an alien war machine. After the tense, action packed opening and middle acts, the film just peters out towards its very abrupt ending.

There are a number of serious logical flaws that really take the shine off of the movie. I’ve no problem with the makers updating the film to a contemporary setting, but why on earth did they decide that the aliens were, to paraphrase the marketing blurb, ‘already here’? It makes for an impressive reveal of the tripod menace, but it’s fairly nonsensical. Why would an incredibly advanced alien race travel x number of light years to bury machines under the ground when they could simply have deployed them from orbit? Furthermore, wouldn’t the aliens have developed significantly more advanced technology over the years between the burial and activation of their machines? Why go to war in outdated hardware? I was hoping Spielberg would address these issues in a possible commentary track, but alas, no.

War of the Worlds had the chance to earn itself a place in the hall of great films from Spielberg. However, it decided to take a road very often traveled by making the movie seem overly simplified for its audience. This resulted in the film being entertaining, yet resulted in me not really grabbing much from the film.

War Of The Worlds is presented in its original aspect ratio of 1.85:1. The ultra-high-definition 2160p image is arrived at by an HEVC codec with an impressive average bitrate of 55-60 mbps. The native 4K negative elements allow for this to be a pretty good representation of the original theatrical experience. The mood and lighting are often quite gray and dreary, but it holds a nice organic texture that actually takes a somewhat dull color palette and make it so much more atmospheric. The dreariness has so much more purpose at this kind of a resolution where the HDR allows for wonderful contrast. Details are nice in the close-ups where you can see fine textures and skin tones. The CGI isn’t quite as much of a bump in resolution, but there are some pretty dynamic moments. The transfer maintains the grain elements, and there’s a boost when there are explosions including those rays being fired from the tripods, and the disintegration effect works so much nicer here. The Blu-ray was somewhat of a disappointment that is finally rectified here. Black levels are nice, allowing important shadow definition to come through.

The Atmos track defaults to a solid solid 7.1 mix. The first thing you’re going to notice are those powerful subs. They will shake your environment as the tripods are breaking through the streets, and it continues as they start blowing stuff up. The surrounds offer nice placement with crowd sounds as people flee the city. Dialog manages to cut through it all quite finely. The score uses the surrounds to offer those swells and crashes that get you fired up for the on-screen action.

The extras are all on the Blu-ray copy of the film and match that of the earlier Blu-ray release..

War of the Worlds is an entertaining sci-fi romp that takes a novel approach to the whole ‘alien invasion’ scenario. It’s interesting to witness the events predominantly through the eyes of an average American family, without all of the usual clichés involving convenient made-made solutions like computer viruses. The film is a solid two hours worth of entertainment that only really falters towards the end.