Posted in: Disc Reviews by Brent Lorentson on March 26th, 2021 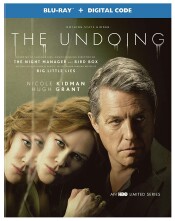 In the HBO limited series The Undoing, we get a scandal and murder that affects the high society of New York’s elite. I’ll admit at first glance this doesn’t seem all that original, but then when you see it stars Hugh Grant and Nicole Kidman, it was enough to give this a closer look.  Then I notice the six-episode series is penned by David E. Kelley (The Practice, Ally McBeal, and Big Little Lies), and this really grabs my attention. Helming the project behind the lens is Susanne Bier, who directed the Netflix hit Birdbox (though I wasn’t impressed) but also the limited series The Night Manager (which was pretty great).  With all these combined along with the backing of HBO, this seemed like it had more potential than I first thought, and for the most part this series didn’t disappoint, but is it worth sitting through six episodes to get answers in this whodunit?

Episode one of The Undoing introduces us to Jonathan Fraser (Hugh Grant) and Grace Fraser (Nicole Kidman) who seem to have it all: successful jobs, a happy marriage and family.  Jonathan has a successful and noble career helping children who have cancer, and Grace is a successful therapist.  The Frasers are a part of the elite, and their son Henry (Noah Jupe) is enrolled in one of the most prestigious private schools in New York.  Everything goes sideways when a parent at the school is found murdered,, and the last people that may have had contact with the woman are the Frasers. It definitely has the feel of Law and Order, just with better writing and better dialog. The first episode does a good job with baiting the audience, but it’s the following episodes that definitely elevate the series.

The murder of Elena (Matilda De Angelis) is definitely tragic, and the series shows how her death and infidelity impacts all those around her.  When we first meet her she seems odd and mysterious, and in her death we as viewers get a glimpse into the woman she was.  How she is entangled with the Frasers seems odd at first, but this is definitely a theme over the arc of the show, that nothing is as simple as it seems.  It’s strange how this character has an arc over the story where it’s not developed in her performance or something seen, but instead her arc comes through what others say about her.  Is any of what is said about her even true?  I wish more focus was put into this, about how the way characters view a person can form a character just by their perspective.  Sadly this is dropped, and Elena is nothing more than a plot device.  Even her creepy interactions with Grace and Grace’s “flashbacks”, or how she visualizes interactions with Elena, most are not even real, so how much of the narrative can be trusted?

Nicole Kidman definitely has bounced back. It seemed for a while that she was a bit of a fading star, but in the past couple of years, she’s definitely had a resurgence.  For most of this series I’d say she’s delivered one of her best performances. She really delivers a captivating performance. As for Hugh Grant, this is a performance I wasn’t expecting. and to be honest. as much as I like the guy. I was surprised how well he pulls this role off.  This is a physical performance from Grant that’s rather subtle. but with what he manages to express with facial tics and emotional outbursts, it’s hard to imagine this is the loveable guy from Notting Hill. The dynamic between Jonathan and Grace is certainly one of the strengths of the show. Just seeing these characters unravel on screen is what kept me wanting to watch.  The Undoing is simply about how easily a life can unravel. Jonathan and Grace are grasping to keep things together.  If her husband is innocent, can their marriage and family survive his infidelities?  With Grace being a therapist and marriage counselor, she’s practiced the belief a marriage can survive anything. Now she’s the one going through the betrayal and possibly worse.

Donald Sutherland is great as Grace’s father. The dynamic between Grace and her father left me wanting more just because Sutherland and Kidman are so good together.  If there was any doubt when it comes to whether Sutherland still has his acting chops, in Episode 4 he has a sequence where he speaks to the headmaster at Henry’s school … seriously one of the best moments in the series.  That takes me to Henry.  This is a complicated role for any young actor, and Noah Jupe does an incredible job throughout the series, despite how prevalent he is in the story, I feel there were some missed opportunities with this character.

Story-wise, the first four episodes are where the series is at its strongest. I was hooked on how just when you think the killer could possibly be one person, a scene comes up that points the finger in another direction.  The downside to this is that as the story continues to play out, you see that these misdirections are nothing more than cheap twists, and don’t further the story, but are just injected to keep the viewer guessing.  I’m fine with keeping us guessing, but there are moments where we quite literally see a character do something suspicious, a deliberate scene to give us reason to suspect them as the murderer, but it is never expanded upon.   Some of these moments are done to show us that none of these characters are perfect.  I’m glad we get to see everyone’s flaws, because it does make them feel more real, but sometimes upon further reflection we realize it doesn’t make sense.  The most problematic of these situations revolves around the murder weapon … I won’t spoil it, but where the show could have had a fun and darker twist that actually would have made sense … they play it safe and as a result create numerous plot holes.

The last two2 episodes undermine everything that was working so well.  It’s so frustrating how the rest of the story unfolds. It’s an attempt to be clever, but really it just comes off as a cheap move that is just baffling as to why they’d go this direction.  You don’t even need to be a legal expert to know how flawed the last episode is.  I watched the series in one sitting, I was that engaged in the story, and when the last episode played out, I was gobsmacked by how absurd it had gotten.

Director Susanne Bier does a remarkable job despite the story issues in the last two episodes.  This is such a beautifully shot series, and the performances she’s able to pull from the actors are what save this show in the end.  Despite the absurdity of the story, she still pulls it off … just don’t allow yourself to think about the “twists”.  The work she did on the first four episodes was amazing, and I feel this could have been a contender for the best series of the year, but once she got to the courtroom, it’s like her momentum shifted.  Even with how the series wraps up, it just felt rushed and incomplete.

The Undoing is presented in the aspect ratio 2.00:1.  The 1080p image is arrived at with an AVC MPEG-4 codec at an average of 32 mbps.  This is a beautiful transfer that is basically flawless. I feel like New York has never been so beautifully captured, and this is one of the best looking shows I’ve seen in a while as it captures the city during the fall/winter.   Hugh Grant looks rough here. The makeup and lighting help the capture every deep line and crevice that reveal everything the character is going through.  Color doesn’t seem to pop; there’s a coldness to this show that is very fitting for what is going on.  In the first episode, this is the only portion where I feel there is any warmth in the color palette, but all that is stripped away when Elena is killed.

The DTS-HD Master Audio 5.1 track is kind of unremarkable, though that’s to be expected in a series that is mostly focused on the dialog.  There’s a nice ambiance of the city, but really, this is a show if you were watching it in Mono 2.0 you wouldn’t lose much in the presentation.

The Undoing: Revelations (22 mins) Broken up into 11 parts over the two discs, basically this is just a little insight to each of the major characters with the actors discussing their parts.

Nicole Kidman &  Hugh Grant Introduce The Undoing: (4:04) A brief conversation with the actors discussing the series.

Creating The Undoing: (3:11) The filmmakers discuss the project and why they made it, very short and to the point.

This started out so great.  Great performances, great dialog, and had everything going for it to be a solid whodunit … but then it all comes crashing down in the end.  If you’re a fan of Law and Order and you lower your expectations, then I feel you’ll enjoy this.  The performances and the cinematography make this worthy to watch to the very end.  Sure, when you watch it you might think I was hard on it, but once you start thinking about how everything unfolds, you’ll see the story has enough holes to be a spaghetti strainer.

Brent Lorentson is a horror writer and film critic based out of Tampa, Florida. With a BA in Digital Film, he co-wrote and co-directed Scavenger Hunt. His short stories have appeared in various horror anthologies. In 2019 his short script Fertile Blood will be a part of the anthology horror film Slumber Party. He is currently working on his first novel A Dark and Secret Place set to be released in late 2019. Favorite Films: Taxi Driver, Fight Club, I Saw the Devil, The Wild Bunch, Dawn of the Dead, A Clockwork Orange, Pulp Fiction, Heathers, The Monster Squad, and High Fidelity.
Godzilla (2014) (UHD Blu-ray) (4K) Earwig and the Witch (Blu-Ray)