Posted in: Disc Reviews by Jeremy Butler on November 9th, 2021 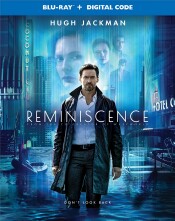 “You’re going on a journey. A journey through memory. Your destination? A place and time you’ve been before. To reach it, all you have to do is follow my voice.”

So, an interesting factoid that I learned about the film’s director Lisa Joy: she is the sister-in-law of director Christopher Nolan. This doesn’t really add anything to the review, just an interesting fact that I thought I’d share. Then again, I do remember thinking when the film first opened up that it felt very shades-of-Nolan. Not to say that Nolan had any influence over the film, but just the idea of a movie based off a construct is very much in his wheelhouse. Memory is the construct that is explored in this film, and I must admit that the addictive nature with which the film portrays this construct did have some appeal; however, the film tries to bring too many different themes and elements together, and it results in not enough attention being paid to any of them. Hugh Jackman and Rebecca Ferguson are the film’s big draws, and while their electricity helps to make the film decent, it cannot make it great.

“The past can haunt a man. That’s what they say. That the past is just a series of moments. Each one perfect. Complete. A bead on the necklace of time. The past doesn’t haunt us. Wouldn’t even recognize us. If there are ghosts to be found, it’s us who haunt the past. We haunt it, so we can look again. See the people we miss, and the things we missed about them.”

Jackman plays Nick Barrister, a veteran of a war that is hinted at but never completely explained. Following this war that is only mentioned in passing, Barrister makes his living as a sort of a private investigator of the mind, helping clients relive past memories with the help of a machine that is very fully explained. Seeing a theme here? In a sense, the machine, with the help of Nick’s voice acting as a conduit, lulls clients into a trance, allowing them relive their past memories, which are displayed on a three-dimensional space for Nick’s viewing pleasure. This profession also allows Nick to moonlight for the DA’s office, which uses this technology to gather evidence.

Nick is a haunted individual, but the nature of what haunts him is also never really made clear. He leads a solitary life until he meets Mae (Rebecca Ferguson), who comes to his business for an open-and-shut case. Despite the simplicity of her case, Nick finds himself drawn to her and she to him. This intrigue leads to a passionate affair until Mae disappears without a trace. Desperate to find her again, Nick plunges his own memories looking for clues as to where she’s gone, because in his own words, “People don’t just disappear.” His obsession to find her sends him down a rabbit hole that not only gets him entangled in a life-threatening mystery involving some of the world’s most influential people, but puts him hot on the love-of-his-life’s trail. But the more he learns, the less he may recognize the woman that he came to love.

So as I said, there is a fair amount of intrigue to the film. It has sort of a sci-fi neo-noir vibe to it, but nothing was really explained to my satisfaction. For one, the setting is built up to be some type of dystopian version of Miami. Basically, the water levels appear to have risen up and swallowed sections of the world. Dams have been built to keep the flooding at bay, but still the ground is always wet, and in some places it is necessary to travel by boat. I’m pretty sure the currency system has changed, too, but it is never directly addressed. This flooding apparently sparked the war that is mentioned frequently but never outright explained (or if it was, it was done so quickly that it was over before I was able to commit it to memory). While we don’t know much about this war, the impact of it in terms of battle scars is prevalent among the characters. For example, Watts (Thandie Newton), Nick’s only friend and employee, is so haunted by her experience that she abandoned her child and attempted to drink herself to death. That is, she would have except for the fact that “Nick doesn’t pay me enough to drink myself to death.” In reference to Nick again, it is clear that Nick too is marked by his time in the war, so much so that it is clear that he relives it, but it is never expressly stated what haunts him. I think this knowledge would have gone a long way towards establishing an emotional bond between the film’s protagonist and the audience. Without it, Nick is just a lovelorn obsessive who seems prepared to get himself and anyone around him killed in pursuit of his beloved Mae.

Speaking of Ferguson’s character, she was the most intriguing character for me. She was in possession of a layered personality, and her actions were the window in which the film’s central mystery plot was brought into focus. When we first meet her, I could see why Jackman’s character was so enamored with her. Ferguson fit like a glove in the role of the femme fatale, and as the film went on she just embodied that role more and more. However, this caused her to overshadow the film’s central mystery that she was caught up in. As an audience member, I was more caught up in the question of where she was, more than the question of what she was mixed up in. There needed to be more of a balance between these two questions.

Reminiscence is presented in its original aspect ratio of 2.39:1. The 1080p image is arrived at with an AVC MPEG-4 codec at an average 35-40 mbps. The high-definition image presentation is pretty solid. We were originally expected to review the UHD in 4K, but supply issues changed the studios plans. I’m a bit disappointed, because I imagine that this future flooded Miami has a lot more detail to offer than what we find here. The image looks rather pale here, and a lot of that is a rather muddy blend of the CG work and live action on a often dark canvas. Colors don’t really pop, and they’re not necessarily expected to, but I really would have liked for there to be better contrast with richer blacks and better shadow definition. Instead I kept feeling like I was missing out on the careful production design that did a very solid job of creating this space. The image is certainly clear, and with no noise or compression issues it just looks rather flat against the expectations.

The Dolby True-HD Master Audio 7.1 is pretty much a serviceable audio presentation. There’s a closeness and intimate quality to the mix that works well for the material. It means close and upfront dialog with a subtle score consisting mostly of quiet guitar and piano themes. That quiet actually serves the atmosphere. Subs disappoint and don’t really kick in at any place in the film. The surrounds offer a few nice moments, but you’ll find them pretty dry throughout the movie. Water is given some little moments that keep you immersed in this flooded atmosphere.

Reminiscence – Family Reunion: (8:14) This behind-the-scenes feature focuses on writer/director Lisa Joy and the family of cast and crew that all work together on Westworld. It turns into a bit of a mutual admiration society lovefest but there is some nice footage from the production.

You’re Going On A Journey: (4:07) Cast and crew offer insights into the memory concepts at the heart of the film. Again there are some nice behind the scenes moments here.

The Sunken Coast: (7:05) This feature focuses on the flooded production design to depict the future underwater Miami.

As far as the film’s conclusion, that portion was fairly obvious with one notable alteration. I won’t go too much into what that alteration was, but even so, I was left feeling underwhelmed. Reminiscence was a very intriguing idea, and there wasn’t anything about it that I just outright hated, but I just don’t feel like I was given enough information to be able to fully enjoy what was being presented. The story is fine, but its deviating themes pull focus from each other instead of balancing one another. I’m still like the idea of a sci-fi neo-noir, but there were too many things that needed to be fleshed out in order to establish the emotional resonance that this film required.

Jeremy Butler is a film school graduate of the International Academy of Design and Technology. He is been writing for Upcomingdiscs since 2012; however, movies have played a big part of his life for much longer. Favorite genres include horror, science fiction/fantasy, and comedy. Favorite movies are V for Vendetta, Boondocks Saints, Kiss Kiss Bang Bang, and The Godfather.
The Honeymooners Specials: A Christmas Carol L.A. Story (Blu-ray)