Posted in: Disc Reviews by Archive Authors on November 11th, 2021 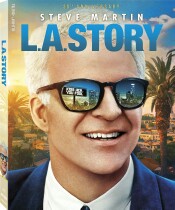 “My name is Harris K. Telemacher. I live in Los Angeles, and I’ve had seven heart attacks. All imagined. That is to say, I was deeply unhappy, but I didn’t know it because I was so happy all of the time.”

Steve Martin plays a wacky TV weatherman who develops a close friendship with an electronic freeway sign in the sleeper hit comedy L.A. Story. I found the critically acclaimed film to lack hilarity, but it does get marks for inventiveness. Martin is enjoyable in most anything he’s in, even if the material is not so great. L.A. Story is one such example of an actor rising above said material. Most of the over-the-top silliness misses the mark, and Marilu Henner has little more to do than play the cliché  of snobbish socialite. The true love of the Martin character’s life – played by Victoria Tennant – is so bland vanilla I would have much rather seen him end up with his free-spirited squeeze toy (Sarah Jessica Parker), though any such relationship would be doomed to fail. At least there would be some excitement.

With that said, I did enjoy the basic hook: Martin’s interaction with the fun-loving freeway sign. The sign is just a series of bulbs lit to form questions, comments, and riddles, but there is a quirkiness to it that shows more character than any other supporting player in the film, save for Parker. Director Mick Jackson manages to make the most of this bizarre relationship, but he works from a script that lacks enough interesting additional characters to be a great film. Also, the happy ending feels tacked-on and abrupt, and if you’re of my opinion, lacks the happiness part so desperately needed. Sure, things work out. It’s a comedy. But at the end of the day, Martin’s victory doesn’t seem worth winning.

L.A. Story is presented in its original aspect ratio of 1.85:1. The 1080p image is arrived at with an AVC MPEG-4 codec at an pretty steady 40 mbps. The high-definition image presentation is not really a new transfer or restoration. There are still plenty of artifacts on the film, and there is considerable wear here. Colors actually pop at times when we’re seeing the bright sunshine of L.A., but interior shots suffer from softness both in image and colors. Black levels are pretty bad with almost no shadow definition to speak of. The night scene where he’s talking to the sign is quite muddled.

Lions Gate provides both 5.1 and 2.0 English tracks. While 5.1 is almost certainly the way to go, the 2.0 track has the advantage of not spreading itself too thin. With a film such as L.A. Story, with such light emphasis on action and sound nuance and such heavy focus on dialog, the 5.1 track can too often err towards laziness. It isn’t that there’s anything wrong. There just isn’t enough for it to do to be truly effective. That was the impression L.A. Story‘s 5.1 track left with me, to the point that I actually prefer the more stripped-down 2.0 version, which evenly distributes dialog and sound quality at a lush, full volume across both speakers.

All of the extras are ported over from the earlier release.

L.A. Story violates my one and only rule for what makes a good comedy – it isn’t funny. Some things are supposed to be funny, but if I’m not laughing, I’m not laughing. It isn’t my fault, especially when I get the joke. But what’s funny to one isn’t to another, and vice versa. The film has a large share of supporters, who might turn a blind eye to what I call comedy. I respect that.