Posted in: Disc Reviews by Jeremy Butler on December 22nd, 2021 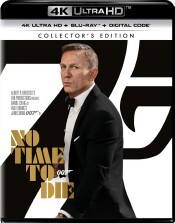 “As long as we are looking over our shoulder, the past is not dead.”

When it comes to Daniel Craig’s Bond movies, I’ve found them to be hit-or-miss. There are those I love, such as Casino Royale and Skyfall, and then there are those that I wasn’t that into, such as Quantum of Solace and Spectre. However, when it comes to No Time to Die, there is no question that it is my favorite of all the Craig-led Bond movies. Maybe it was how long I’ve been waiting to experience it given that the onset of COVID resulted in the film’s release being delayed multiple times, so by the time it was finally here, I could barely contain my excitement. However, I think it is more likely that the reason is the knowledge that this will be Craig’s final portrayal as the suave secret agent with a penchant for shaken martinis. Either way, Craig’s swan-song film was without question great, despite certain elements not delivering on the hype. Craig leaves the franchise with is head held high, as I cannot imagine a more dignified exit for his portrayal.

Let’s do a brief recap, given the long gap between Spectre and the release of this film. When last we saw Bond, he had brought down his greatest foe in Ernst Stavro Blofeld (Christoph Waltz), also bringing down his global terrorist organization. In his personal life, he has fallen in love again, despite this idea seeming impossible following the betrayal of his great love, Vesper Lynd, but even so he has found love with the enigmatic Madeleine Swann (Lea Seydoux). With happiness within reach, he decides to leave his life of espionage behind to pursue a future with Swann.

When we find Bond, he and Swann are enjoying their life together, and with her encouragement, he appears ready to let go of the past so that they may have a future. Confronting the past, he narrowly escapes an attempt on his life, an assassination attempt that calls into question whether or not the love of his life (or should I say the new love of his life) was complicit in the plot. There would seem that there is no escaping your past, as Bond again finds himself doubting the love and loyalty of the woman he has chosen to give up his entire life for. This was a nice callback to Craig’s first film, as it shows that the character is continuing the same cycle of mistrust and doubt. I thoroughly enjoyed this callback to the original film, and it served as the perfect vehicle for the film’s plot as well as character development for this version of the character, as we too find ourselves questioning whether Swann can be trusted. Once again, Bond is drawn into a global security plot with far-reaching consequences, despite attempts to leave his old life behind. This time, however, he finds himself up against an enemy who both admires him and despises him.

So firstly, I want to talk about the film’s big bad. In my opinion, Rami Malek of Mr. Robot and Bohemian Rhapsody fame was severely underutilized. The entire film, we are inundated with his character’s genius, ruthlessness, and capability, so much so that he even manages to counter a plot devised by another criminal mastermind’s character, not only depriving that mastermind of his sought revenge, but also managing to bring about his downfall to boot. This speaks to Malek’s character’s criminal mastery, but Malek himself only appears in a handful of scenes. And the scenes he appears in show that the character’s mystique was greater than the man. I just feel that if you were going to go to all the trouble of lining up Malek as the big bad, use him. I mean, that would make sense to me. Honestly, I’m not even sure if I got a great sense of the character’s overall endgame. Don’t get me wrong; the character managed to accomplish something that had lasting implications for the criminal underworld as well as Bond himself, but overall what drove him outside of simple revenge was paper-thin. There should have been more emphasis on the character, to include maybe a clear explanation of his endgame.

OK, now that I got that off my chest, I want to address the intrigue of the film. As I mentioned earlier, I was really pleased that the film was able to bring things full circle, tackling Bond’s trust issues when it comes to those he loves and what that mistrust costs him. In this realm, I feel like the film really dug deep with the character and gave a clear understanding of him. Then, of course, there is the commitment to maintaining consistency, including bringing back the same characters as well as the actors who portrayed them since Craig’s tenure. I mean, naturally, I’d expect consistency when it came to people such as M and Q, but consistency was also maintained to make sure that we got to see Naomi Harris’ Moneypenny, Jeffrey Wright’s Felix Leiter, and most impressively for me, Rory Kinnear as Tanner. Consistency is a big thing for me when it comes to movies, so this won a lot of points with me.

In addition to maintaining the original cast, the film also introduces several new characters in Ana de Armas as CIA agent Paloma, and more significantly, Lashana Lynch as Nomi, MI6’s latest “00”, but not just any “00”. Her designation will have significance to Bond, which goes on to create a witty and entertaining rivalry between the characters. If time had permitted, I would have loved to see more of this rivalry. As it stands, it was still satisfying.

Speaking of time, when you come to see this film, make sure you get yourself a comfortable seat, as the film is just shy of three hours long, and the plot does at times progress at a slow-burn pace. To be fair, given that it is to be Craig’s final portrayal, I’d expect nothing less. There is a lot to go through to set up this finale, and what a finale it was. Granted, there is a whole lot of foreshadowing of the film’s eventual conclusion. I will not give away the ending, but I will say I was not shocked or surprised with its inevitability. Even so, it still plays well and makes for a great conclusion to the story. Everything came full circle for me, and I was predominantly satisfied with it. So in closing, I merely want to thank Craig for his portrayal and wish him well with his next project. As far as Bond goes, I’m curious to see who and where the character will go next, because, let’s be honest, Bond will never truly die.

No Time To Die is presented in its original aspect ratio of 2.39:1. The ultra-high-definition image presentation is arrived at with an HEVC codec at an average of 70 mbps. The film was shot on 35mm and 70mm so maintains a native 4K source and that makes a huge difference here. That’s why there is a significant improvement over the Blu-ray copy of the film. It starts with some of these wonderful vistas like something out of a travel brochure. This transfer brings them alive so vibrantly that the locations are truly immersive. The next thing you will notice is the incredible detail and exceptional textures, from costumes to the historic walls of near ancient buildings in Italy. Colors are vibrant and crisp thanks to a fine Dolby Vision process that gives you more than was ever possible before UHD came to home video. It’s a show-off piece to be sure, one of the best I’ve encountered. It still doesn’t beat My Fair Lady, but it’s close. Black levels are inky black with rich shadow definition.

The Atmos track defaults to a really solid 7.1 mix. The surrounds are going to be busy throughout. There’s a lot to love about the audio presentation as well. You will feel totally surrounded by the exotic environments with perfectly placed main and subtle sounds. All of the speakers appear to be working at once, delivering everything from lapping water to feet walking across a gravel driveway. The score comes through well without ever intruding on the rest of the film. Hans Zimmer delivers sweet emotional beats and isn’t afraid to dip into that Bond theme music from the 60’s. Dialog is always clear and well-placed. The action doesn’t disappoint, bringing those once subtle surrounds to powerful effect. The subs deliver some truly explosive moments as well.

Anatomy Of A Scene: (11:32) This feature focuses on the opening sequence with scene-specific behind-the-scenes footage along with input from cast and crew.

A Global Journey: (7:50) This one looks at the stunning locations, which are a hallmark of Bond films from the beginning.

Designing Bond: (11:04) Here you get all things production design from gadgets anf vehicles to costumes and sets.

Being James Bond: (11:39) This is the only feature exclusively found on the UHD disc, although it is not in 4K. The rest can be found on both the Blu-ray and the UHD discs. It’s a trip down memory lane and plays out like a documentary on the Craig years playing Bond.

This is Craig’s last stint as James Bond. Couldn’t come soon enough for me. Frankly, I was disappointed they brought him back this time. He was grousing about the part, and the last film was truly a good swansong for Craig’s era. This film is actually quite good but goes too far with the ending. Whatever you think of the way the film ended, one thing is for certain. “James Bond will return.”

Jeremy Butler is a film school graduate of the International Academy of Design and Technology. He is been writing for Upcomingdiscs since 2012; however, movies have played a big part of his life for much longer. Favorite genres include horror, science fiction/fantasy, and comedy. Favorite movies are V for Vendetta, Boondocks Saints, Kiss Kiss Bang Bang, and The Godfather.
Holiday Gift Guide Spotlight: The Film Detective – The Sherlock Holmes Vault Collection Venom: Let There Be Carnage (UHD Blu-ray) (4K)