Posted in: Disc Reviews by Michael Durr on April 4th, 2022 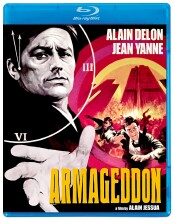 The power of the media is indeed one of the most powerful forces on Earth.  They have the ability to manipulate regardless of where the truth actually lies.  This exists on all sides of the political spectrum regardless of country, creed, or faith.  It is truly sad that such fabrication actually exists and even more unfortunate that people will take it in hook, line, and sinker.  Our film today, Armageddon, takes place in France, but plays havoc with manipulating those all over Western Europe by using the media to instill fear.  Fear of mortality, fear of losing life, a fear that makes the strongest person into a blithering child.  Let us take a look.

A SOS car stops, and a repairman by the name of Louis Carrier (played by Jean Yanne) steps out.  He yells at his friend, Einstein (played by Renato Salvatori) who is picking up trash that he just inherited 250,000 bucks.  It seems that his brother died and left behind a life insurance policy.  Furthermore, it is his lucky break, and he is saying goodbye to his dear friend.  Einstein asks him what he is going to do, and Louis replies, “Make the headlines.”  Let’s roll those credits.

While the credits roll, we watch Louis purchase himself a nice vehicle and then drive to Paris.  He then has a baguette to eat and loads a gun.  He finishes it off by standing in front of a mirror, poses and whips out a gun like he’s in a showdown at OK Corral.  Later at a transportation conference where the Prime Minister (played by Bertrand De Hautefort) is present, the repairman in disguise approaches him with murder on his mind.  Security restrain him for a momentary second, and instead of executing the minister, he ends up shaking his hand.

The next days he sees the paper, and he has indeed made the headlines by giving the prime minister a “warm welcome”.  He decides to take a different approach and recruits his friend, Einstein, to help him by taking pictures.  Later after some picture taking, Einstein is reading a book titled L’Apocalypse La Bible, or if you prefer, the Book of Revelation.  Louis takes a look and plucks out a name, Armaguedon (Armageddon) and adopts the name as his moniker.  Essentially God’s wrath and punishment seems to be a fitting premise for what is about to occur.

Louis sends a tape to Scotland Yard that he plans to select a target and then murder said target.  But this is also about the same time where the mental stability of Carrier starts to diminish as the days start to count down.  The violence escalates and the reasoning falls apart.  He even goes as far as to threaten Mick Jagger. Is there no limit to what this man will do?  It looks like Interpol needs help, and help resides in the form of a psychologist named Dr. Michel Ambrose (played by Alain Delon).  But can Dr. Ambrose figure out who Armageddon is in time to stop a high-profile murder?  Or will he be too late?

This film directed by Alain Jessua becomes a very well thought out and powerful thriller.  The three leads all turn in fantastic performances, but perhaps the biggest surprise is Renato Salvatori’s performance as the slow-witted Einstein.  The raw emotion of this borderline autistic character starts slowly and builds into an epic finale where he takes center stage and delivers the final blow.  The ending is actually so shocking and sudden that you might not believe it’s done.  But it is, and you are only left with your thoughts of what happens next.

My only problem with the film ultimately is I’m not really vested in Louis Carrier’s backstory.  Why would $250,000 suddenly turn a repairman into a megalomaniac and terrorist who toys with the media in order to instill fear?  I’m not buying the motivation, and even when they attempt to explain and give us reasons for this turn to the dark side, the impact doesn’t hold.  Also, I would have liked to see Carrier and Ambrose meet at some point, but we only get phone conversations.  Don’t get me wrong, there is still plenty of impact in the film, it just makes a few mistakes along the way.

This movie is filmed in a 1.66:1 widescreen format.  Kino does a fine job with their restoration here by keeping the grain healthy but at the same time cleaning up the print, which couldn’t have been in that great shape (I can’t even find this film to ever have been released on DVD, though I assume there was a foreign release at some point).

The colors are excellent, and the scenery of France, Belgium, and a couple of other countries in between is quite lush and really adds to the depth of the film.  It’s one of those films that could probably do a ton of stage work, but they choose to immerse you further by giving you so many locales over the course of 93 minutes.  Furthermore, the restoration here does everything to highlight those choices.

The sound to this film is presented in DTS HD 2.0 Master Audio in French with English subtitles.  Dialog is clear for the most part, and the score really stays in the forefront.  However, this might be the one area where the film does show its age, as certain parts are inaudible and weaker than they should be.  Furthermore, the subtitles have some issues, too, as not everything is translated, and the English that is included for a few scenes is not subbed at all.  I don’t think I truly missed anything, but I do feel there could have been a little bit of extra attention paid to the audio track and subtitle translations.

Audio Commentary by Film Historian Howard S. Berger, Steve Mitchell and Nathaniel Thompson:  The trio start out the film talking about the disturbing aspect that this film was probably written as a warning when it in fact it was rather prophetic about the future of media manipulation.  It certainly had elements of Taxi Driver as they explain how this movie took a little bit from a bunch of movies and worked it together.  While the 70’s was generally a “happy time” for most of the public, this film was certainly written from a very pessimistic point of view.  They also enjoyed how all of the characters were two sides to a coin and not one-dimensional.  The commentary, however, was kind of dry, and for me I am way more partial to scene-specific commentary, and this was just a bunch of impact and whole concepts.  I do believe they were watching the film, but they weren’t speaking to details or offering anecdotes about specific scenes along the way.

Armageddon Trailer 3:37:  This one is entirely in French; no subtitles are provided either.  From the music, it seems much more sinister than what was ultimately provided.  A little long (as older trailers tend to be), but certainly drives home the point of the film.

Others Trailers:  This includes Diabolically Yours (3:31); Farewell, Friend (4:02); The Sicilian Clan (2:21); Un Flic(4:23); and the Widow Couderc (2:47).  These are all films that Alain Delon is in.  All are spoken in French and subtitled in English with the exception of The Sicilian Clan which is obviously still a French film; they just opted to do the English moderator movie voice instead.  Un Flic is also different from the others, as they show a 3 1/2 minute scene followed by some hype to finish it out.  Honestly, the only one to stand out for me was Diabolically Yours, which Kino put out about 2 1/2 years ago on Blu-ray.

The film is actually adopted from a book titled The Voice of Armageddon by David Lippincott.  From other information I can find on the film, Alain Delon was ridiculously hard to work with which led to his role being diminished somewhat.  As is, the film is much more focused on the antagonists of the film in Louis and Einstein as they manipulate the media to get the attention they want, which leads to a rather shocking finale.  I enjoyed the movie, but I couldn’t help to think that had Delon been at the top of his game and instead not looking bored most of the time, that this could have been an amazing film start to finish.

Kino does a great job here in showcasing the film with excellent video considering the assumed shape and age of the master.  The audio is serviceable, and unfortunately the extras don’t do anything to enhance the overall film, but at least there was some thought in order to provide an overall very good package.  For Alain Delon enthusiasts, this is not the film to start your viewing with, but  for Jean Yanne fans or people looking for a very good French thriller, it fits the bill.  If anybody wants a film where you will be talking about the ending for quite some time (I think it would be a fantastic piece for a film class on manipulation of media), then this would have to be high on the list.  Recommended.

Michael Durr has been reviewing movies for the better part of fifteen years now. He primarily enjoys thrillers, sci-fi, animation and even a little courtroom drama. His favorite films include Escape from New York, the Goonies and anything with Alyssa Milano. When he’s not praising Kurt Russell as the greatest actor of our time or scratching his head over a David Lynch flick, he’s spending time at home in Texas with his lovely wife, Lori and his amazing son. How they put up with him is a mystery, but even Basil Rathbone doesn’t have the time to solve that one.
Dexter: New Blood (Blu-ray) The Handmaid’s Tale: Fourth Season