Posted in: Disc Reviews by Brent Lorentson on December 16th, 2022 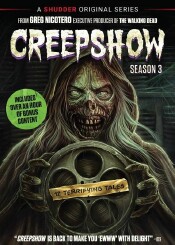 Over the past decade we’ve seen a resurgence in reboots, remakes, and anthologies, so it isn’t much of a surprise that the beloved horror anthology Creepshow would get the reboot treatment. To be fair, this is an extension from what the first films set out to be, though the big difference is instead of just being a film with a few stories, it is now a TV series, each episode containing two tales to horrify and entertain. When I first heard about the series, I was cautiously optimistic. The first two films I consider classics, as do many other fans of the horror genre.  Then there was that third Creepshow that I feel we all just want to forget and pretend never really happened. Without George Romero being around, I just wasn’t even sure I’d want to see a show that could possibly just water down everything that was great about the films and simply turn out to be a cheap imitation.  The first two seasons of the series I enjoyed, and they offered plenty of promise for things to come. How do Greg Nicotero and his creative team deliver on their third season endeavor?

Episode 1 is a bit of split bag. The first story, Mums, is a fun little revenge tale that involves some carnivorous plants, and the second story, Queen Bee, is a bit of social commentary about fans idolizing their celebrity heroes and going a bit too far in the name of fandom. The revenge aspect of Mums certainly makes this a fun story. I don’t want to spoil much with it, but it is definitely the stronger of the two stories. My biggest issue with Queen Bee is the actual creature effect. This is one where less would have been more, because I simply wasn’t a fan of the creature design, and it just took away from the potential creep factor of the storyline.

Episode 2 is definitely one of my favorite pairs of episodes, with Skeletons in the Closet and Familiar. The first story is one I’d imagine will go on to become a fan favorite of the series, just because it is a fun episode and is filled with horror movie references from start to finish. The main premise is that a couple is about to open up a horror movie memorabilia museum  with an exhibit that has real skeletons that have been used in a variety of horror films over the years, only the problem is a certain figure comes in that can ruin the grand opening for them. This one is a very silly and over-the-top episode, but I simply loved it, and the Psycho homage was simply perfection. The second story, Familiar, is a fun one that involves a couple that are on a date together and decide to see a psychic together. While the couple is getting a reading, the psychic passes a note to the boyfriend that says something bad followed them. This one is relatively simple but effective and with a fun ending that you come to expect from Creepshow.

Episode 6 is the other episode with a fun pair of stories. Drug Traffic has Michael Rooker playing a border patrol agent who has an encounter with a politician who is trying to expose the problems with our medical plans. The problem is the politician has brought with him a young girl that is sick, and what she has could kill them all. Michael Rooker shines in this episode, and he is fun to watch from start to finish.  The creature design I this episode is pretty cool, and there is some fun gore in this. This is also in my opinion the best executed episode of the season. This could easily have been fleshed out into a little feature film, and I would have loved it. Then there is A Dead Girl Named Sue that is shot in black & white and is about the dead rising from their graves, and the police chief is doing his best to maintain control of his small town. This story takes a couple fun and dark twists, and at the end it has one heck of a fun payoff.

Now, there are some duds in this season. OK, I’ll Bite was mostly my least favorite, and it has nothing to do with my hatred of spiders. This one just was a slow burn for a predictable payoff. Then there is Stranger Sings in Episode 4 that just doesn’t hold up to the other episodes in the season. It’s not bad, but just meh.

Greg Nicotero definitely has done a good job with the series, and sure, you can see that there were some budget restraints, but the final product was still enjoyable and I had a good time with it.

Creepshow Season 3 is presented in the aspect ratio 1.78:1.  The 1080p image is arrived at with an AVC MPEG-4 codec at an average of 29 mbps.  One of my only major complaints with the series is how polished it looks while at the same time looking too digital. The image is too polished and clean, and it really takes away from the old comic book and film feel. The color palette comes through nicely, but some of the nighttime stuff or low-lit scenes are missing a lot because it’s over lit and we see too much. In Episode 6, the story A Dead Girl Named Sue does a fairly good job with the B&W, though I wish they added some grain to at least attempt the film look. Personally I wasn’t a fan of them adding color to certain objects.

The DTS-HD Master Audio 5.1 track is definitely put to work in this series.  Most importantly the dialog is clean throughout, but it’s the foley work and sound mixing that really gives the show some character and helps bring it to life. This season seemed to rely more on the sight gags than building suspense with the sound design, though I did like some of the work in the Drug Traffic story and Familiar.

Amazon’s Comic-Con @ Home Panel: (35:07) A fun panel with some of the producers and filmmakers involved with the third season of Creepshow.

Behind the Scenes Raw Footage: (38:12) One of the best parts of this is seeing the practical FX used during the making of the series.

If you enjoyed Season 1 and 2 then Season 3 will be a blast for you. This hits on all the right cylinders with all the great throwbacks and homage paid to the classics of horror cinema.  As an anthology, this is certainly becoming a favorite, with several episodes I feel are worth revisiting. There are rumblings that this might be the last season for Creepshow, and there are rumblings of a shakeup occurring at Shudder. Hopefully this won’t be a bad thing, because honestly Shudder is my favorite streaming service out there.

Brent Lorentson is a horror writer and film critic based out of Tampa, Florida. With a BA in Digital Film, he co-wrote and co-directed Scavenger Hunt. His short stories have appeared in various horror anthologies. In 2019 his short script Fertile Blood will be a part of the anthology horror film Slumber Party. He is currently working on his first novel A Dark and Secret Place set to be released in late 2019. Favorite Films: Taxi Driver, Fight Club, I Saw the Devil, The Wild Bunch, Dawn of the Dead, A Clockwork Orange, Pulp Fiction, Heathers, The Monster Squad, and High Fidelity.
Holiday Gift Guide Spotlight: Warner Brothers Television On Blu-ray Holiday Gift Guide Spotlight: Paramount UHD/4K Releases