Galaxy Quest is an odd movie. It opened on Christmas Day of 1999 and did alright in the box office gathering roughly 71 million and some change. It was one of those movies that you went to go see and would laugh a lot but wouldn’t tell anybody in fear of people making fun of you. So it did respectable sales, but nobody knew the full potential of the movie until it hit the video format. The movie found a considerable audience and after many years, the movie holds up. Possibly better than it ever did nine years ago in a tiny theater. Now, with the release of a deluxe edition many years later, the movie can reach new audiences. Hopefully, they will be able to appreciate it as much as I did.

Once upon a time, Galaxy Quest was an entertaining space drama. It lasted only four seasons but found an audience that lasted many years later. The cast however has for the most part not been able to find reasonable work, reduced to conventions and lowly promotional work. There is Gwen DeMarco (played by Sigourney Weaver in a blonde wig) who played Tawny, the Computer Officer of the Protector and served as the beauty on the ship. Alexander Dane (played by Alan Rickman) plays Dr. Lazarus serves as the resident Spock/intelligent alien and is positively sick of his catchphrase (By Grabthar’s hammer, by the suns of Warvan, you shall be avenged!).

Then there is Jason Nesmith (played by Tim Allen) who played Commander Peter Quincy Taggart. Jason rose to the most fame of the space crew and basks in the glory of his early day stardom. The crew finds themselves at a convention where they are the main attraction. Jason shows up fashionably late and is scolded by his crewmates. They go on to do the show and inevitable after show autograph session. After Jason excuses himself to go the bathroom, he hears a couple of fans going on about how pathetic they think he is from a nearby stall.

He goes back to his autograph desk where he signs a bunch of 8 x 10’s like he’s in an assembly line. He ignores devoted fans and even ignores a group of aliens known as Thermians since he dismissed them as obsessed fans and not the real thing. Jason spends the rest of the night drinking himself into a stupor. He wakes up to the sound of tapping on his glass door. It’s the Thermians from the convention and they feel blessed to be in his presence and request they join them aboard their spaceship. Jason, mistakenly thinking that this is a gig, decides to join them (still well hung over).

Once Jason is aboard the spaceship, he goes through the motions as he assumes he is part of an amateur episode of Galaxy Quest. He acts as the commander of the ship and even tells the Thermian race to fire upon their mortal enemy: Sarris (played by Robin Sachs), a reptilian humanoid warlord in a negotiation. Jason then asks if he can go home. The Thermians oblige as they send him home in a gelatinous pod. Upon re-entry into Earth, the commander realizes this is very real and alerts the other cast mates of his astonishing discovery.

The cast mates are not sure what to make of it and simply think that he is drunk and is hallucinating. However, they decide to join him anyway when they think it is for a gig. But as with Jason, once they get on board of the ship, they realize it is very real and that the Thermians think that they are really a space crew that can help them. From studying the “historical documents” (television episodes), they have modeled their ship down to the smallest detail after the series. Even the mysterious Omega 13 (which Sarris wants). Somehow, the crew of Galaxy Quest must figure out how to act like a real space crew and save the Thermian Race from the clutches of the evil Sarris.

One of the great things about some movies almost ten years later is how many different personalities can fit inside these films. There is Tim Allen, Alan Rickman and Sigourney Weaver. But in addition to those main actors, there are a good variety of actors who used this film as a pilot for their success. There is Justin Long who plays Brandon. You might know him as Mac Guy or from Dodgeball. There is Tony Shalhoub who plays Fred Kwan, the ship’s engineer. Mr. Monk plays a burn-out actor who falls for an alien. Awesome. Sam Rockwell plays the role of Guy Fleegman who was only in Galaxy Quest for one episode and spends the entire movie wondering how he is going to get killed. He’s gone on to do a ton of movies, both big budget and independent. He was even up for the role of Iron Man before losing it to Robert Downey Jr.

The cast of actors and actresses are simply brilliant in the film. They play the roles completely straight and deliver the biggest laughs in the process. The film works so impressively because it isn’t a spoof. It’s a parody, it’s a satire, and it is a good old-fashioned drama rolled into one movie. The acting is top notch and the effects make it look a lot more than the mere $45 million dollar budget it got rolled into. There is very little to complain about in this movie and any actual issue I have the movie is picky at best.

The film is presented in 2.35:1 Anamorphic Widescreen. The movie looks about as good as it did back in 1999. The colors are solid and everybody looks good (especially Sigourney who looks really good as a blonde, call me surprised). The effects look great and a lot of care was taken to make it looks as real as possible.

The audio is provided in Dolby Digital 5.1 English and Spanish. Once upon a time, there was a DTS track provided as a separate edition since back in 1999, not everybody had a DTS capable receiver. But unfortunately the original 5.1 DD track is the only one that made it to the deluxe edition. The surrounds are decent but a good portion of it is dialog driven. There are some explosions but you just feel like something is missing. Subtitles are also provided in English, Spanish and French.

Galaxy Quest is a fine movie. I had seen it when it first arrived on dvd and a couple of times shortly after that. I wasn’t sure it would hold up. A little nagging part of me almost didn’t want to watch it in fear of not laughing at the same bits I did. I laughed at those bits. I laughed at new bits I hadn’t noticed before. This is one of the most brilliant comedies in the last ten years. The cast is fantastic and the acting is just as good. The disc is also pretty decent with a very good video and audio and all the extras you can think that doesn’t involve a cast commentary. My only gripe is the lack of the DTS track which exists in a prior edition. I look forward to the inevitable blu-ray version which better include a DTS master track or else By Grabthar’s hammer….oh nevermind, you know the rest. Highly recommended. 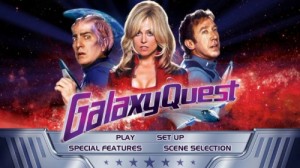 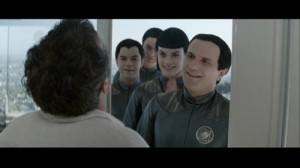 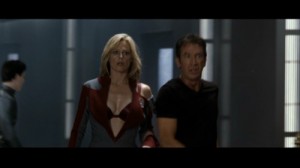 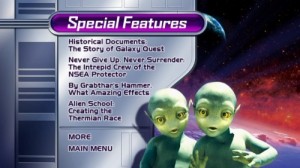 Michael Durr has been reviewing movies for the better part of fifteen years now. He primarily enjoys thrillers, sci-fi, animation and even a little courtroom drama. His favorite films include Escape from New York, the Goonies and anything with Alyssa Milano. When he’s not praising Kurt Russell as the greatest actor of our time or scratching his head over a David Lynch flick, he’s spending time at home in Texas with his lovely wife, Lori and his amazing son. How they put up with him is a mystery, but even Basil Rathbone doesn’t have the time to solve that one.
Frankenhood The Man Who Shot Liberty Valance