Most people who read this site frequently are aware with my love for cartoons. More often than not, my favorite cartoons are those from the 90’s or 80’s cartoons and included such shows as Batman Animated, Teenage Mutant Ninja Turtles, and Darkwing Duck. But there are some cartoons that have been made in the last decade that twenty years from now will be considered classics. As it turns out, I got to review one of those modern classics with the help of a very special and biased friend.

Hi there, my name is Michael Durr and you might remember me from such great reviews as Superman: The Complete Animated Series and Duckman, Seasons 3 and 4. Today, we are talking about Johnny Bravo: Season One. Johnny Bravo was a fantastic cartoon on the Cartoon Network that premiered on July 7th, 1997 and would then last sixty seven episodes until it ended in the hot summer of 2004.

Many thought it when it first aired that it didn’t have the muscle to last one season, Johnny proved them wrong and became one of the Cartoon Network’s iconic characters. So iconic, even the title character’s catchphrases are often used in popular culture still today. “Ooohhh Mama”. Hi there, Johnny. That’s right kids, Johnny Bravo has joined me today to help me explain a little bit about the show and offer some choice comments for the kids listening at home.

(*the next section will be taken over by Johnny Bravo, we apologize in advance*)
That’s right kids, I’m Johnny Bravo, Johnny B. Mickey asked me if I wanted to talk about this show, cause he’s so fine, he’s so fine he’ll…”Johnny!, stay on topic.” Yeah, whatever. Hey, Wanna see me comb my hair, really fast? “Johnny the show!” Mister, I don’t think you realize who you’re talking to. I’m Johnny Bravo, the one-man army.
(*this section has been sacked out of respect of sanity*)

Alright, we’ll do this. I’ll describe the show and you can add comments along the way, Johnny. Okay? “Yeah, Whatever”. Johnny Bravo is the man’s man. He’s got muscles, goes after the chicks and talks like he had a full body blood transplant from Elvis Presley. “Mmmmmm, peanut butter and banana”. Johnny unfortunately usually fails with the chicks and finds himself in a mess due to his narcissism and dim-wittedness. “Narciss-a-what?”

Usually, the shows revolve around Johnny trying to get a chick to fall in love with him. Most of the time, he ends up in one pitfall after another and ends up in the same place as before. Except Johnny is usually a lot worse for wear. Johnny does have some co-stars with him including his Mama, “Woahhhh Momma”, and little Suzy, a 12 year old girl who has a major crush on Johnny. “She needs to come back in fifteen years when she’s a co-ed”.

“Enough about me, let’s talk about you. What do you think of me?”

Well Johnny, I actually think your cartoon is fantastic. Created by Van Partible, this show was about putting Johnny Bravo in the most ludicrous of situations (as long as they involved him going after a female) and creating some of the best one-liners and jokes that the writers could think of. Despite the fact that Johnny cared more about himself than the person next to him, you couldn’t help but sympathize with Johnny just a little bit. Well, after you were done laughing at him anyway.

Perhaps Johnny’s strongest asset, even in season one, was how the various episodes were able to mix in various pop culture aspects. In probably one of the most famous episodes, Bravo Dooby Doo, Johnny meets up with the gang from Scooby Doo to solve a mystery. “Jinkies? Isn’t that a breakfast cereal?” This in turn would produce some of the series’ most side splitting moments. Other guest stars for the first season would include Farrah Fawcett, Adam West and Donny Osmond.

The show also had some heavyweights in weighting in the writing room. The most recognizable face is Seth MacFarlane who would later be famous for Family Guy. Also, another writer for the show was Butch Hartman who would later take on the reigns of another show called Fairly OddParents (also one of my favorites). Add this strength to the backing of the Hanna-Barbera production staff and you had a true super-heavyweight cartoon.

The video is in 1.33:1 fullscreen presentation. Since Johnny Bravo is a product of late 90’s animation and have some heavyweights from the Hanna-Barbera camp, one would expect this cartoon to have some quality visuals. “Man, I’m pretty.” For the most part, Johnny is pretty, the cartoon has good colors and some shots really show up well for their age. But then, there are others that seem a little worn and inconsistent with the rest of the production. Hopefully this score improves as the seasons continue.

We get a Dolby Digital 2.0 track for the show. Johnny sings, dances and provides a very clear and dialogue driven audio track. “Do the Monkey with me.” Johnny’s dialogue isn’t hard at all to decipher and the various sound effects come in as well as expected. Sometimes, you just wish that Johnny was available in the best sound possible and the 2.0 while accurate isn’t enough. Subtitles are provided in English and Spanish.

This two-disc set comes with a gorgeous quality slipcover. Unfortunately though, it also comes housed in a 2-disc eco case. I’m not expecting this to be housed in a Johnny Bravo head but a regular case without holes would be nice.

Cartoon Network’s early work like Johnny Bravo and Dexter’s Laboratory will hopefully be one day recognized as modern cartoon classics. Finally, the network is bringing them out slowly (Johnny came out this month and will be followed by Cow and Chicken and Courage, the Cowardly Dog). This set will allow the viewer to enjoy all thirteen episodes and the set looks like it wasn’t rushed and was put together with care.

The dvds look and sound as good as to be expected. The dvd set has three commentaries and some good assorted featurettes. This will hopefully be picked up by fans of the series and allow the rest of the seasons to come out. I want to give this set one of my highest recommendations for quality cartoon programming.

I also would like to thank Johnny Bravo for his input in this set. Johnny, do you have anything to add before we close out this review? *Silence* Well I guess Johnny found some ice cream, that’s certainly going to give him a toothache. “Chomp, chomp, chomp, AAAUGH! The PAIN! The Horrible PAIN! Mmmm…. Creamy! Chomp, Chomp, Chomp, AAAUGH! The PAIN! The stabbing knives of pain! Hey! It’s got nuts in it!” Enjoy kiddoes. 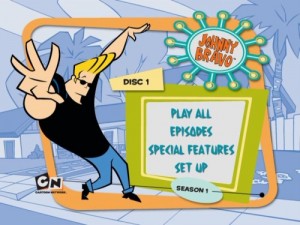 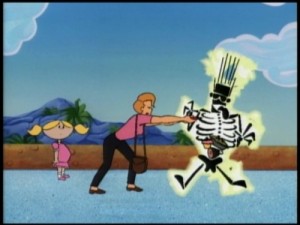 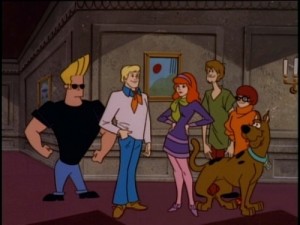 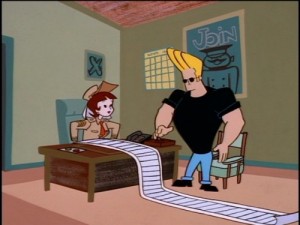 Michael Durr has been reviewing movies for the better part of fifteen years now. He primarily enjoys thrillers, sci-fi, animation and even a little courtroom drama. His favorite films include Escape from New York, the Goonies and anything with Alyssa Milano. When he’s not praising Kurt Russell as the greatest actor of our time or scratching his head over a David Lynch flick, he’s spending time at home in Texas with his lovely wife, Lori and his amazing son. How they put up with him is a mystery, but even Basil Rathbone doesn’t have the time to solve that one.
The New Adventures of Robin Hood: The Complete First Season My Three Sons: Season Two, Vol. 2