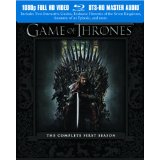 Very rarely, the stars align and a media magic event happens, creating a flawless television series. Such an event happened last year with the premiere of HBO’s Game of Thrones based on the novels from George R.R. Martin’s best selling and ongoing series A Song of Ice and Fire. HBO was so pleased with the series, it green-lit the second season only hours after the pilot premiered. Co-President Richard Plepler said, “We told George (R.R. Martin) we’d go as long as he kept writing.” The network projects topping $1 billion in international revenue and at $2.5 million an episode; it’s already double what they made on The Sopranos.

So this is usually the place where I would give you a detailed synopsis, but I feel that would do the show a disservice. The story takes place in the mythical lands of Westeros and Essos, where the ruling houses of the Seven Kingdoms vie for control of the Iron Throne, the centre of power in the realm. This epic campaign to rule the lands is known as a Game of Thrones.  Although there are fantasy elements, they are secondary to the human adventure and jaw-dropping plot twists. This is not Lord of the Rings made for TV, it is a sweeping character-driven saga incorporating a massive cast, but the writers never let the size of the story overwhelm the viewer.

Because the story takes risks such as never witnessed on television before, almost any further synopsis would serve as spoilers. This show should be viewed cold (winter is coming after all). DON’T LET ANYONE TELL YOU ANYTHING ABOUT THE PLOT! It does demand you pay attention, but it is never boring or difficult to follow. The unthinkable happens. The story is unpredictable and deeply rewarding. It will leave you reeling in shock and cheering aloud. If you are like millions of others, including myself, you will probably end up reading the books after you watch the season (maybe even more than once).

You are first immersed in the world of the Starks, a noble bloodline ruling over the northern kingdom of Winterfell. We meet the family’s patriarch, Eddard “Ned” Stark (a phenomenal performance by Sean Bean) and his sons and daughters. From there the series slowly spreads its web over the lands as we meet the other ruling families. There are so many breakout performances it proves very difficult to single out just a few for this article. The fan favorite and Emmy-winning character of Tyrion Lancaster (Peter Dinklage) stands out, but so does conniving Queen Cersei Lannister (Lena Headey), her lover and twin brother Jaime (Nikolajj Coster-Waldau), as well as the brooding, female fan favorite Jon Snow (Kit Harrington). There really isn’t a bad performance in the lot. I feel like I should just list the entire brilliant cast, but that would take the length of several reviews.

Just having the first season of Game of Thrones on Blu-ray is reason enough to purchase the set, but HBO loads it with so many wonderful special features you can spend hours geeking out over the show with animated histories, In-Episode Guides, Anatomy of an Episode and hidden Dragon Eggs. These extras will help initiate the newbies to George R.R. Martin’s elaborate and incredibly rich world of characters, lands, and mythologies. Those familiar with the books with the novels will be thrilled to see this information articulated on screen.

Wow. Just wow. What an amazing 1080p/AVC-encoded presentation running an average of 30 Mbps. This is possibly the finest HD video release HBO has done yet, and that is saying a lot. It looked great broadcast on HD television, but the Blu-ray takes it to new levels, providing stunning detail, breathtaking clarity and color, perfect blacks, natural skin tones with no distortion, no banding, no artifacting, no noise, no aliasing and no smearing. Wow.

HBO’s DTS-HD Master Audio 5.1 surround track is every bit as incredible as the video presentation. Perfectly mixed, deeply immersive in the surround;  richly realized soundfields draw you into the story. Whether whispered or screamed, the dialog is captured perfectly and never overwhelmed by the music or SFX. The LFE channel constantly supports every rumble, storm or clash of war. This HBO release sets the bar very high in sonic impact.

This is the must-own Blu ray set of the year and we’re just two months into 2012. Game of Thrones is more than just one of the best new series of last year, it is one of the finest series to ever grace a television screen, and we are just one season in. I am aware of how hyperbolic that must sound, but it is the truth. The writing, directing and acting are so top-notch it feels like each episode is a season finale. Season Two begins in April, so pick up this set and get on board with one of the greatest television experiences of all time.

“When you play the game of thrones, you win or you die. There is no middle ground.”