Posted in: Disc Reviews by Archive Authors on July 31st, 2012 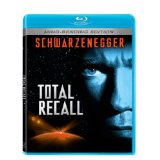 Perhaps one of the best known science fiction authors ever, Phillip K. Dick’s short stories and novels have been the basis for many film adaptations including The Minority Report, Paycheck, A Scanner Darkly, Blade Runner, and the upcoming release Next. Of course the reason I mention Phillip K. Dick is because Total Recall is based upon his story We Can Remember It for you Wholesale. In the past Total Recall has been known for quite a few reasons – its achievements in special affects, its high budget, the re-launch of Sharon Stone’s career – but ultimately when we think of Total Recall we all think of the big guy himself, Arnold Schwarzenegger.

Set in 2084, Douglas Quaid (Arnold Schwarzenegger) is an average-joe construction worker who as of late can’t stop dreaming about being on Mars. Though there is in fact a population on Mars, it is a conflict zone unsafe for travel as the tyrant Vilos Cohaagen has a monopoly on the oxygen which is heavily disputed by a group of rebels. Instead Quaid goes to Rekall – a company which will implant memories into his mind making him believe he was in fact on a vacation to Mars. Quaid opts to go for the vacation where he is a secret agent on a special mission on Mars called “Blue Skies on Mars.” While undergoing the procedure alarms start going off, it turns out that Quaid’s mind has already been altered; he has an outburst which results in him being subdued and his memory of ever going to Rekall erased.

Quaid returns home, but while on the way is attacked by his friends, whom he ends up killing. When he makes it home he is met by a hostile wife (Sharon Stone) who attacks him as well. After a short fight between the two, Quaid learns that his wife, his life, and all his memories are fake – only implanted into his mind. A confused Quaid grabs a video case he left to himself before his memory was erased, which enables him to start piecing together his life, and his important role on Mars. Before he can get more information out of his wife, Richter (Michael Ironside), an employee of Cohaagen begins pursuing him with the intent to kill. Quaid flees to Mars where he starts piecing together his importance and his past which on the surface is fairly simple, but the complexities behind his life begin to grow, and the line that divides reality and memory begin to clarify.

Total Recall is a classic piece of science fiction cinema with a captivating storyline that surprisingly wasn’t overly simplified from Dick’s original writing. The story is in fact pretty solid and goes beyond what you would normally expect from an Arnold picture in terms of story, not action. Let’s face it, the whole reason this movie has classic status is because of Arnold, it seems that no matter how horrible a movie is it still remains memorable because of our Austrian friend. But mix Arnold’s undeniable star power from that era with a solid storyline and you end up with a classic. Aside from Arnold’s dependable ability to make almost any action movie memorable, there was another actor who stuck out in my mind; Canada’s own underrated and under rolled Michael Ironside, who played a great role as the cynical Richter.

For when it was released Total Recall is a great movie, but by today’s standards of action and effects it may not offer enough for new viewers to enjoy. Still, the story is really interesting, and I suggest everyone watches this movie at least once.

Presented in a 1080p 1.85:1 aspect ratio. Throughout the film and especially when on Mars, colors can look crisp and vibrant, although detail does remain a bit soft. The film went through a restoration that appears to be primarily color correction. Detail is much better, but a few of the matte shots don’t blend as well now. Black levels are average for a high-definition presentation. The print is very clean.

The DTS-HD Master Audio 5.1 is an improvement. These tracks do sound surprisingly good for its age. Rear channels are consistently in use as is the bass. The scene where Quaid destroys the annoying Johnny Cab sounded great and still put a smile on my face after all these years. Dialog surprisingly didn’t sound tinny or flat; there were also a few nice subtle effects scattered throughout the film that flush out what would be an otherwise heavy front channel track. Although these tracks do not sound as good as an uncompressed one would, they still do a good job in presenting Arnold’s ass-kicking ways.

Interview With Director Paul Verhoven: (34:47) HD The director looks back on the film and is very candid about issues and what worked. He’s quite animated and can’t really keep still. It’s a nice conversation that does overlap with a provided Audio Commentary.

Making Of Total Recall: (8:23) SD This is a vintage promo piece that is meant as an extended trailer for the film’s release.

The Special Effects on Total Recall: (23:15) HD These are really two interview pieces. The first is with Mark Stetson who did the miniature work on the film, and the second is with Tim McGovern who handled the skeleton CG sequence.

Imagining Total Recall: (31:29) SD Another older piece that features cast and crew looking back on the film. It’s a straightforward narrative piece that takes you through production from pre-conception to finished film.

Restoration Comparison: (5:13) HD They use a pretty washed-out print for the before shots to make the restoration a bit more dramatic.

Without sounding too contradictory, Total Recall is and will always remain a classic too me; call it nostalgia or me just loving Arnold Schwarzenegger. But being as unbiased as I can, and as well as Total Recall was written it just isn’t for everyone, and at times could be considered slow and lacking of action as a typical Arnold movie would have. So ultimately, Total Recall isn’t up to par with some of the big name science fiction movies like Star Wars or even Bladerunner, but it still provides a solid cinematic experience that will be sure to impress most science fiction fans.