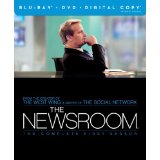 “In the old days, we did the news well. You know how? We just decided to.”

Sounds simple enough, so what’s keeping everyone from doing the news well? Well, other than a country that feels more politically polarized than ever and a population that mostly seems interested in cherry picking the “facts” they’d rather hear, I can’t think of a single thing. In fact, HBO’s The Newsroom pointedly compares the idea of putting on a quality news broadcast that educates the electorate and earns great ratings to Don Quixote embarking on one of his foolish quests.

Will McAvoy (Jeff Daniels) is the anchor of “News Night” on the fictional Atlantis Cable News network. The affable McAvoy is considered the “Jay Leno of news anchors” because his immense popularity comes from an unwillingness to take chances. We catch up with Will right before his world gets turned upside down. While taking part in a panel at Northwestern University, a co-ed asks him what makes America the greatest country in the world. After the moderator presses for a substantial answer, Will unleashes a rant that might’ve made Wes Mendell cringe.

The Newsroom is the latest television effort from Aaron Sorkin, an Oscar winner for his Social Network screenplay and best known for creating The West Wing. This is Sorkin’s first collaboration with HBO, which famously allows top TV talent to have creative freedom. The result, for better and worse, is the most Sorkin-y show yet. There’s the fact that this is Sorkin’s third TV show about a TV show (after Sports Night and Studio 60 on the Sunset Strip). There’s also the open contempt for the internet (usually expressed through Will) and the Broadway references that crop up in each episode. (Sorkin, who is credited as a writer for every season 1 episode, got his bachelor’s degree in musical theater.) The Newsroom walks and talks like a prestige drama with the loftiest of aspirations, but Sorkin seems more interested in staging everything like it’s a screwball comedy straight out of the 1940s.

The lighthearted approach is smart because it’s impossible to watch parts of The Newsroom without getting the nagging feeling that “Aaron Sorkin is smarter than you, so you’d better listen when he tells you what you should care about.” A mini-twist toward the end of the first episode/“We Just Decided To” reveals the show takes place in the near past and covers real-life events. It’s an ingenious move that gives Sorkin and his characters the benefit of hindsight as they scramble to cover the BP oil spill, the killing of Osama bin Laden, the Casey Anthony trial and more. Will is also presented as a moderate Republican so that he/Sorkin can lob bombs at the more extreme members of the party. Tea Party members take the brunt of the punishment, but Sorkin can’t help from going after the entire party. (Most notably in Ep. 9/“The Blackout Part II: Mock Debate.”) To be fair, the writer has no interest in presenting Will as an impartial observer; it’s clear he likes his news anchors to have an opinion.

Even though Will (not unlike Sorkin, I suspect) wears his pompous attitude on his sleeve — he actually concludes a great speech at the start of Ep. 3/“The 112th Congress” with, “We are the media elite” — the characters are not infallible. Will’s “mission to civilize” everyone in Ep. 4/“I’ll Try to Fix You” and his attempt to completely reinvent the format for televised debates came off just as misguided and unrealistic on the show as they would in real life. I do wish the rest of the “News Night” characters weren’t quite as cartoonishly inept in their love lives. I understand the personal/professional life dichotomy Sorkin is going for, but sometimes these people are so goofy that I wouldn’t trust them to run my dishwasher, much less a live television show.

Thankfully, The Newsroom has an excellent cast filled with performers well-equipped to handle the material. (Most have extensive experience performing on stage — which is a big help with Sorkin’s hyper-literate scripts — while Munn has pseudo-news experience thanks to Attack of the Show! and The Daily Show.) Daniels is marvelous as McAvoy, serving as the leader of the ensemble the same way Will is the captain of “News Night.” He’s got the gravitas to deliver Will’s on-air screeds as well as the comedic touch to perform a pratfall.

Mortimer’s often flighty performance as Mac was less jarring the second time around. (Same goes with Pill’s work as Maggie.) When season 1 originally aired, I struggled to believe someone who was supposed to be as competent as Mac could be such a flake outside her control room. Watching the show again, I realized the male characters were doofuses in their own ways. Gallagher does some Jim Halpert things as his Jim Harper flirts with Maggie while she repeatedly breaks up and makes up with Don. Speaking of Don, I immensely enjoyed Sadoski’s brand of jerkiness (the twist is Don’s actually a good guy) and the underused Munn was something of a revelation. Sloan is supposed to be the “socially awkward” one, but Munn gives the most assured performance besides Daniels. Waterston is also terrific as the crusty, paternal figure. (Think Robert Guillame’s Isaac Jaffe in Sports Night.)

And that’s just the regular cast: guest stars include two-time Oscar winner Jane Fonda as Leona Lansing, the powerhouse CEO of ACN’s parent company (the revamped “News Night” is hurting her business interests); David Krumholtz as Will’s sharp, youthful therapist; Terry Crews as the bodyguard Will (verbally) spars with; and Chris Messina as the president of ACN (and Leona’s son), who is obsessed with ratings and isn’t thrilled with the show’s new direction.

It’s tempting to draw a straight line between Will’s fictional mission and what Sorkin is trying to accomplish with this show. While Will’s quixotic quest is idealistic to the point of being impractical, Sorkin’s earnest attempt to elevate the TV drama feels a little extraneous on HBO, which has been elevating the TV drama for the better part of the 21st century. That being said, I’ll still take Sorkin’s bursts of genius wherever I can get them.

The Newsroom: The Complete First Season is presented in its original aspect ratio of 1.78:1. The 1080p image is arrived at with an AVC MPEG-4 codec at an average of 25 mbps. Even before Sorkin repeatedly referred to his show as a throwback to TV series of the 1990s, I figured this Blu-ray wouldn’t be a visual feast on par with HBO spectacles like Game of Thrones or Boardwalk Empire. The old-fashioned presentation is fairly straightforward, highlighted by a solid HD image with subtle grain. Color and contrast are strong, and flesh tones are nice and warm. It’s important to note the pilot looks considerably softer and has more noticeable filmic grain than any other episode in the series. (The switch to a slightly slicker, digital look is a welcome change overall.) Overall, this is a less glossy and more pleasingly realistic presentation than I expected.

The DTS-HD Master Audio 5.1 track seems to be keenly aware that — no matter how great Daniels is — Sorkin’s dialogue is the real star of the show. Not only are the words always clear and crisp, but the track juggles the constant overlapping dialogue beautifully. The audio track’s second most important job on an Aaron Sorkin show is bringing the buzzy office scenes to life. Here, we get a dynamic sound field that utilizes the rears consistently without ever slapping us in the face. The subs are pretty quiet throughout, but we still get a strong sense of immersion whether we’re in the newsroom or at after-hours hangout Hang Chew.

The Rundown: (25:30) Sorkin is joined by co-producers Alan Poul and Greg Mottola, as well as cast members Daniels, Mortimer and Waterston for a roundtable discussion about the entire first season. Sorkin cops to enjoying working on a farce because it’s a mistake to consciously try to write something “Important.” He also reveals the decision to use real-life events from the recent past came because he didn’t want to make up fake news. It’s an interesting, jovial discussion, but a lot of what is said is repeated elsewhere in the special features. Available on Disc 5.

Mission Control: (5:17) A behind-the-scenes look at the main set. I happen to work in a real-life newsroom, so I admit to being more interested in this featurette than most people. It really is an impressive recreation of a modern-day newsroom. Or as Daniels says, “Throw a satellite on top of the roof, and we can broadcast.” Available on Disc 5.

Inside the Episodes: (33:12) These segments are less than five minutes long and probably fit snugly at the end of each HBO broadcast. They feature Sorkin dishing about every episode. This could’ve easily been a throwaway, but Sorkin actually gives some valuable insights into his characters. (He admits Will was naïve to think his radical debate format would be accepted; we also learn Will’s rant from the pilot wasn’t in the original script…we were only supposed to hear about his meltdown after the fact.) Features a Play All option on each disc.

Audio Commentaries: Five commentary tracks (Eps. 1, 3, 4, 6, 10) featuring Sorkin, Poul, Mottola and almost everyone on the cast. Not surprisingly Sorkin leads the way on most of these, and we get great insights about television production along with amusing personal stories. (Sorkin reached out to Congresswoman Gabrielle Giffords the week before the episode covering her shooting aired to give her a heads up; turns out she was a fan of the show.) The group covers everything from the show’s “aggressively unhip” opening credits sequence — no one is doing bad things with anyone — to Mortimer’s double chin. The best track is the packed commentary for the finale, which also manages to provide some season 2 teasers. (Fellow ACN anchorman Elliot Hirsch is moving to daytime, and Sloan is taking his place with Don as her executive producer.)

Deleted Scenes: (5:36) There are only five scenes and they’re all pretty inessential, though one of them has Sloan popping up in the first episode to sorta flirt with Jim. (Munn was almost completely absent from the pilot.)

Season 2 debuts July 14. The Newsroom already has frequent flashes of brilliance, but I’m curious to see how interested Sorkin is in shoring up some of the show’s flaws. HBO has put out another handsome set with this Blu-ray release; it may not blow your mind visually, but fans should eat up the bonus material. (Especially the commentary tracks.)

Like its hero, The Newsroom reaches for greatness but doesn’t always succeed. Even when the hero — or a prolific TV mastermind — comes up a bit short, that’s a quest worth taking.