Posted in: Disc Reviews by Brent Lorentson on June 13th, 2013 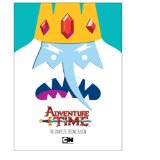 This is my second trip to the land of Ooo, and this time I’d have all of season 2 to kick back and enjoy the weird and crazy adventures of Jake the dog and Finn the human.  Fans of the show seem to have been clamoring to have entire seasons of the show released as a whole, rather than the compilation packs that have been released in the past.  With this season 2 release there are 26 episodes together on one disc and running a little over 5 hours.  Having just survived season 2, I feel it’s safe to say the show is something that will grow on you, but really like anything else should be indulged in small doses rather than a marathon viewing session.

The show doesn’t have anything that resembles a linear storyline; every episode can stand on its own, which makes it accessible for anyone to sit down and start enjoying the fun.  Guardians of Sunshine stands out from the rest for me, where Finn and Jake get sucked into their friend BMO (who happens to be a video game console), and they are forced to take on the three big bosses of their favorite video game.  This is a concept that most gamers I feel at some point have all fantasized about, whether it be to live in Zelda or even Grand Theft Auto, to live in this alternate reality would in theory be a blast.  Leave it to Finn and Jake to show the perils of video game life, though it was pretty awesome seeing the 8-bit versions of Finn and Jake in action.

The reoccurring villain throughout the series seems to be the Ice King; he’s somewhat of a pitiful villain since all his evil schemes seem to involve him trying to find someone to fill his lonely void.  Whether it’s shaving his magical beard and trying to enchant the princesses of Ooo to believe he is the “Nice” King or kidnapping a nurse and bringing her to his not-so-secret lair, I still kind of feel bad for him.  Maybe I missing something, but the way Finn and Jake treat the Ice King, it’s hard to say they are much better than him, and it kind of clouds the idea that Jake and Finn really fit the hero mold.  Then again, the show seems to do anything it can to avoid anything traditional.

As a show it seems to relish the fact that it is a trippy visual sensory overload, whether we are seeing our heroes do battle against a demon father, helping a slug find true love, or simply getting to see Finn sit down to eat soy human, every episode manages to deliver the unexpected but still be a solid coherent story that is wrapped up in 11 minutes.  Though I can’t say I’m on board and loving this show, I do see the wide appeal that the show does offer, and slowly it seems after enough watching I’ll be like the many avid fans who have swallowed the Adventure Time Kool-Aid.

Adventure Time Season 2 is presented in an aspect ratio of 1.78:1.  The 1080p image is arrived at with a VC-1 codec with an average of 18 mbps.  I wasn’t too sure what to expect with an animated series on Blu-ray, but after a couple episodes seeing how the colors seemed to come to life was unexpected.  The contrast from when we are in the brighter, happier places in the land of Ooo as compared to the dark underworlds is impressive.  Though the animation may on first glance appear sloppy, the more you watch and with every nook and cranny in this world they take you to, you realized how detailed and unique and fleshed out it all really is.  From the neutral home of Finn and Jake to the home of Princess Bubble Gum where everything appears “pretty”, it’s easy to appreciate the work the animators actually put in to bring this fantasy world to life.

The Dolby Digital 2.0 audio track is about the only thing that doesn’t deliver here.  For an animated series as visually pleasing as this and the world they created, a decent surround mix would be expected, but that’s not the case.  Though everyone sounds fine, the lack of surround does hinder the chance for any atmosphere to develop.

Audio Commentaries: The creators and performers actually took the time to record tracks for every episode on the disc.  Considering it’s five hours there are some quiet moments, but over all show creator Pendleton Ward leads the track and keeps it fun with plenty of behind-the-scenes insight into the show.

The Crew of Adventure Time, interviewed by Pendleton Ward: (6.16) An all too brief interview with members of the crew where they simply state their names and what they do on the show.  This is followed by us getting to watch those being interviewed watch something we can’t see, and we get to see their reactions.

Though I haven’t quite yet figured out the massive appeal for the show, I can still appreciate that it is still a good entertaining show the whole family can enjoy.  I’d like to see Finn and Jake eventually go on longer adventures that overlap several episodes if not their own mini-film.  There is plenty of fun to be had with the show, and the 26 episodes is enough to keep most kids busy for a few hours and has a strong rewatch value, so the value in making this Blu-ray purchase is a good one.

Brent Lorentson is a horror writer and film critic based out of Tampa, Florida. With a BA in Digital Film, he co-wrote and co-directed Scavenger Hunt. His short stories have appeared in various horror anthologies. In 2019 his short script Fertile Blood will be a part of the anthology horror film Slumber Party. He is currently working on his first novel A Dark and Secret Place set to be released in late 2019. Favorite Films: Taxi Driver, Fight Club, I Saw the Devil, The Wild Bunch, Dawn of the Dead, A Clockwork Orange, Pulp Fiction, Heathers, The Monster Squad, and High Fidelity.
Breaking Bad – The Fifth Season A Good Day to Die Hard (Blu-ray)