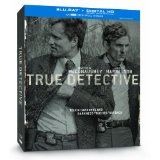 “You got a chapter in one of those books on jumping to conclusions?”

It’s easy to jump to conclusions with a name like True Detective. The moniker conjures up images of the true crime pulp magazines of the 40’s and 50’s. You might get a sense that this is one of those “based on a true story” type of shows. There was even a second when I expected we might have our first “found footage” television shows. Whatever ideas you have going in, expect your perceptions to change. Whatever else it is or is not, True Detective is one of the most unique and atmospheric shows I’ve had the pleasure to watch. And that’s just the opening credits.

The first thing you need to know is that this is not your standard television series format. The idea here is that each season will feature an entirely different cast in another location and likely in another era. It’s taking American Horror Story to the next level. Not even the cast remains. There are some serious advantages to us, the viewers, with this format.

First off, I can sit down to watch a season of television and know I’ll get a complete story. There isn’t going to be any cliffhanger or collection of questions that I won’t see answered for six years, if ever at all. Everything wraps up. I won’t say it wraps neatly. More on that later. It does wrap up.

The second advantage has to do with film stars seeing so much potential in television. Yet they can’t afford to commit to several years at a time. Tom Hardy recently spoke about the new television landscape. Actors get excited about doing film-quality work but with the kind of time to really get into their characters and more complicated stories. Getting to do an eight-hour film has a lot of appeal for many actors. Knowing that they only have to do it once finally puts that kind of artistic expression in anyone’s schedule. Who knows? That’s how we get the likes of Matthew McConaughey and Woody Harrelson to do this one. Maybe we’ll start seeing the likes of Al Pacino or Robert DeNiro opt for this kind of project. What better way to attract Johnny Depp back to his television roots? Cable has made it all possible, and finally we found someone who figured out how to take advantage of that potential. I suspect True Detective is merely the first of its kind. I hope not the last.

The show exists in three different time periods. If you like your stories to be very linear, this isn’t going to work for you. If you can roll with the times, you’re in for somewhat of a treat.

It all starts in 1995 in the Louisiana swamp country. Detective Rust Cohle (McConaughey) and Detective Marty Hart (Harrelson) have only been paired for a short while when they come upon the most horrific crime scene they will ever encounter. It will literally haunt the rest of their lives. A woman is posed bending over a tree trunk. She’s naked, wearing only a crude crown of vines and deer antlers. There’s obviously something ritualistic at work here. And so the chase begins.

In 2012 the two detectives have been long retired from the force. They’ve been called in to offer their thoughts on the case. It’s obvious to both there’s something more than two detectives trying to get a synopsis of an old case. They ask personal questions, digging for intimate details. They’re particularly interested in the event that broke them up in 2002. As the two detectives separately engage in the narrative, we’re treated to the story from 1995. We learn they are not reliable narrators, because what they tell the police does not always jive with what we see occur. This is subtle at first until eventually we hear a crucial event described that is radically different from the events we witness unfold.

Finally, in the last two episodes, the two reteam when they realize there’s unfinished business.

In 2002 the crime has been believed solved, and the pair have worked together for seven years. The toll of the case and their opposite personalities converge into an event that pulls them apart.

There are a lot of reasons why True Detective works. It starts with the writing. There’s no writing team. No writers’ room here. It’s all handled by series creator Nic Pizzolatto. He’s obviously a fan of film noir, and it shows most in the dialog. The pace of the episodes always feels slow and deliberate. At times it doesn’t appear the story is moving forward, but we always discover that it is. The tale unfolds in such a way that we don’t really notice the telling. We’re so engrossed in what we’re watching that time literally stands still. The case itself is less important than the journey it sends these two detectives on. For that matter, the material is visceral enough that we find ourselves on the same journey. The material is disturbing. Pizzolatto presents it all in a tableau from which we can’t look away.

After the writing you have to look at the casting and creation of these two characters. They are the most unlikely team. This isn’t a buddy cop movie. They might be a sort of friends, but they’re not buddies. Matthew McConaughey and Woody Harrelson share a very uneasy chemistry. It’s something forced together, but it works. The relationship is extremely complicated and filled with nuance served by both the writers and the actors.

They each actually play against type. McConaughey usually plays the straight kind of character while Harrelson is often just batty nuts. Here it’s McConaughey that plays the mentally unstable character. Rust is ill at ease with the world. He’s cynical and says the oddest and craziest things. There’s most definitely a dark side to Rust that makes him ultimately the most qualified to investigate this twisted crime. In some ways he understands the mind that can do this. He’s obsessive to a fault. He’s not going to let go of this until it either destroys him or he’s found his prey.

Marty, on the other hand, is the average joe. He has a wife and kids and does his best to at least imitate the suburban American life. He’s got his demons, but he hides them better that Rust. Rust gets on his nerves and makes him feel uneasy. But he respects the man and considers him scary smart. He reveals his respect when the 2012 detectives mention that they had Rust in to talk as well. Marty points out that they weren’t picking his brain, he was picking theirs. The series focuses on these two guys. Everyone else, including Marty’s family, are just well-developed props. They exist to give the character something or someone to react to and be influenced by. In the end it’s just Rust and Marty.

Next it’s the locations I’ve talked about already. These back-country swamps and fields form a sense of isolation for the characters and the viewers. I once caught myself thinking about caged animals in a zoo. These characters are, in a way, caged by this environment and put on their show by doing what comes naturally. The end result is quite compelling and more than a little mesmerizing.

I have both an anticipation and a dread for season 2. I’ll miss all of this, but I can’t wait to see if they can do it again. For now, you don’t need to wait. This one’s a keeper.

Each episode is presented in its original aspect ratio of 1.78:1. The 1080p image is arrived at with an AVC MPEG-4 codec at an average 20 mbps. This is a very visually stylish show. I can’t imagine watching it in anything but high definition. The cinematography is the kind of stuff that actually builds emotions and visceral responses from the viewer. The locations are dark and ancient. The place itself almost hangs on these characters with something like genuine weight. It’s a character, perhaps the most impressive character of the show. There have been a lot of Louisiana productions since Katrina, but you haven’t seen the state like this before. Black levels provide crucial shadow definition. There is more than sharpness and detail to be found here. There is a texture to this image unlike anything I’ve seen in a television production, cable or not. Like the swamps they depict, these images will suck you right in.

The DTS-HD Master Audio 5.1 is also more atmosphere than anything else. Dialog is the big value here, and you get it. Silence is an aspect this show does well at times. I wouldn’t say there was anything particularly aggressive about the surrounds, but there are subtle hints of eeriness here. The opening theme song is good enough that I let the credits roll with each episode. I don’t often do that. T-Bone Burnett knows how to tug at you emotionally with the music. It’s not the kind of sounds you usually associate with this part of the country.

Inside The Episode: Each episode has a short 3-4 minute behind-the-scenes feature. If you’ve seen other HBO releases, you know what these are.

Making True Detective: (15:02) Cast and crew tell us the usual stories with clips and behind-the-scenes footage. They lost a bit of credibility from me when they talk about the hardships of working out in swampland. They talk about having to remove dangerous snakes while the clip shows the crew dealing with a quite harmless king snake.

Up Close With Matthew McConaughey and Woody Harrelson: (8:03) The feature provides a casual sit-down with the actors and is scene specific to four scenes from the show. You can access them individually or the handy play-all.

A Conversation With Nic Pizzolatto and T-Bone Burnett: (14:35) The music is a powerful part of the show. Here the creator/writer sits down with T-Bone in his studio and talks about the music.

The writing, characters and locations form a sort of Holy Trinity for the series. It’s a perfect storm. It’s morbid curiosity. There’s something dark about all of us, but we can’t look away. True Detective provides the greatest rubberneck opportunity going. And you don’t have to worry about being rear-ended as you slow to get a good look. Linger all you want. If you can resist this show; then, “You’re the Michael Jordan of being a son of a bitch.”

Gino Sassani is a member of the Southeastern Film Critic's Association (SEFCA). He is a film and television critic based in Tampa, Florida. He's also the Senior Editor here at Upcomingdiscs. Gino started reviewing films in the early 1990's as a segment of his local television show Focus. He's an award-winning recording artist for Omega Records. Gino is currently working on his 8th album Merchants & Mercenaries. Gino took over Upcomingdiscs Dec 1, 2008. He works out of a home theater he calls The Reel World. Favorite films: The Godfather, The Godfather Part II, The Body Snatcher (Val Lewton film with Karloff and Lugosi, not the pod people film), Unforgiven, Gladiator, The Lion King, Jaws, Son Of Frankenstein, The Good, The Bad And The Ugly, and Monsters, Inc.
Alan Partridge (Blu-ray) Amen. (Blu-ray)